June election is bellwether for Democrats. 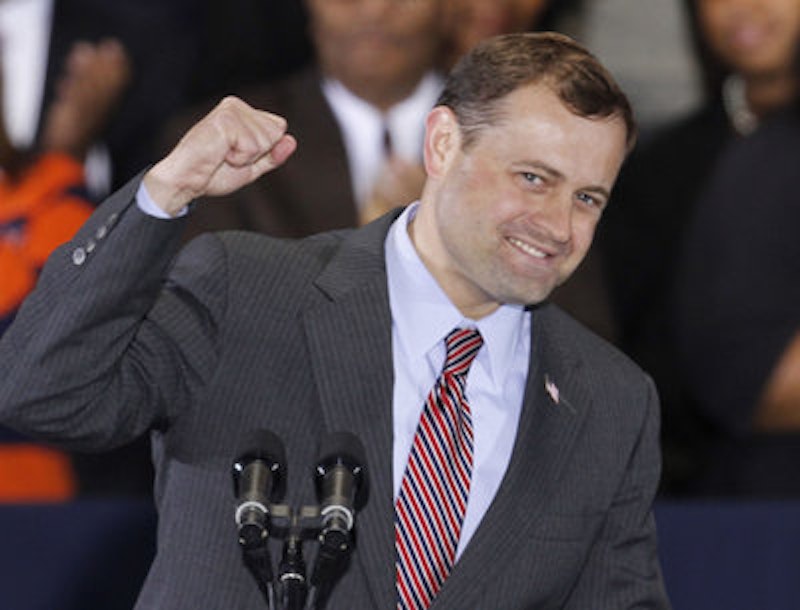 The June 13 Democratic primary for the Virginia gubernatorial nomination became more interesting when former 5th district congressman, Tom Perriello, resigned his State Department position to make an unanticipated entry into the contest in early January. Current governor Terry McAuliffe’s chosen successor, Virginia Lt. Governor Ralph Northam, expected a smooth glide to the nomination, but now the establishment wing of the Democratic Party of Virginia is having conniptions. It reminds me of the reception the party gave Bernie Sanders not long ago.

Northam also has the support of Virginia’s Democratic senators, Mark Warner and Tim Kaine. The physician from Onancock, Virginia would normally be a lock for the nomination, but Trump’s election has created a sense of urgency among many voters. This is no ordinary election. Virginia's gubernatorial contest, along with New Jersey, always the first major race after the presidential election, has historically been viewed as a referendum on the new president's popularity.

Yale-trained attorney Perriello decided that Northam is too low-key and milquetoast for a party forced go on the offensive by the Trump victory. His cheekiness has prompted outrage among the many Virginia Democrats who long ago lined up for the Lt. Governor. In fact, everything about the upstart’s candidacy has infuriated them, an indication of their fear level.

Perriello believes, as do many in Virginia, that if you scratch Northam’s skin, you'll find a Republican. He knows that his adversary's two votes for George W. Bush is a cut over the eye he can keep jabbing. Still, the native of Ivy, Virginia (just outside Charlottesville), has his own political crosses to bear. He's been endorsed in the past by both the NRA and VFW, and opposed the public funding of abortion under Obamacare.

“First and foremost, I'm a populist,” Perriello declared. His populism, however, isn't the empty, race-tinged demagoguery that's Trump’s default. He’s as comfortable with policy as exhortations to the masses, and is conversant with the lingo of social justice that's so prevalent within the anti-Trump movement. Perriello participated in the Women's March and speaks of intersectionality on the campaign trail. Sanders has endorsed him and has already appeared at a campaign event with him.

Perriello established his populist bona fides while driving his dented Ford pickup truck around Virginia’s 5th district in 2008 as he successfully campaigned for its House of Representatives seat. His margin of victory was thin—727 votes—and it wouldn't hold when he ran again in 2010 without Obama alongside him on the ballot, but his defeat of six-term Republican incumbent Virgil Goode was considered a stunning upset in that conservative district. I was living in heavily Democratic Charlottesville at the time, and remember the jubilation over the local boy winning a district that Obama had failed to carry.

There's an air of mystery surrounding this candidate—an ascetic, ethereal quality. Perriello resembles the young Jerry Brown, current California governor, in a number of ways, including his wonkishness. He told George Packer, who interviewed him for a profile in The New Yorker in 2010, that before he ran for Congress he'd been a national-security consultant, a social-justice activist, and a public entrepreneur. He spent two years in Sierra Leone, advising the tribunal prosecuting war crimes. After his loss in 2010, Perriello went to work for the liberal public policy think tank, Center for American Progress. He subsequently joined the State Department, which sent him to Africa to negotiate peace in the Democratic Republic of Congo.

Ralph Northam’s paid his dues and has the stature to dispatch any conventional Democratic rival, but Perriello presents a singular challenge. The populist is a better campaigner who’s able to connect directly with people and explain precisely how he plans to make their lives better. The former U.S. Army physician, on the other hand, dutifully runs through the Democrats’ talking points on Medicaid and fighting the opioid epidemic when addressing rural crowds, but he's stiff and they've already heard it.

Voter turnout's low in June primaries, but the activists who show up fit the Perriello voter profile. The results will serve as a national bellwether of the type of Democrat voters prefer in the Trump era. Perriello's an economic populist who supports green energy and the jobs that accompany it. Friend to the small entrepreneur and foe of the big banks, he has the authentic populist voice Obama never achieved. On June 13, the Democrats will see how strong his message is.