Mitt Romney is running against Democrats, Republicans and himself. 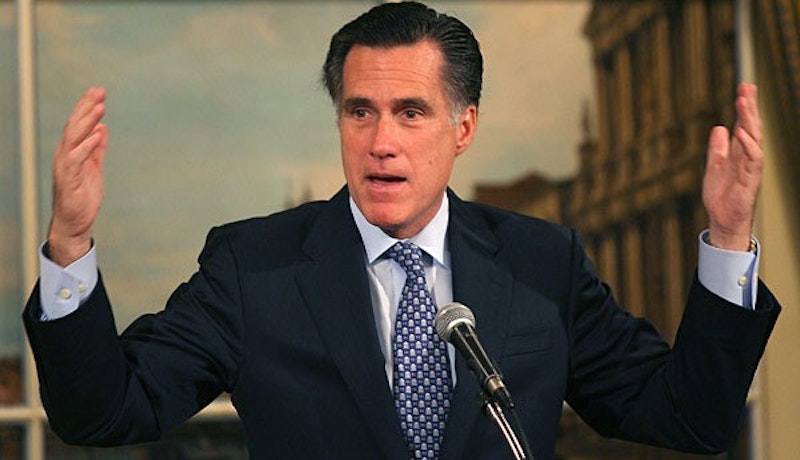 Mitt Romney has three presidential election opponents: Barack Obama, the Republican Party and himself. It’s an open question as to which is the most destructive force, the competing sub-groups within the GOP or Romney’s record as a moderate governor of Massachusetts whose actions conflict with his robber-baron success as a free-market venture capitalist. As for the degree of toughness of Obama, that depends not on the man himself but on the evolving circumstances of his presidency, i.e., the economy and jobs.

As the campaign for the GOP nomination for president has shifted to South Carolina (and Florida) from Romney’s wins in Iowa and New Hampshire, the Republican Party began to reveal deep fissures and doubts about Romney’s candidacy, although very few question that he’ll be the nominee. Romney’s one-note campaign has been his “electability” in November. But the GOP’s imploding around him and damaging that long-range prospect.

In fact, a win in South Carolina on Jan. 21 could wrap up the prize that eluded Romney four years ago. Republicans in South Carolina wear three distinct and separate chevrons—conservative, Tea Party and evangelical Christians. And rarely do the three intersect. South Carolina is also plagued by high unemployment caused by shutdowns of its many textile mills and manufacturing plants. (Florida could be equally problematic because it has one of the highest home foreclosure rates in the nation.) South Carolina also has a strong military presence. The character of the state’s politics is just plain down and dirty. This is the political preserve of Lee Atwater, who didn’t invent scorched-earth politics but raised it to a practicing art form.

On the ground, Gov. Nikki Haley (R) has endorsed Romney, but the Tea Party—which may or may not speak with a collective voice—is angry with Haley for reneging on her small-government pledge and refuses to support Romney. Moreover, the founder of the Tea Party Nation, Judson Phillips, has said the organization will not support Romney because he’s not a true small-government conservative candidate as his record in Massachusetts demonstrates. Evangelical Christians are suspicious of Romney’s Mormonism, which they view as a “cult” and are likely to veer to another candidate. His pro-choice record in Massachusetts doesn’t help, either. Sen. Jim DeMint (R-SC), a Tea Party favorite, has defended Romney but has not endorsed him.

On the air, the campaign against Romney is a calculated attempt to portray him as a Gordon Gekko rich guy who became a multi-millionaire by destroying the jobs of low-income workers with wrecking-crew capitalism. Romney was the head of Bain Capital, a private equity firm. Other GOP candidates—Newt Gingrich, Rick Perry and Ron Paul—are bombarding the state with millions of dollars in Super PAC attack ads undermining Romney and performing Obama’s general election work for him, much to the delight of Democrats and the disgust of Republicans. Romney’s problem with attack ads is that they work. The opening created by Republicans has allowed the Obama campaign to define Romney before he can explain himself. And the attacks have linked Romney to the corporate raiders of Wall Street and have intensified a public discussion of capitalism and inequality that Romney and the GOP can ill afford in an election year.

Perry has described Romney’s business practices as “vulture capitalism.” Gingrich has called Romney’s defense of his business “pious baloney” and the election a competition between “populism” and “elites.” The attacks on Romney and his business practices have put the Republicans in an awkward position of campaigning against free enterprise when the party’s primal scream is emphatically free market capitalism. Rick Santorum, however, has urged other candidates to desist in their attacks on Romney. And Paul, a libertarian and isolationist, has urged all other candidates to drop out and let him and Romney fight for the nomination on principle.

There is an indication, however, that the ads attacking Romney are beginning to backfire. Some conservative leaders are urging Romney’s opponents to call off their attacks and Gingrich has indirectly urged his Super PAC to discontinue its ads. In reality, however, Gingrich’s Super PAC is merely doing to Romney in South Carolina what Romney’s Super PAC did to Gingrich in Iowa.

Romney has a connectivity problem. It is Romney’s own words that have often gotten him into trouble. Romney has denied owning four houses, when, in fact, he did, and even acknowledging in the middle of a campaign—in which he tries to humanize himself by wearing jeans and checked shirts—to spending $19 million to expand and improve a vacation home on the California coast. Not that there’s anything wrong with that, unless you’re running for president as a regular guy.

And here’s another Romneyism that’s part of an Obama anti-Romney ad: “Corporations are people, my friends.” That line goes to the heart of the Supreme Court ruling that bestowed personhood on corporations and gave birth to the new Super PACs that allow companies and individuals to contribute unlimited funds anonymously to work on behalf of candidates. And more: “I know what it’s like to worry whether you’re going to get fired; there were a couple of times I wondered whether I was going to get a pink slip.” As every campaign groupie knows, Romney was a child of privilege. His father, George, was a three-time governor of Michigan, a presidential candidate and chairman of American Motors. Romney attended toney private schools and Harvard University. His personal worth is estimated at $250 million, which he earned as a venture capitalist.

Romney has been forced to tack to the right in an effort to appease the Tea Party and evangelical flanks of the GOP. The unanswered question is how much damage is he causing himself in the primary that will become serious baggage in the general election campaign. The Obama campaign is fully prepared to engage Romney as is evidenced by the ads that are already on the air. Romney’s rich-boy persona and his background as a venture capitalist are a perfect foil for Obama’s newly embraced populism and the rallying cry on the streets of the 99 percenters. In fact, while Obama’s job performance numbers remain in the mid-to-high 40s, his likeability quotient is in the upper 70s. And ultimately it’s likeability—and connectivity—that win elections. And to Obama’s favor, the economy seems to be slowly but steadily improving. Month by month more jobs are being added to the economy, unemployment claims are slowly receding and manufacturing is making a comeback in the United States (334,000 new manufacturing jobs have been added to the economy in the past two years.)

Romney has an explanation for that, too: “This is such a mistake for our party and for our nation. This country already has a leader who divides us with the bitter politics of envy. We must offer an alternative vision.”  Except in this case, Romney was talking about the other Republican candidates’ attacks on him.