Mitt Romney, the room just stood up and it wasn't for you. 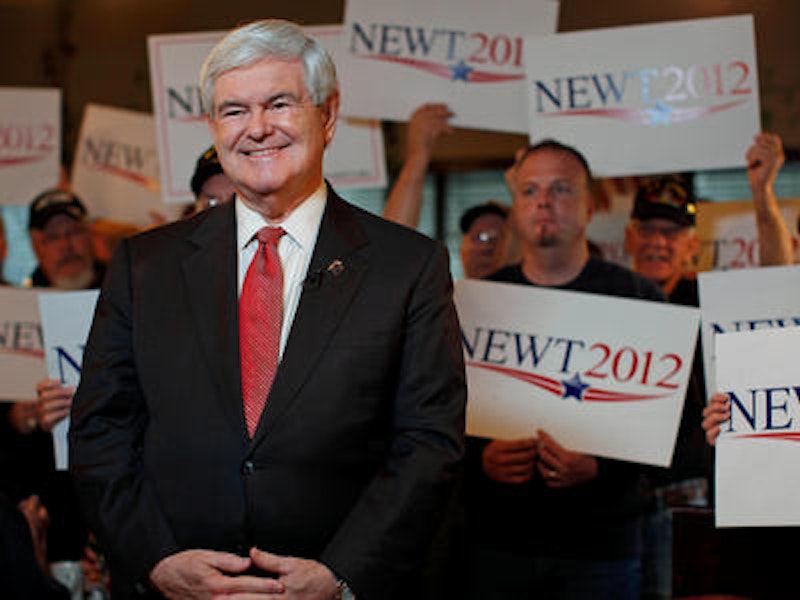 If you like myth and drama, Mitt Romney has ruled himself out of the race. No one can cringe and sputter in front of people (for example, Romney wincing out his famous “Maybe” about releasing his taxes) and then expect them to think he’s their leader. Certainly not if the people are Republicans. The South Carolina morality play enacted a primal conservative drama, that of the unbending excellence of the resolute versus the dickless fumbling of the counterfeit. Mitt Romney made himself look like Jimmy Carter. Newt Gingrich made himself look like Churchill, if Churchill’s big problem had been John King.

Conservatives do love myth and drama, and they do think John King is the enemy. So, for an outsider, it’s hard to think the Republicans will choose Romney over Gingrich. Romney’s advantage in actually setting up a campaign machine seems like a pile of dead leaves, a slack weight that can be shoved away after enough thrashing about. There’s no life to the Romney campaign, this theory would go. Its machine is there to get people to do something that people don’t naturally want to do: vote for Mitt Romney. In South Carolina, people did what comes naturally and voted for Newt Gingrich, the man who doesn’t embarrass you when you watch the TV screen.

Last Monday, when Gingrich laid into Juan Williams, the young men in the audience stood up and cheered; you heard “Newt!” hanging in the air, the vowel drawn out like “Bruce!” at a Springsteen concert. On Thursday night, when he hammered John King, the whole room stood. Come to think of it, I don’t  know of any other presidential debate ever where that sort of thing has happened. Now twice in one week. It’s a sign of ragged, overexcited times and wingnuts’ drama queen tendencies. But it’s also the sign of a remarkable performer at work. Yes, Romney is terrible, but Newt Gingrich is very, very good.

How bad was it for Romney? The Romney side (campaign and super-PAC) spent about twice as much on ads in South Carolina as the Gingrich side: $4.7 million versus $2.4 million. But Gingrich won 40% of the vote, Romney just 28%. (Rick Santorum won 17%, and Ron Paul 13%.)

Gingrich beat Romney in every age group, in most cases by double digits. He beat Romney among the “very conservative” and “somewhat conservative,” and also (by one point) among the “somewhat liberal.” He beat Romney among women, men, the married, and the unmarried, and in every income group except those making $200,000 plus. That’s all according to CNN’s exit polls. These also found that more than half the voters made up their minds within the last few days before the primary, and almost two-thirds of the voters said the debates were an “important factor” or the “most important” factor in deciding their vote. Newt won these groups too, in each case by dozens of percentage points.

Note that not only did Romney have party endorsements, Rick Santorum had the endorsement of evangelical leaders and other social conservatives gathered together by Gary Bauer, James Dobson, and Tony Perkins. The three were trying to get the Christian right lined up for Santorum before Romney became unstoppable. But the handle fell off the suitcase. Evangelicals in South Carolina voted for Gingrich over Santorum, 44% to 21%. In fact even Romney beat Santorum among evangelicals, though by just one point.

Just to rub things in. A week ago Mitt Romney was undefeated, according to official legend. Now he’s one for three. Not only did he lose South Carolina, one of his two victories was taken away from him. Of course, anybody could tell that an eight-point margin in Iowa wasn’t going to stick around after a recount. But Romney was the sort of frontrunner who didn’t bear much thinking on. To look hard was to decide he wasn’t up to the job, so his backers pretended he had two wins, then had to face the kick in the teeth that came when Iowa’s votes were sorted through again.

Meanwhile, the only sizable victory for any candidate this cycle just went to the man who snarled at Romney a couple weeks back to cut the pious baloney. Gingrich has already done two things that Romney cannot: scored above 39% in nationwide polls of Republicans, and scored above 39% in an actual vote. Gingrich’s run at the top of the polls in November and December was the highest and longest of any Republican contender this cycle. Now he’s won 243,153 votes in South Carolina to Romney’s 97,532 votes in New Hampshire. Add up all the votes they’ve won this year, and Romney only has 12,000 or so more than Gingrich, bought at a much higher dollar average.

The primary Palin didn’t win. I admit that, even after South Carolina, it would still take a miracle for Newt to win the nomination. But it would be the sort of miracle that conservatives love. John McCain’s people tried for a miracle like that in 2008, when they roped in Sarah Palin. Republicans liked the idea so much they spent three years, in steadily declining numbers, trying to pretend it had worked. It’s not like they’ve become any less desperate and unhappy since Palin and Joe the Plumber came on the scene. They’re ready to go up in flames, if “flames” is understood to mean backing a flamboyant loudmouth who hates everyone they hate and for the same reasons.

Newt is that loudmouth. Palin said last week that if she had to vote in the South Carolina primary, she would vote for Gingrich “to keep this thing going.” Not an endorsement, but she and Newt would appear to be on the same side, meaning they’re after the same followers. These are the wingnuts, the people who listen to Rush Limbaugh or Hannity every day and follow favorite righty blogs and Fox. Palin used to talk about diving in with a “nontraditional” campaign, the sort where you tell people you’re running and then live off cameras and Web hits: light on endorsements and organization, heavy on buzz and motivated voters. That’s what Newt is doing right now, and it means his core audience is made up of people who never get too far away from a screen.

The wingnuts live inside the perpetual story created by Republican media, and my guess is they are now flocking to Gingrich. In South Carolina he got just about everybody, but across the country it’s the wingnuts that will be the core of his support. Clever where Palin is stupid, articulate where she’s inept, Newt is giving them the show Palin promised but never delivered. He’s standing up to the liberals and the media, making exalted public hairdos eat dirt for being as repugnant as they are. The very dangerous thing for Romney is that he’s turning into one of these hairdos.

The essence of a liberal, in the wingnut view, is to be weak and pompous. You try to cadge your way past hard questions while everyone looks off in the distance and pretends you’re being high-minded. Close enough to Romney, especially as seen last week. For “high-minded” substitute resolute, but the dynamic is otherwise the same. My guess: Wingnuts are now deciding that Romney is made up of the same material as liberals. It’s not just that he fails to be a conservative. They’re coming to see him as somebody who really should be on the other side. By accident, he was issued pin stripes and a business background, but that just makes him a freak of his kind. Speaking of which …

Newt! Newt Gingrich would have to be world-historical to get as far as he has. He says he is, which is what makes him a joke—not only is he full of himself, he is full of himself in a way that seems cracked and fat-boyish. As dreams go, Newt’s past week could have been thought up by a lonely ham-radio operator living in his mother’s basement. But Newt is living it, and he didn’t get there by accident. Everyone has been waiting for him to blow up. He hasn’t, and he’s been though tougher knocks than a lot of candidates have seen without dying.

It was a miracle to watch him reinflate during last Monday’s debate. He started out with head tilted and his elbows barely edging out from his sides. He was ready to glare and to bite off his sentences, as usual, but at low power. Then it was like his organs kicked in. Gingrich’s chin reared. His hands dropped out where they should be, in front of him and to the sides, palms up. His gaze and voice vaulted out over his hands, and he was connecting. He went from being grumpy and battered to being the room.

This was long before John King decided to ask about Gingrich’s second ex-wife. That episode, on Thursday night, provided Gingrich with a crowning triumph. But you don’t get such a triumph unless you’ve had others along the way. You get those by being very good or better. I’ll admit that Gingrich says very little that’s worth listening to. But he is a superior breed of human when it comes to asserting his ego by means of his mouth. He’s a magician. His talent may seem like an inferior sort of genius to have, in that living to impress people is officially considered an inferior sort of life. But it’s the game most of us spend our time playing, and it’s essential to the political selection process. Gingrich didn’t tell the party to schedule so many debates. That was everybody else’s idea. Everybody wants to see their potential presidents behaving like presidents; that’s how we make our choice, sizing up the dolls’ behavior on the screen.

By “we,” I mean voters in general, but Republicans fill the bill more than most. Conservatives tend to focus on the immediate, and to make it so immediate that it’s tiny; hence, big dramas can be played out in miniature. This week Gingrich has played out the drama of excellence. The right loves superiority, the idea of the excellent outshining the ordinary. Newt is excellent. Most liberals may have a head cold when it comes to appreciating him (“an erratic, overbearing, morally repulsive tub of goo,” says a favorite, Jonathan Chait), but Gingrich delivers the goods like few other public figures today.

Admittedly, the goods are bullshit. “Every person in here has had someone close to them go through painful things,” he said, and … what? How does the frequent shittiness of life get him off the hook for what he did to Marianne? (Compare her in the Nightline interview with the photo they show of her in old days with Newt. Today’s Marianne looks like she died but stopped by for the interview anyway.) But he throws the statement out over his head and everyone salutes. In fact the room gets to its feet and everyone is beating their hands together for the man standing next to Mitt Romney.