The anguish, and lack of anguish, that Ron Paul causes liberals. 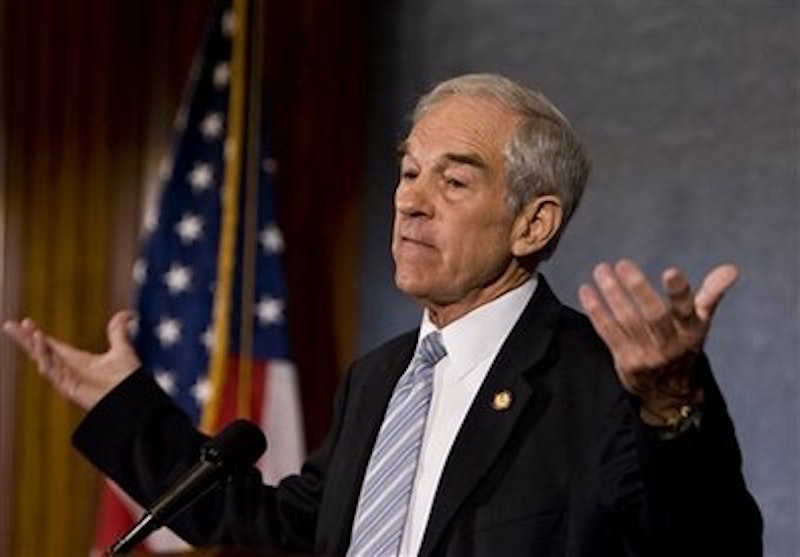 Republicans are deciding right now how much Ron Paul they want in their lives. So are liberals. The blogger Glenn Greenwald wrote about their dilemma here , here, and here. As he sees it, a vote for Obama is a vote for continued repression plus sweeteners: the health care program; government protection of the environment and the rights of minorities and women; government maintenance, pretty much, of entitlement programs. The Paul side comes with the caveat of Ron Paul’s “substantial baggage” and “rancid newsletters.” That’s merely a gesture at the problem, but we know what he means.

Greenwald says nothing, or next to nothing, about the fact that Ron Paul wants free enterprise to run everything. If you think society needs government to function, then you don’t want Ron Paul in charge. If you have any use for him, it’s as a voice, or let us say a mouth. He gets ideas out there (“challenging bipartisan elite consensus,” as Katrina vanden Heuvel put it in a Tweet). To Greenwald, that role matters a lot. The presidential election will take up almost a year, and he figures nothing will be said about civil liberties, the drug war, and interventionism unless there’s a candidate in the race willing to make a fuss about them. The only such candidate is Ron Paul.

Greenwald complains that his Ron Paul leanings have caused him to be swatted around for “privilege” and called a party traitor. He says critics accuse him of wanting Obama to lose when really he just wants issues to be aired. He says critics accuse him of indulging in pampered white-male fretting; women, minorities, workers, etc., need a president who can keep the government on their side, or pretty much on their side, and only some joker in a study would get hung up over preventative detention. For his part, Greenwald wants to know why the people who hated Bush and Cheney back then don’t mind what Obama is doing now.

Greenwald thinks the treason and “white whine” accusations are meant to take the minds of his fellow activists off the psychic pain produced by Paul’s candidacy. He points readers to an essay by the activist Matt Stoller, which says this:

“… while I have my views of Ron Paul, I believe that the anger he inspires comes not from his positions, but from the tensions that modern American liberals bear within their own worldview.”

My translation: There’s something wrong with the heads of American liberals, and Ron Paul is more truth than they can bear.

Well, maybe for some. I bore Paul just fine (pre-blowup of the newsletters). No “anger” and no sense of an internal fault line. Stoller’s names for this fault line are “a long-standing, disturbing, and unacknowledged affinity liberals have with centralized war financing” and the “liberal alliance with the mechanics of mass mobilizing warfare.” I accept that the people yelling at Greenwald may be more disturbed than I am by this factor. But I’m surprised that he and Stoller consider the factor’s existence to be such a surprise. We’ve all heard about World War II and Vietnam, and also the Korean War and America’s entrance into World War I. Democratic presidents come along with wars. Not as much as in the old days, but a good deal over the long run.

This connection is not a fault line for me; it’s a fact of life. No president or government behaves in a way I like. They’re all brutal and heartless to some degree. America’s national-security apparatus is no exception, and neither are America’s leaders. Obama is overstepping (Greenwald’s charges: “Muslim children slaughtered,” privacy eroded,” “whistleblowers threatened”), but Roosevelt rounded up citizens and put them in camps during World War II. I would have been against it, and I would have voted for him. The same for Lincoln (to bring in the Republican who Stoller says began our federal warfare complex, and who threw political elements he didn’t like into jail).

Greenwald gets especially mad at Doug J., a member of the liberal blog Balloon Juice. Doug J. announces that, for his part, he is “primarily interested in the well-being of the American middle-class and in providing opportunity for everyone in the United States.”  He allows that “if you’re a liberal who is primarily interested in civil liberties and a less bellicose foreign policy, then you might be conflicted about Paul.” But he doesn’t shop in that aisle, so mainly he thinks Paul is a racist (“racist asshole,” actually). My point of view is a bit different but still enough to make Greenwald mad; no, if he heard it, I think he would probably cry.

I cared about the Bush-Cheney abuses to the same degree and at about the same remove as I cared about Ron Paul as tribune. In the first case, my feelings were negative, in the second they were positive. In either case they served to sop up guilt feelings about my lack of motivation for getting to the bottom of such important issues as civilian deaths and abridged civil liberties. With Paul, especially, my attitude was like the impulse that makes you give $5 to the worthy cause when they call you at dinner. No, you raise it to $10—there.

Now I have to take my $10 back; my conscience is going to be unsalved. And in the end, of course, I know I’ll vote for Obama. Even if he is overstepping as badly as Greenwald says, I am ready to make that bargain. I think I would be even if I weren’t a Democrat. Obama wants us to have a government that works (I reference domestic policy at this point, nothing else), and that has become a dividing issue for the parties. I’m willing to put up with the rest for that reason. Government is the price of civilization, and no one ever said civilization was pretty. Or if they did, they were fooling themselves. You just need it because everything else is so bad.