Rick Perry Is No Strategic Genius

And we'd all be better off if he just went away. 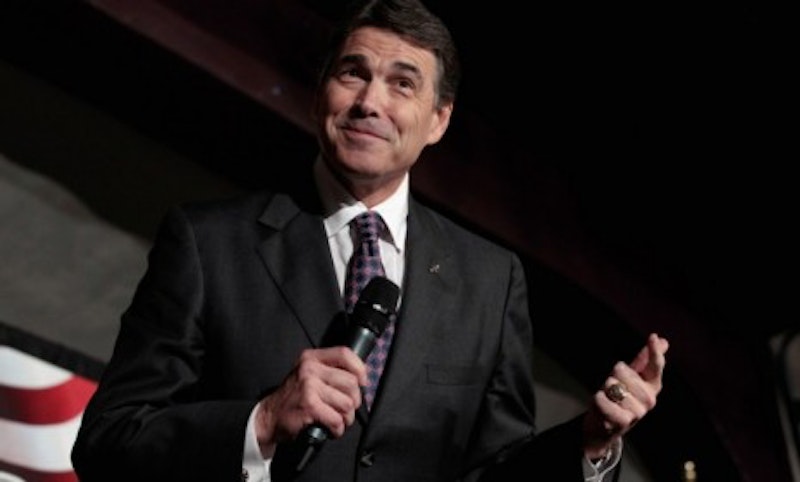 Rick Perry, the Great Anti-Romney Hope back before everybody else got their chance at being the Great Anti-Romney Hope, received slightly more votes in the Iowa Caucus than the rotting corpse of Nikita Khrushchev. He then soldiered on to New Hampshire, where he soundly defeated Michele Bachmann and Herman Cain thanks in part to the fact that both of them had already dropped out of the race. Unconfirmed reports suggest that, in South Carolina, he is having trouble finding babies to piddle on his tie.

Perry's from Texas, but even a Longhorn-sized glutton has to tire of such heaping helpings of humiliation at some point. Indeed, there was half-minute there after Iowa where Perry seemed ready to accept the obvious and slink back to Austin. But then he changed what he laughingly refers to as his mind, and decided to stay in until at least South Carolina, which is, his advisers have informed him, in the South.

Perry's counterintuitive refusal to go away has led to a bunch of pundit cogitating. Nate Silver, at 538 wonders whether Perry's decision is emotional or strategic, and concludes that it may be a sign that big donors and the Republican establishment still aren't happy with Mitt. Jonathan Bernstein agrees, though he still thinks Perry's chances are slim—which seems like a safe prediction. Matt Glassman takes what he calls a "wider view," arguing that candidates are actuated by complicated and conflicting motives, many of which are simply not known to the public.

And so virtually all campaign decisions, from the macro (whether and when to drop out) to the most micro (how hard to attack the frontrunner during the foreign policy portion of the debate) are colored, at least in part, by goals that are not only unrelated to winning the nomination, but also are not known to the public. Which, in turn, makes it supremely difficult to judge the tactical choices being made by the candidates. Even when potential alternative goals are known, there’s no way to judge how candidates weigh them against each other. […]

And none of this is mutually exclusive. It’s not hard to imagine someone like Perry coming out of Iowa thinking well, it’s really long odds now, but that’s better than nothing, and definitely better than the embarrassment of dropping out. And besides, if I stay in at least I might be able to prevent that pompous Gingrich from winning South Carolina. And that wouldn’t be the worst chit to have in my pocket during the Romney administration, especially if I can influence his immigration policies. In my personal experience, this sort of political thinking is more common than most observers think. Candidates at all levels of politics can be romantics about their chances of winning far past the point of any viability; anyone who gets this far almost certainly feels like fate is on their side. But most candidates can also credit their success to harnessing opportunities and salvaging victories even in defeat. And all of this serves to remind us how complicated political strategy can be, and how little we can sometimes say absent a full understanding.
Silver, Glassman, and Bernstein all seem like smart guy, which is precisely why I find their analysis unconvincing. Because looking deep into the brain of Rick Perry to determine his strategic calculus overlooks the one overriding thing that this campaign has taught us about that brain: it’s stuffed with soggy cardboard and wrapped in fog. The glorious "oops" moment from the debate where Perry forgot his own talking points has been reinforced by a series of gaffes, blunders, and bloopers. Perry is not ready for prime time—he's not ready for any time. He makes George W. look like William F. Buckley Jr. and Reagan like Solomon. He is not at all bright.

Given that, parsing his motives and figuring his angles may be missing the point. Maybe it's not about "complicated political strategy." Maybe it's not about what we know and what we don't. Maybe, instead, Perry's is just like a particularly thick-skulled cow that has received a massive blow to the head, but is so slow-witted that the rest of the body hasn't received the message that it's been knocked unconscious.

Perry's an extreme case, obviously, but I don't think he's unique. Pundits tend to assume that politicians, or at least their advisers, are possessed of a realpolitick cunning. But what if, just theoretically, the candidates who seek the honor of the presidency are, on the whole, not all that smart? Perhaps our beloved candidates are just, at heart, gaseous bags of rhetoric, trundled hither and thither not by strategic concerns, but simply by great gusts of ego.