Obama’s an ineffective bureaucrat, but he’s preferable to an unprincipled cipher. 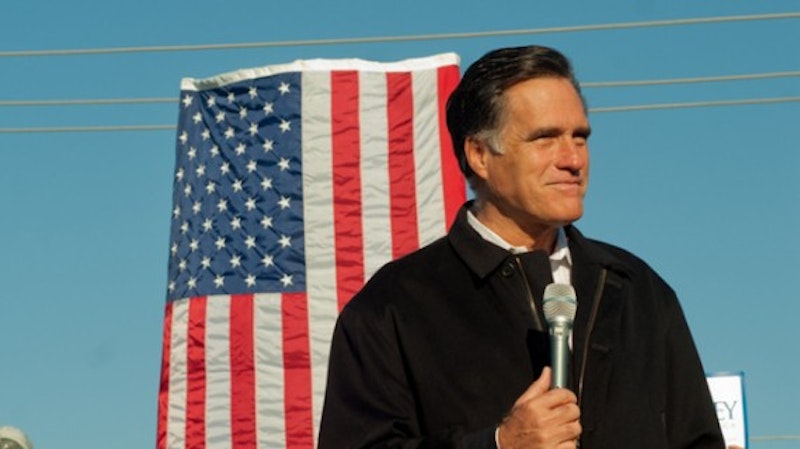 Mitt Romney’s picture is stunning: crisp smile like fresh lettuce, perpetually graying temples for wisdom, and broad, presidential soldiers. But after five years of earnest campaigning, Romney has made it clear he’s comprised mostly of stale air. The man is a constant and reliable source of disappointment among Republicans. The Big Mac they’re being forced to eat looks nothing like the picture and the only thing left is cooked rat. He’s a blatant faker and everyone knows it, but he’s reliably mediocre and safe, like McNuggets.

Romney is his own worst enemy. He exposes his seams when he’s vaulting, trying so hard and doing so little to woo the hard right, the hawks, and the Tea Partiers he knows nothing about. When asked about jobs on Saturday’s ABC debate, the former governor limped into a cartoonish dismissal of government as “always getting in the way of job creation,” as if the government were a gigantic Acme-style monolith that’s easier to destroy than navigate. Mitt thinks he’s telling the knuckleheads what they want to hear, but his pants have got no back. He’s a coward of no volition or inspiration, intent not on doing great things but just looking the part. Daddy told him to be president and that was that.

Any person with their brain turned on knows that there are three things America must do immediately to set up longtime recovery and prosperity. First, we’ve got to update and add to our infrastructure. Our trains, rails, and highways are falling apart while we continue to hemorrhage money in Afghanistan and on our military. Cut the defense budget even more than Obama did recently and put all that money into adding high-speed rail, bullet trains, and useable public transportation in more large cities. Romney would leave it to the private sector, which means lower wages and shoddier work.

Second, we need to promote and encourage domestic manufacturing. Our economy sucks because we don’t make any of our own stuff. Millions of Americans are sitting on their butts right now, either doing zilch or hours and hours of busy work in cubicle farms. Many Americans feel manufacturing jobs and assembly line work are beneath them, and leave it to business minded-moderates to enable peoples’ entitled laziness. It may be cheaper and more frugal to build in China, but we’re shooting ourselves in the foot long term. The more we build and sell here, the richer we all get.

Third, we need to break up the media monopolies. Six major corporations control almost everything we see and hear. This kind of consolidated power is so dangerous because people are easily tricked into believing they’re informed and watching unmassaged coverage. There’s a reason every major outlet last fall dismissed Ron Paul out of hand (and still do) while sucking at Herman Cain’s teat: the latter is a goof, an amusing side story and distraction, while the other’s policies would dismantle and restructure the world that Viacom, News Corp, Disney, Time Warner, Comcast/GE, and CBS thrive in and need to survive. It’s a world of easy comfort without responsibility; the ignorance is bliss luxury suite. This means our mainstream is harder to infiltrate and manipulate without sanction than ever, and with so many horribly toxic and ignorant elements still at play in our culture under and above the surface, we need someone who will stop the business as usual. Obviously Romney is not the guy, and we’ve seen that Obama isn’t either. But at least compromise is not anathema to the Democrats’ spirit. Jon Huntsman had a great retort when Romney went after him for praising Obama’s leadership: “It’s attitudes like that that make our country so divided.” A rare moment of clarity in a miasma of dense, dense stupidity.

We have a choice between a silver-spoon square with no convictions and a principled, ineffective bureaucrat. They’ll argue in circles about healthcare while our roads crumble and the people get angrier and angrier and angrier, losing hope and reason every day. But when they come with their pitchforks, they won’t go for the bureaucrat—they want the blood of the obfuscator, the one who lies so blatantly through his teeth and takes their money fists at a time. That’s who Romney will be in the general election: the tycoon making his last, selfish stand.