Sarah Palin and how we love our sacred violence. 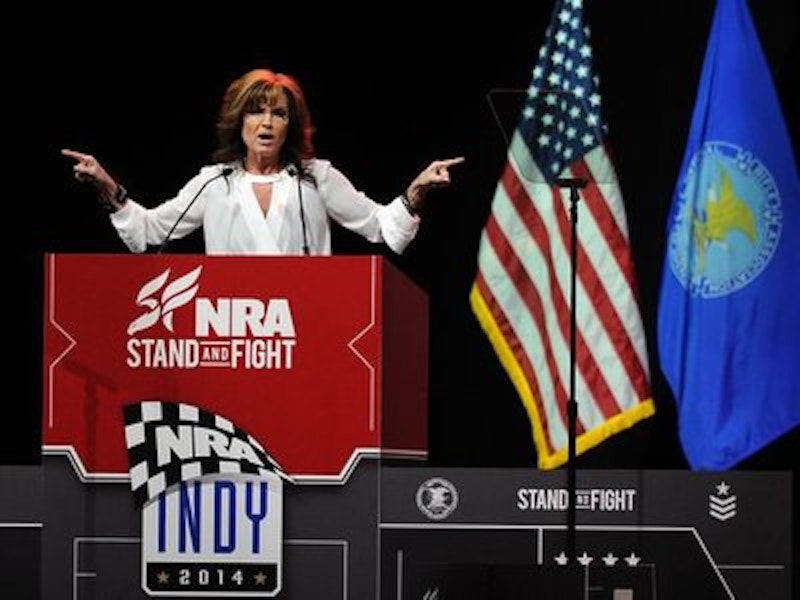 In Frank Miller's influential 1986 series The Dark Knight Returns, Batman drags an unconscious perpetrator up to a rooftop, and hangs him upside down with his eyes covered. When the bad guy wakes up, Batman begins to question him, and then uncovers the guy's eyes. Hundreds of feet above the city, the bad guy starts to scream in terror, prompting our hero to ruminate smugly about how much fun he's having.

Last year, in the film Olympus Has Fallen, the American agent played by Gerard Butler stabbed a North Korean bad guy in the knee to get him to talk. The audience at the preview I attended cheered enthusiastically.

Last weekend at the annual meeting of the National Rifle Association, Sarah Palin declared to an enthusiastic audience that the current administration is too nice to jihadists. "Well, if I were in charge," she said, "they would know that waterboarding is how we baptize terrorists.”

Conor Friedersdorf at the Atlantic argued that Palin's enthusiastic embrace of torture is ominous, since it suggests that a significant proportion of the conservative base still approves of it, and that the Republican Party would reinstitute it if they win the White House. I don't disagree with that assessment. But I think it's worth realizing, too, that torture as a policy resonates well beyond the Republican base post-9/11. On the contrary, Palin's rhetoric is broadly in line with a long history of justified violence as entertainment within American culture. In the 1987 film Dragnet, the detectives interrogate a captured felon by smashing his balls in a drawer. Torture, pop culture says, is effective, fun, and even funny.

So why is torture so appealing, not just to conservative NRA members, but to comic-book readers, filmgoers, and entertainment consumers of all stripes? You could say that it's just because people like violence, but I think it's a little more complicated. People don't just like violence. They view violence as an ultimate expression of goodness. When Batman in Frank Miller's Dark Knight Returns tells a perp, Dirty Harry style:

You've got rights, lots of rights. Sometimes I count them just to make me feel crazy... But right now you've got a piece of glass shoved in a major artery in your arm, right now you're bleeding to death. Right now I'm the only one person in the world who can get you to a hospital in time!

…that's a moral statement. Coddling criminals (or, in Palin's version, terrorists) is wrong; weakness equates with evil. Force and strength aren't just a means to goodness; they embody goodness. Violence is an ethical experience.

Superheroes, so popular on film since 9/11, aren't different necessarily from other action plots, but they do demonstrate the link between the good and the powerful with special clarity. The famous Stan Lee/Steve Ditko Spider-Man line, "With great power comes great responsibility," nicely captures the ethos. Those who have more power have greater moral responsibilities, and, inevitably, greater moral possibilities. The strength of the strong makes them more capable of morality. Steve Rogers, in Captain America, may want to do good and have the desire to do good, but he can only become an icon of goodness after he takes the super-soldier formula and becomes powerful. Superman may be good, but we want to see stories about him because he's super-good—because his limitless power makes him able to spread goodness far and wide. One DC comics alternate universe title The Nail from 1998 cleverly imagined what would have happened if Superman had been adopted by an Amish family rather than the Kents. The conclusion was, raised to be nonviolent, he would have been neutralized, irrelevant. The goodness of the man depended on the superpowers, which meant that, without violence, there was no good.

The equation of violence and goodness, the touting of force as a good in itself, is broadly fascist. But it's not just fascist—or, at least, looking at the entertainment we consume, there's plenty of evidence that the tendency to see righteous violence as a bedrock ethical experience is shared by a broad range of people. It’s central to America's self-image as a superpower, and to the rationale for force deployment around the globe. Was the greatest generation great because of innate moral sweetness, or because they were involved in violence? Does the morality underwrite the violence, or does the violence validate the morality? How can you tell the difference?

In theory, Nietzsche's superman was supposed to be an alternative, or replacement, for the tortured hero who died on the cross. In practice, though, Christians like Palin tend to like power just as much as the rest of us do. When Palin presents waterboarding as a sacrament, she's speaking with unusual clarity and insight. Torture, as a quintessential experience of power, is a way in which Americans, Christians, and pop culture consumers experience the good. If you look around at the stories we tell and the way we behave, torture does encapsulate our deepest beliefs about what goodness is and how it is implemented. Palin summarizes our moral certainty that good is not good unless it is strong enough to hurt somebody.