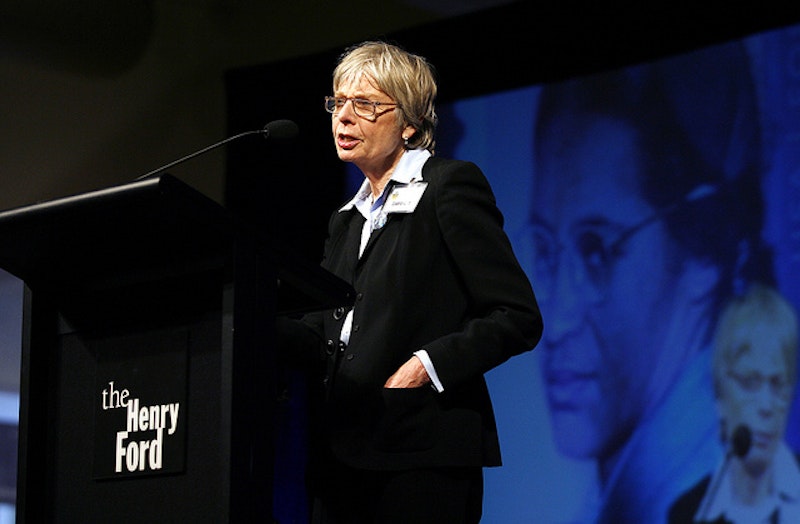 I don’t read The Daily Beast often enough to know if they’ve followed the lead of The New York Times and The Atlantic, and now publish “native” advertising. Probably, and if so, it wouldn’t raise an eyebrow: websites (and newspapers) can’t be blamed for chasing dollars drizzling from the sky. But pardon me for believing that such “advertorials” ought to be labeled as such.

That wasn’t the case with Eleanor Clift’s May 1 fawning profile of Mary Burke, the 55-year-old multimillionaire who’s challenging Wisconsin incumbent Gov. Scott Walker in this fall’s election. Clift, a 73-year-old advocate of all men and women Democratic, had a long career at Newsweek, is a frequent cable TV guest, and her most notable achievement (such as it is) was the schoolgirl crush she had for Bill Clinton in the 1992 presidential election. She remained a steadfast supporter of both Bill and Hillary, oblivious to the self-induced embarrassment.

Clift, who doesn’t bother to get a comment from Walker, or even his campaign staff, for her article, lets Burke do most of the talking, while citing unattributed polls that show—in May—a close race. Burke is well-educated (Georgetown and Harvard) and had a successful career as an executive at her father’s Trek Bicycle Corporation before running (with the help of $128,00 of her own money) for Madison’s school board. Clift writes that Burke “is a political novice, and in a polarized electorate, that might be a winning formula.” I have my doubts, since Scott Walker is a tenacious campaigner, who feeds on the antagonism showered on him for his conservative, anti-union views. He’s 46, a college dropout, and has national political aspirations.

“I think I just work hard,” she says, dismissing her brother’s estimation of her [the family’s] as the brainy one. “I wasn’t one of those people who got good grades without doing anything. I was always a worker.” Asked what her campaign is about, she says, “It’s jobs, it’s women—I come at that not only as a business executive. I’m a problem solver. Where do you want to get to, where are you now. Let’s get all the options out on the table, and let’s choose the best one… [Walker’s] promise to create 250,000 jobs in his first term is well out of reach, and Burke says of his job plan, “I’ve seen eight-graders’ term papers that are more thoughtful.”

Again, even in a cream puff profile of a political candidate, most reporters—at least in the past—give the courtesy of allowing the attacked competitor to respond, if only for a sentence or two. But that’s not in Clift’s ethical handbook: she advocates and puffs and promotes any Democratic candidate, especially women, who strike her fancy. I defer to political analysts who earn their living handicapping elections, such as Virginia’s well-respected Larry Sabato, who at this point labels the Wisconsin governor’s contest as “Leans Republican.”

I’ve no idea whether Clift reads the “progressive” Daily Kos, but if she does, she probably tossed away that website’s opinion of Burke, in which Walker’s challenger was described as “The Mitt Romney of the left.”