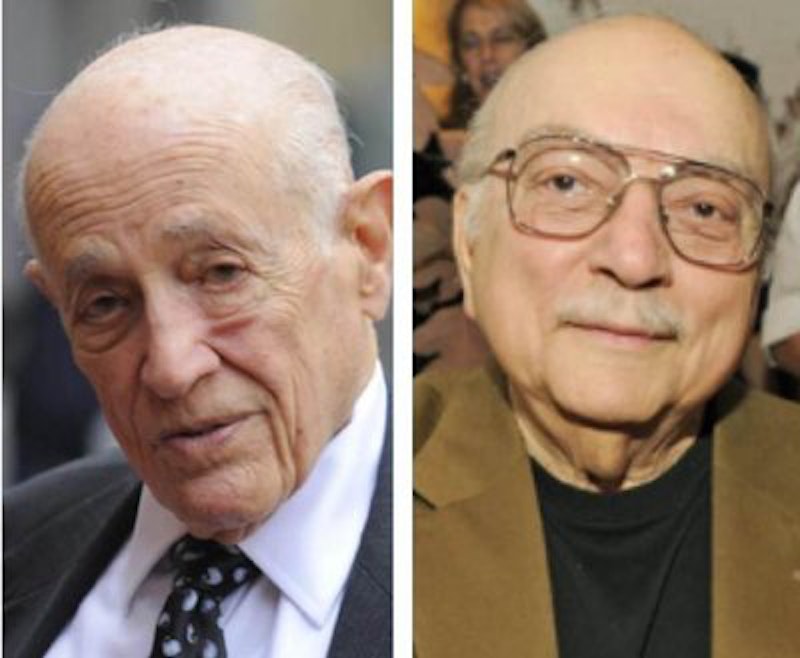 Marvin Mandel, Maryland’s 56th governor, is old now, bald, shuffling as he walks, the eyes all droopy and sleepy, but the mind and the switchblade wit are as sharp and agile as ever and he remains among the shrewdest political analysts in Maryland.

The irreverent and profane John Paterakis, the state’s premier muffin man, is old, too, not quite as old as Mandel, and he scoots around in a motorized chair threatening to smack anyone on the head who cheers him on to live a hundred years. Cent’anni, John.

Together Mandel and Paterakis, friends to the end, celebrated their birthdays with dozens of pals and political knockabouts, Mandel clocking in at number 94 and Paterakis a decade behind at 84, with a sense of pride and accomplishment and a look over their shoulders at the Baltimore skyline, knowing that they built it and people came.

Mandel’s is the story of the Phoenix rising, but that’s a tale for another time. On April 23, (Mandel’s actual birth date is April 19), Mandel was remembered for what he did for Baltimore as governor from 1969-1979—putting into place the building blocks for the down-at-the-heels city’s resuscitation, the World Trade Center, the Convention Center and the Baltimore Metro. They were soon followed close by the C&P headquarters (now the Verizon building) and the Equitable Bank Building (whatever its new name), both of which he was instrumental in encouraging the private investment in the rebounding downtown. And the rest of the bricks and mortar and pavilions followed.

So in a sense, Mandel and Paterakis were accidental partners. Without those civic monuments anchoring the harbor that Mandel built, Paterakis might not have been able to create his thriving city-within-a-city, the gleaming and stylish Harbor East, stretching the waterfront development far beyond James W. Rouse’s aging yogurt stand, Harborplace.

Paterakis assumed control by default of a contaminated chemical dump, sanitized it of its toxins and on its reclaimed earth built towers that sparkle on the horizon and provide Baltimore with one of its liveliest living and entertainment enclaves. Paterakis’ magic continues to push eastward to Fells Point, where a former partner and spin-off company are planning a massive mixed-use development. And several of Paterakis’ H&S Bakery warehouses are being demolished to make way for office buildings.

Funny thing: When William Donald Schaefer, as mayor and governor, used to prod Paterakis to do something, anything, with his contaminated 12-acre parcel, Paterakis would grump: “I’m a baker, not a builder.”

And here’s another ironic factoid that not many people remember: Schaefer originally opposed Harborplace or any redevelopment along the water. The idea for a tourist attraction resembling San Francisco’s Fisherman’s Warf originated with City Comptroller Hyman A. Pressman in the 1960s and was championed by the Greater Baltimore Committee. Schaefer fought the development for years, partly because he ate frequently at Connolly’s seafood shack, which he ultimately had to demolish when, in frustration, he finally gave in to the idea of Harborplace.

But this was a birthday celebration and not a builder’s convention. And Mandel saluted his old friend and co-celebrant by announcing that the highest tribute he could pay Paterakis was to say, “He’s the greatest guy I know.”

For it was Paterakis who came to Mandel’s aid when the former governor was down and out and in trouble with the law. Paterakis was one of three men who formed the blind trust to raise money for Mandel’s legal defense fund. The others were Henry Knott, the builder and philanthropist, and Carson Dowell, of Kelly Springfield, the tire company.

The offices of Nyberg Fletcher & White, in Glen Burnie, were packed with well-wishers—political associates and friends of Mandel and buddies of Paterakis. They expanded their waists on crab cakes, roast beef and pork tenderloin as well as a massive strawberry short cake decorated in red, white and blue with birthday wishes to both Mandel and Paterakis. The party was hosted by Capt. Eric Neilson, of the Maryland Bay Pilots, Mike Stavlas, a restaurateur buddy of Paterakis, and Maurice Wyatt, who was Mandel’s appointments (patronage) secretary.

This was an occasion when the past and present competed for time and attention. Mandel’s daughter, Ellen, flew in from the West Coast for the celebration. Mandel’s son, Paul Dorsey, attended as well. Anne Arundel County Executive Laura Neuman was there as was Former Baltimore County Executive Jim Smith, now state secretary of transportation. Two of Mandel’s former staff lawyers, who went to become Court of Appeals judges, John C. Eldridge and Alan Wilner were there to toast their former boss as were Hans Mayer, Mandel’s former administrative officer, Thom Burden, Mandel’s deputy press secretary and Stanley Fine, another staff lawyer who moved on to head the Maryland State Lottery.

Gene Raynor, the former Election Board chief, was among the guests as were Senate President Thomas V. Mike Miller (D-Calvert), Former Senators Thomas Bromwell and Tommy Broadwater and Nancy Grasmick, the former state school superintendent. And from the Baltimore City Council came its president, Bernard Jack Young, and Rikki Spector. In all, about 75 guests turned out for the festivities and a rear-view look over the four-and-a-half decades since Mandel first assumed the governorship.

Politicians and athletes have a tough time letting go of yesterday. As much as a birthday party, the occasion was about a time and a place when good politicians stayed bought, when million-dollar deals were done on handshakes and winks and nods, when politics was a face-to-face business, when patronage was a system of rewards and punishments and walk-around money was the coin of the realm in Maryland as elsewhere.

The era of Mandel’s governorship also bracketed Watergate, before and after, which is usually considered the line of demarcation between the old way of doing business and the new rules of engagement, especially with the press, for better or worse. Paterakis was a significant part of the action, not only through his campaign contributions but through his friendships, business interests and his direct involvement in the political process, though unelected to anything.

But above all, it was a staid time when there was an accepted code of public behavior that politicians lived by. Mandel has managed to outlive many of his contemporaries and many of his indiscretions and transgressions have evanesced as memories have faded and disappeared. Succeeding generations hardly know who he is let alone thrash over the history of seven governors ago.

And what a lapse it is that the boomers and millennials sip their reinvented cocktails and nosh on tasting menus in Paterakis’ hotels and restaurants, not knowing who laid the groundwork 45 years ago for the waterfront playground built on a toxic bog for which Baltimore is known.

But the legend and the friendships come alive once every year as the party invitation reads: “No Gifts, Just Memories.”

And as the ubiquitous, elbow-grabbing, back-slapping Bruce Bereano remarked many times over during the afternoon as a testament to Mandel’s durability: “I’m starting to plan number 95. You think I’m kidding? It takes about nine months to put it together.”

—Frank A. DeFilippo was Marvin Mandel’s press secretary from 1969-1977