The tentative front-runner has the most to lose. 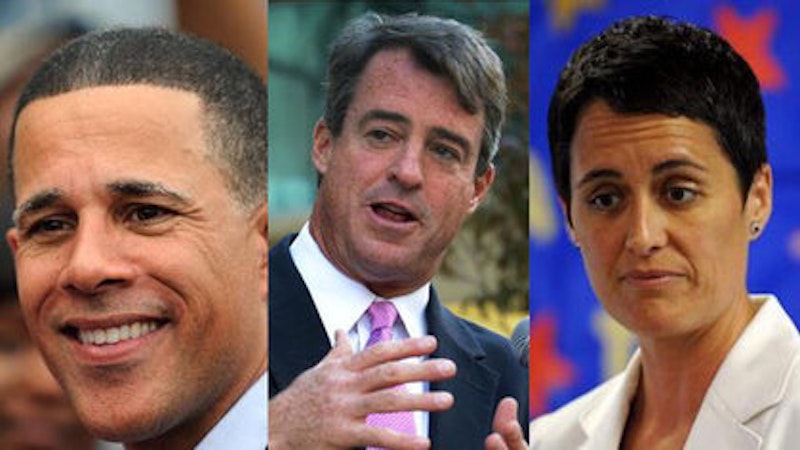 Debates are hard to win but easy to lose. Debates are also either tedious job interviews or the fireworks of democracy, depending on where you stand or where you sit. Nonetheless, debates (and television) have come a long way since the very first one in 1960 when a sweaty upper lip and two Chinese islands nobody remembers were the difference between winning and losing.

So here’s the deal: when Maryland’s Democratic candidates for governor—Lt. Gov. Anthony Brown, Atty. Gen. Douglas Gansler, and Del. Heather Mizeur (MoCo)—face off this week (May 7), the basic rules of engagement are much the same as we all learned in high school except the stakes are much higher than just a passing grade.

The first televised impression can influence standings in the polls and cash in the bank. It is a rare opportunity to frame the campaign debate and define the opposition. The first debate is crucial this time around because most polls show that 40 percent of the voters are still undecided only seven weeks before the June 24 primary. The debate’s primary assignment and first prize is winning over those persuadables.

Here’s the program that most political rubberneckers expect: Brown’s the frontrunner with the most to lose. He’ll be under attack and defensive, coached (perhaps overly) to play it conservative and not take chances just as he has run his cautious campaign. Gansler will be the aggressor, hammering Brown over the botched and bungled Maryland health insurance exchange, perhaps too combustible an approach for television. And Mizeur, just behind Gansler in the polls, is the only one of the three with firmly held convictions and no axes to grind except to sell her ideas to the 40-percenters.

Yet here we have an ideal set-up: Brown is a Harvard Law graduate and Gansler is Yale undergrad and University of Virginia Law and both had to survive moot court to claim their degrees. So the assumption is that both should be competent, if not skilled, debaters. Mizeur has proven herself to be an effective and convincing communicator before audiences large and small due to the passion of her unshakeable beliefs.

Campaign specialists spend an inordinate amount of time (and money) prepping candidates for debate when all they often accomplish is the dehumanizing of the object of their intentions (n.b. President Barack Obama’s first 2012 debate in Denver.) Candidates are so over-prepared and over-stuffed with information, bullet-points, poll-driven conclusions and prescriptions for winning that they often forget who and what they are. More often than not, what viewers see and hear are regurgitated stump speeches.

Brown, for example, is in the uncomfortable posture of having to advance his own cause while at the same time defending the record of the O’Malley Administration of which he is a key figure and accomplice. (The last lieutenant governor who was caught in a similar whiplash was Kathleen Kennedy Townsend in 2002.) Brown’s debate sparring partner will no doubt deliver the full hell-raising anti-O’Malley screed during practice sessions.

By now the viewing public has caught on that debates are 90 percent stagecraft and 10 percent substance. Histrionics play an important role. The nit-pickers who score these events look—as much as they listen—for style points such as body language, verbal ticks, annoying gestures, condescending expressions, the cut of a suit and the knot in a tie, what the Italians call bella figura—a person who presents him or herself well.

And it should come as no surprise to veteran watchers that debates rarely change many minds unless there’s a major blunder or any other off-putting distraction. Debates, for the most part, merely reinforce how viewers already feel about candidates, just as viewers feel reassured upon seeing commercials for products they already own. Ten minutes after a debate is over, viewers will remember not what candidates said but only how they looked and sounded.

Politics is about connectivity. So the candidate who can relax and smile, romance the camera while at the same time send poison darts his opponents’ way, deliver a zinger with nonchalance as if chatting with a chum, is the one who’ll charm the audience, both in the studio and at home. Look right down the barrel of the camera and not shifty-eyed at opponents, or down at notes or aside at wrist watches. Viewers don’t trust a candidate who can’t look them straight in the eye. Remember, you’re visiting voters in their living rooms and dens.

The fundamental counsel to candidates in a debate format is this: Ignore the question and say what you want to say. Richard M. Nixon was the master of this reverse English: “That’s a great question. But before I answer that, let me say this.”

Another remarkable phenomenon is how voters’ receptors function in different settings. The couple watching a debate in their living room at home will view the event entirely differently than a few buddies having beers in a bar. One is usually an exercise in (hopefully) domestic civility, the other can become a raucous dispute over a debating point, say gun control or same-sex marriage, with the entire bar joining the brawl.

But in this epoch of gizmos and gadgets, the period immediately following a debate is as important as the debate itself. It is the time when the operatives in the spin room attempt to reformulate the debate on Twitter and Facebook, the #hashtag debate. They try to amplify the strong points, correct the weak spots, distort the opposition and fill in the blanks. The after-words resemble a second debate and often have remarkably little recognition to the debate that actually took place in the hall.

Debates are the subject of debate. Conventional wisdom has always held that frontrunners should shun debates because their only function is to give challengers exposure they normally would be denied. This is especially true for outliers such as Mizeur, who has accepted public financing that is no match for her opponents’ privately raised millions. But the public has become so accustomed to debates that the candidate who eschews them might be viewed as a coward, or worse, a person with something to hide or fear—perhaps debates themselves. (Are you listening, Anthony Brown?)

So it comes as no surprise that a last minute squabble has developed among Democrats over how many debates the candidates actually agreed to. The three agree that three was the number. But Gansler and Mizeur insist that the medium was three television debates and Brown’s camp has accepted two TV and one radio debate. And to them, three is the number three, no matter how you parse it.

And therein lies the existential difference. In the 1960 debate between John F. Kennedy and Richard M. Nixon, those who saw the face-off on television were convinced that Kennedy had won and those who heard them square off on radio were persuaded that Nixon won. By the way, the names of those two islands were Quemoy and Matsu. And it was Nixon’s upper lip that was sweaty.