There's No Racism in Michelle Obama's Rescheduled Visit to Topeka

But the media wants you to think there is. 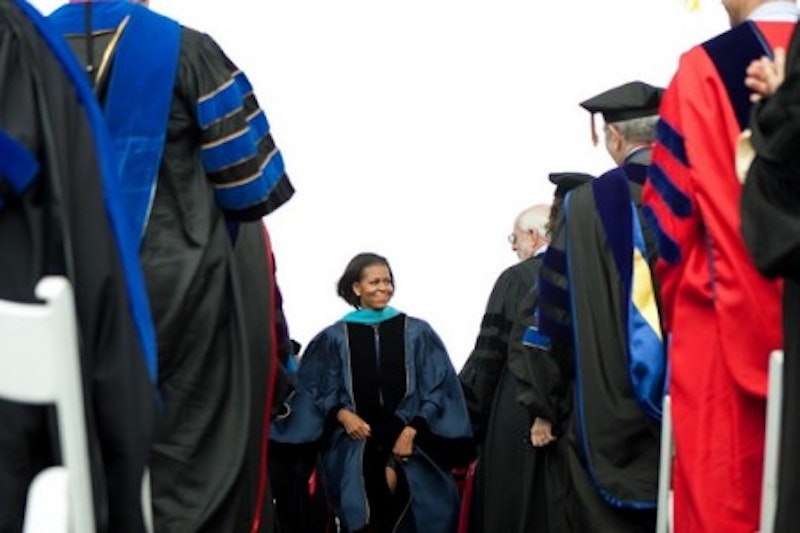 It started off simply. The Topeka Public School District invited Michelle Obama to speak on May 17 in honor of the 60th anniversary of the SCOTUS ruling Brown vs. Board of Education that originated in Topeka. Soon after, a petition was circulated opposing the First Lady’s visit. Immediately, the media blasted residents of Topeka as racists claiming this never would have happened if the First Lady were Republican and white.

This is not the whole story; in fact it’s not even half the story. I did my own research to find out the basic facts of the case. Here’s what I uncovered:

The FLOTUS speech was in honor of the 60th anniversary of Brown vs. Board of Education.

The Topeka School District learned at the last minute (security issues) that FLOTUS could attend.

The Topeka School District made the announcement of the visit without consulting the individual schools.

The FLOTUS visit meant four individual school ceremonies would be scrapped in favor of one big ceremony at an arena that seated 8000 people.

There are approximately 4000 students in grades 9-12 in the school district. (An assumption can be made that roughly one-quarter of them are probably graduating seniors. If this number is close and if each senior has just five guests attending, that's 6000 people in attendance.)

An 18-year-old circulated the petition.

Students and parents expressed concerns that not only would the attendees be limited but that individual school traditions and activities would be ignored at the larger combined ceremony.

The First Lady ultimately rescheduled her visit to the day before the graduation ceremonies.

In interviews, students, parents, and school officials seem pleased that FLOTUS will speak a day early and look forward to her visit.

There have been no race-related comments or quotes by the people of Topeka in any of the interviews I found.

The facts certainly tell a different story. It didn't take long to find this information. Read this article at one of the hometown papers, the Topeka Capital Journal, and tell me if you suspect racism was a factor here. I can't find it. Anywhere. The First Lady did not cancel her visit, she rescheduled. Mrs. Obama, mother of two girls, obviously realized that graduation in rural Topeka high schools is a pretty big deal and wanted the families to enjoy their day. That's it. That's the story.

There’s not one single piece of evidence lending credence to the theory that bigotry had anything to do with this. The evidence is pretty clear that this just a story about some kids and their parents wanting to have an open graduation and invite as many people as they want and keep their annual festivities and traditions. This was about these kids celebrating what is at this moment, the biggest day of their lives with the people closest to them in a way as it has always been done.

The First Lady’s rescheduling allows a win for everyone. She’s able to give her speech and pay tribute to the anniversary of a landmark Supreme Court case that changed Topeka and the nation forever and the high school seniors of Topeka can enjoy their graduation festivities with their families and friends. Everyone seems happy with this, except the media that once again had to make something out of nothing.

The real shame is the targeting of the people in Topeka and labeling them as racist hicks. There's enough real hate going on in the world right now; surely we don't have to manufacture it just to suit a political agenda.