Saira Rao charges $2500 to white women to explain that they're bigoted. 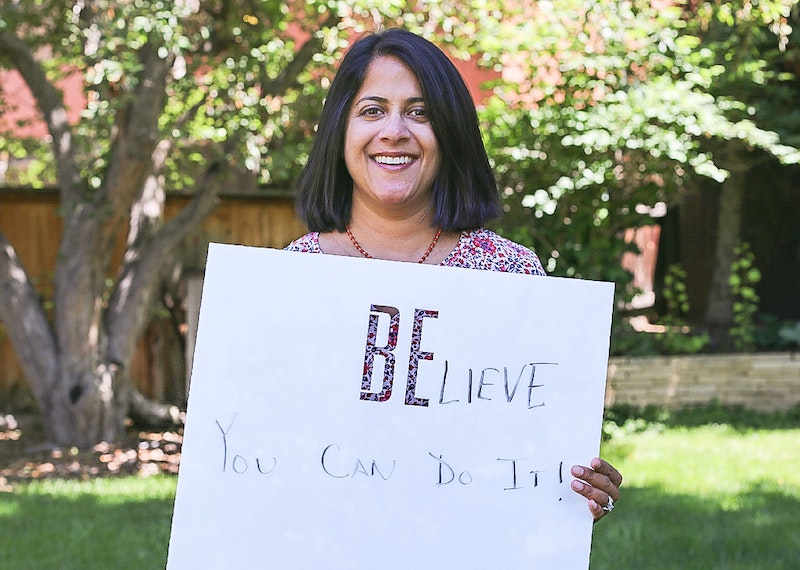 Saira Rao, born in Richmond, Virginia, is unique product of America. Both her parents are doctors born in India. Had they not moved to the U.S., she'd now be living her life comfortably perched atop India's oppressive caste system. Essentially, she'd be the Indian equivalent of intersectionality's worst enemy—the privileged white person. Her identity would erase the barriers many Indians have to navigate, and it's doubtful she'd feel much guilt. In this nation, however, the UVA (undergrad) and NYU Law grad is still privileged, but her brown skin makes her a minority. In her mind, she can't be a Brahmin here, which she resents, so she's become obsessed with white people—all of them.

The first-generation Indian American and failed congressional candidate's Twitter account is devoted to criticizing white people for their many flaws. But don't knock that—there's money in it. She and a black woman, Regina Jackson, have a business—Race to Dinner—that charges liberal white women $2500 for a group dinner, during which they explain to the gathered penitents why they're all racists. At these lucrative struggle sessions, the white women don their hairshirts and are encouraged to share the subconscious racist thoughts they all have. By the time coffee's served, they presumably feel like a Catholic who's just left the confessional booth—absolved, if only temporarily. The harsh reality is that their skin color—their "whiteness"—prevents them from ever being good people on the level of their virtuous trainers.

Rao explains her dinner strategy with the claim, "Wealthy white women have been taught never to leave the dinner table.” She says if they held the sessions, for which they require an advance reading of Robin Diangelo's White Fragility, in a conference room, the women would leave. The implication's that middle-class brown and black women are never taught such a lesson, although that doesn't ring true. Finishing your dinner is a lesson parents of all races and classes teach their children, although most would probably consider Saira Rao's presence at the table an exception to the rule.

There are few things that ring true about Rao, a privileged, wealthy brown person whose husband is a Director with Marathon Capital Holdings, but I give her credit for being a talented scam artist. That wealthy white liberals feel validated by hanging out with and giving money to minority activists was a point Tom Wolfe illustrated back in 1970 with his sensation-causing 25,000-word article for New York Magazine about a party that celebrity conductor-composer Leonard Bernstein and his wife Felicia threw for the Black Panthers at their 13-room Manhattan penthouse. Wolfe scammed his way into the fund-raiser and observed NYC's cultural elite rubbing shoulders with the violence-endorsing black militants with a jaundiced eye, much to the eternal chagrin of the Bernsteins.

The media has reported that pasta carbonara has been served at Race to Dinner guilt parties, but the Bernsteins went well beyond that by offering Roquefort cheese morsels, asparagus tips in mayonnaise dabs, and meatballs petites au Coq Hardi to their intimidating guests, all on silver platters. It was an evening of Radical Chic in which the law-abiding litterati got illicit thrills from hobnobbing with the primitives—these revolutionaries with their proud, wild afros, tight pants and leather coats, and Cuban shades. These weren’t peaceful civil rights negroes in baggy suits, which is where the rush came from.

Bernstein: "Now about your goals? I'm not sure I understand how you’re going to achieve them. I mean what are your tactics?"

Cox: "If business won’t give us full employment, then we must take the means of production and put them in the hands of the people."

But Bernstein didn't dig the way he came off. Wolfe reported that he'd asked Cox if seeing the opulence of his Park Ave. digs made him mad, and Cox saying no. "Well, it makes me mad!" said Bernstein. The Panthers blew an opportunity to ask if they could move in to the duplex to assuage Bernstein's anger. When the heat came, the maestro denied it was even a party. It was a "very serious meeting" involving civil liberties, he protested, but Wolfe had reported too many details to make that claim credible—the white maids serving fancy hors d'oeuvres and the butlers serving drinks.

The Bernsteins were enraged that Wolfe had used his clever prose to humiliate them for their efforts at unity. The Jews and the blacks hadn't been getting along, so somebody had to extend an olive branch and some cash for the Panthers' upcoming trial. Son Jamie Bernstein said his father had entered the party all cranked up from a rehearsal of Fidelio and took over the room, and that his mother never recovered from the Wolfe article. Indeed, few magazine articles have ever had the impact of Wolfe's “Radical Chic: That Party at Lenny’s.” Everybody loves a takedown of the elite, so the story of Bernstein and his liberal buddies wanting to hang out with the Maoist Panthers while maintaining their position at the top of society was riveting.

If only Tom Wolfe was still alive and could penetrate a Race to Dinner sweat-lodge session, but Rao doesn't do men because they're hopeless causes. She knows, as the Panthers knew, that white guilt can be exploited, and she's just as hypocritical as anyone at Bernstein's Radical Chic party. She's discovered how, using intersectionality, a wealthy person can pawn herself off as a victim and convince other wealthy people to pay her reparations. If it costs  $300 per person to dine with her, and thus receive the designation of Good White Women, that must feel like a bargain. Where else do you get atonement at that rate?