The media’s completely unreliable in covering the presidential campaign. 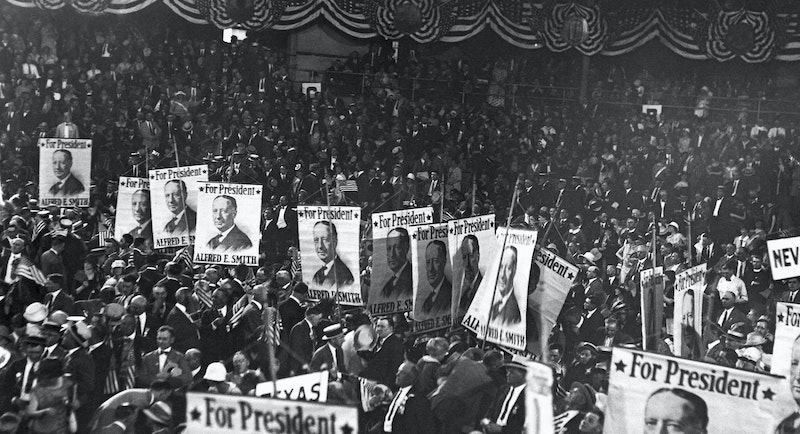 In 1967 my father, adapting to new technology, automated the car wash he owned on Long Island. Gone was the line of 10 men with hoses and towels, replaced by noisy brushes and streams of water drenching the cars that inched forward on a conveyer belt. The overall atmosphere, as I recall as a 13-year-old, was a deafening Whoosh! that drowned out all the joshing and jive—including a couple of my brothers— from the men on the line.

I was reminded of this in the past week reading more than I usually do about the current presidential race. It’s time to tune in, now that votes are being cast—or not, in the case of Iowa—instead of the water-drip torture of polls and the media fools who attempt to interpret them.

I start with The New York Times’ op-ed columnist Michelle Goldberg, whose opening and concluding sentences to a Feb. 7 column summed up her jejune understanding of American politics. First: “Although I’m a pessimist by nature, deep down I think I always believed that the Republic would survive Donald Trump.”

Olympian Big Ideas men and women decry the lack of gravitas in the three branches of government today—with some justification—but generally ignore the decay of leading daily newspapers, in this case the Times.

(By the way, fear not for the shareholders and owners of The Times Company—digital subscriptions are up even as print advertising continues to plunge, and if those investors claim they’re rooting against Trump’s reelection, cover your ears if you’re up to your necks with lies. The Times Co.’s valuation is three times larger than the day Trump humiliated Hillary Clinton, and if a Democrat wins, will surely deflate. On Election Day 2016, a Times share fetched $11.20. On Wednesday morning the price was $38.66, making for a valuation of $6.4 billion).

When the Times had editors, a phrase like “deep down I think I always believed” wouldn’t have survived a red pencil or delete button, but now, anything goes. What does that phrase even mean? Either Goldberg, no kid at 45, believes the Republic will withstand Trump’s presidency or she doesn’t.

Now her conclusion, equally flabbergasting: “The way things are going, the fate of American democracy could soon be Bernie or bust. I envy those who find that exhilarating rather than terrifying.”

Come again? Granted, Goldberg discloses that her husband is a consultant to the reverse Little Big Horn campaign of Elizabeth Warren (the candidate she also prefers), and she may be bitter. After Warren’s drubbing in New Hampshire, does anyone honestly believe she’ll stick it out past South Carolina?

I don’t think Sanders can defeat Trump—too much of the nation, especially once bombarded with a torrent of brutal GOP advertisements in the fall is afraid of a “socialist” president—but after 2016 I really have no clue. Sanders stands a better chance than Pete Buttigieg, a young, robotic gay man who says absolutely nothing in his perfectly-enunciated speeches. (The gay angle, and I’m not sure that husband Chasten Buttigieg—an aside: why would he take that cumbersome last name?— isn’t a beard and that Ponderous Pete is very well-acquainted with female anatomy, to be polite. It’s so Trump era: pretend to be gay to tap an extensive donor base.)

Anyway, is Goldberg saying that the election of Sanders would be as terrifying as another four (eight?) years of Trump? It’s not clear.

A few words about Mitt Romney. All last week Democrats, in and out of the media, creamed in their loose-fit trousers after the failed 2012 GOP presidential candidate and current senator from Utah voted to convict Trump on one charge in the impeachment trial. Courage! Guts! Character! Give me strength. Romney has sparred off and on with Trump since 2015— though that didn’t prevent him from meeting with the latter to discuss a cabinet post—so it wasn’t an enormous surprise. If Romney really were the courageous public servant goo-goos clamor for, he would’ve run against Trump in this year’s GOP primaries. No downside: his Senate seat is safe (elected in 2018) and it would’ve been a no-bullshit coda to a long, flip-floppy career. It’s almost certain he wouldn’t fare well in the primaries—but better than Bill Weld and the moronic Joe Walsh!—but the attention he’d receive would be off the charts, and, from the people Romney cares about, all positive. Instead, he snipes on the sidelines and casts a meaningless vote on impeachment.

There was a lot of palaver about impeachment spectacle last week—for the record, I would’ve preferred the GOP allowed witnesses, from both sides—but count on The Washington Post’s Dana Milbank to take honors for the most sanctimonious baloney. He wrote on Feb. 7: “After chronicling the impeachment proceedings over several months, I’m convinced the most enduring consequence of the depressing spectacle will be American’s loss of decency. [Even Milbank, apparently, knows that quoting Joseph Welch on this matter is overdone.] Long after the details of the Ukraine scandal have faded, after Trump leaves the scene in one year or five, Americans will wrestle with the damage done by blessing the behavior of this vulgar man.”

One, millions of Americans offered no such blessing. Two, not all citizens, regardless of their political views, followed the impeachment hearings and so they won’t have “wrestle with the damage done.” Third, and most importantly, who the fuck is Dana Milbank, a mid-level Beltway pundit, to declare that “decency,” as a result of Trump, has vanished from the United States? In the main, Americans are a fair-minded lot, and “decency” is abundant, whether it’s the volunteers who help the homeless or work at soup kitchens, the money donated to philanthropic causes, the mentoring in workplaces, shielding law-abiding illegal immigrants from voracious authorities and even simple acts like helping the disabled across the street or tipping underpaid staff generously at restaurants.

Finally, leave it to multimillionaire Thomas Friedman—long another New York Times embarrassment—to endorse the odious and enemy of civil liberties Michael Bloomberg for president while trashing Bernie Sanders. Just before disclosing that Bloomberg has donated to his wife’s Planet Word museum, Friedman writes: “In an age when political extremists go all the way, and moderates tend to just go away, Bloomberg has all the right stuff—a moderate progressive with a heart of gold but the toughness of a rattlesnake—for what is going to be an incredibly big, brutal task: making Donald Trump a one-term president.”

Plutocrats endorsing plutocrats: that’ll fire up the Sanders (or Klobuchar) partisans! If the DNC and establishment center-liberals have their way and rig the nomination for Bloomberg, I’d expect a disheartened Democratic base to turn out in low numbers.