Dispatches from the retail politics of New Hampshire in the run-up to this week's primary. 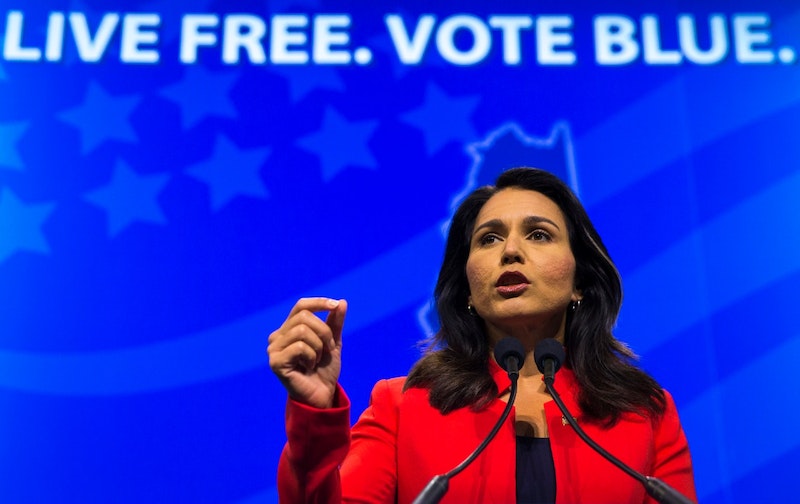 In preparation for the New Hampshire primary, presidential candidates spend several months or, in some cases, more than a year hosting events in the state as they tried to win over voters.

It's a unique opportunity, and something not a lot of other states country have. I live in deep blue Massachusetts, which votes on Super Tuesday, and doesn’t receive the same level of attention.

Intrigued, I made a few treks north to New Hampshire (and Gloucester, Massachusetts) for work to see what goes on up there. Regardless of how one feels about the candidates, the experiences were positive.

The first campaign event I attended was around this time last year to see Rep. Tulsi Gabbard. I also saw her last week at another town hall. The most recent one was in the basement of a Nashua public library. She’s an example where perception and reality don't match. She talks about the failures of the Afghanistan War, favoring an Australian style single-payer “plus” healthcare system, and opposing big tech monopolies. She’s very progressive, but also very likeable and not obsessed with Donald Trump. But she’s called an Assad apologist and a Russian bot.

Before I went to see Gabbard speak last week, I saw Joe Biden unravel in real life. He showed up 50 minutes late, and two people got booted for getting up and yelling about him groping women and children. Divisive? Yes. Entertaining? Definitely. He didn’t call any women “dog face,” any men fat or tell anyone to not vote for him, but the fact that he spent his speech touting his record might explain why his campaign is kaput. It was funny seeing him dunk Bernie Sanders on spending because the national debt doubled under Obama’s watch. Annual deficit spending dropped from recession levels and wasn’t as bad as it is today, but it’s still ironic.

One week prior I was in Gloucester, Massachusetts to see former Massachusetts Gov. and Republican presidential primary challenger Bill Weld at the Beauport Hotel.

This one was a donor event that had about 20 people—and it was open bar! They also had servers walking around handing raw tenderloin as an appetizer. Fancy! Weld seemed like a nice guy. He and I talked for 11 minutes or so at the beginning of the event about education, deficits and race/demographic change, and he gave honest, insightful responses. But in his speech to his donors, he said he doesn’t think America is dumb enough to elect Trump again and compared him to Hitler and Mussolini. Bill Kristol would be proud.

Give credit to Weld for saying what’s on his mind. I wish Joe Walsh did the same. I trekked up to Concord, New Hampshire last week to hear Walsh speak and when I got to the Common Man Restaurant, the people there had no idea what the eight of us were talking about. He never scheduled an event there despite it being on his campaign site. He dropped out the next day. One of Walsh’s campaign staffers assured me that the candidate canceled his event due to inclement weather. The next day, I texted them saying they could’ve just told me he was dropping out instead of lying. I got a text back saying the GOP is a cult.

After the disappointment of not seeing Walsh, I hit the Red Arrow diner in Concord and ate potentially the best cheeseburger of all-time. It’s called the Trump Tower burger and it's a cheeseburger with fried mac and cheese and the buns are grilled cheese. It's absolutely worth $15.25.

After leaving the diner I went to Brentwood New Hampshire to a house party for Colorado Sen. Michael Bennet. The house was 4600 square feet and served what I can only assume are some decent quality wines free of charge. Bennet, who’s since dropped out of the race, is a good neoliberal (wants to expand the child tax credit, reform occupational licensing, reform zoning laws, is generally for free trade, doesn’t mind school choice, etc), so I thought he’d be worth checking out.

He was. I asked him about school choice/charter schools because he used to be the Superintendent and he gave an answer that was more than five minutes long. Some other attendees were just dumb. Two people in a row asked him philosophical questions about democracy. How about something on dual enrollment programs or how expensive it is to become a barber?