The War of Hispanic Secession

A little respect for the Confederacy could help Mexicans, says Todd Seavey. 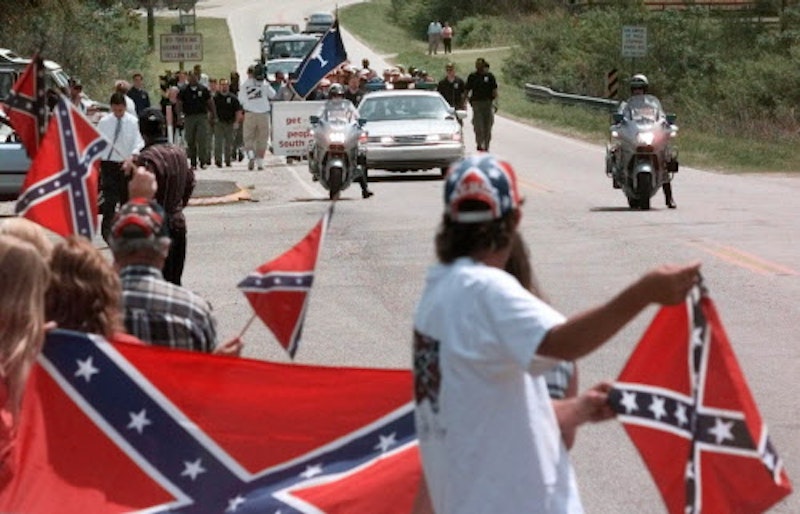 I’m from the Northeast and feel no loyalty to the Confederate Flag, but like many people I was alarmed by the sudden scorch-the-earth attitude opponents of the flag took to all its manifestations. Among the good things it might symbolize in some people’s minds (alongside its obvious bad connotations), after all, is secession. And secession might be the key to solving our Mexican immigration woes and calming Donald Trump.

It strikes me that the kindest and most historically-informed attitude to take toward Mexican immigration is the view that, as the immigrants sometimes say, we didn’t cross the border, the border crossed us. Much of California and the Southwest used to belong to Mexico, after all, so it’s not as if it’s a mystery what all those Hispanics are doing down there. If the modern U.S. weren’t so touchy about the topic of secession, then, we might one day be able to just give it back without too much fuss.

Heck, the news came out, right in the midst of our current immigration squabbling, that Hispanics now outnumber non-Hispanic whites in California, for instance. Why make them keep crossing a border when, at least in theory, the Southwest could fission off, if an overwhelming majority of citizens wanted to, and simply become part of Mexico again?

Then people wouldn’t have to worry quite so much about whether Trump’s crime stats were accurate—and in fairness to him, the violent crime rate specifically for illegal aliens is somewhat worse than the low crime rate for immigrants in general. But hey, if we’re moving in the direction of algorithmic, statistical crime prediction and total surveillance, I assume we’ll have very solid numbers on all that within a few years and know better than ever which prejudices are the accurate ones.

Or we could just get more comfortable with letting people secede and avoid whichever people they don’t like, so that we don’t have to have one big homogeneous national dialogue about, say, who’s worse, the party that coddles drug cartels or the party that admires gambling tycoons.

Unfortunately, many Americans love one-size-fits-all solutions. They gussy up the sentiment in tones of national unity, but it inevitably ends up increasing fear of the out-group or those slow to get with the program, who might sometimes be on the left and sometimes on the right. Can’t risk any dissenters.

And so we get a panicked man in my native Connecticut calling the cops because he saw Confederate Flag merchandise for sale at a flea market. Dukes of Hazzard toys vanish. The chronically-stupid Salon calls for the Confederate Flag to be punished as hate speech. The Memphis city council votes to dig up the corpse of a Confederate officer who was also a Klan founder. I’m not sure what they plan to do with the corpse after that—perhaps behead and burn it to ensure it doesn’t “rise again” as a vampire.

For thoroughness’ sake, though, perhaps we should erase all copies of Joss Whedon’s acclaimed sci-fi TV series Firefly, co-written with libertarian Tim Minear, since its heroes are blatantly likened to Confederate losers after the War, like more than a few cowboy movie antiheroes before them. Joss is progressive, he might not mind.

Meanwhile, a young man in Watertown, MA is arrested just for wearing a belt of fake bullets as part of his punk-rock ensemble. Instead of wasting time trying to figure out whether it was conservative aversion to punks and terrorists that caused this bit of legal overreach or Boston-area leftists’ aversion to guns, maybe everyone should remind themselves that diversity will mean some things you don’t like or that look scary at first glance, and it’s usually not cause for alarm.

If we really can’t get along, though, please remember and show some respect for the fallback option of just breaking away.

—Todd Seavey can be found on Twitter, Blogger, and Facebook, daily on Splice, and soon on bookshelves with the volume Libertarianism for Beginners. He’ll be onstage Sat., July 18, 7pm at the PIT in Manhattan in the “Electoral Dysfunction” political comedy show.