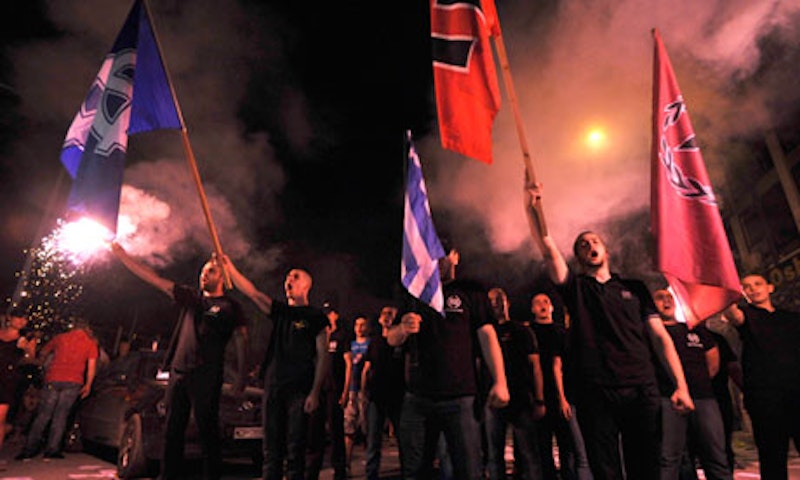 The biggest lie of the 20th century was the pretense that the Communists and Fascists were nothing like each other.

In both Germany and Italy, the fascists arose as dissident factions within socialism. Neither fascist movement lost its belief in the moral superiority of workers to capitalists or gave up on its dream of, as Mussolini put it, “everything within the state, nothing outside the state.”

But after a few years of fistfights between Nazi and Communist street gangs in Berlin, each side was convinced the other was its mirror opposite, as foes tend to believe, and that view of things was often repeated in Stalinist propaganda (after the Non-Aggression Pact collapsed, I mean). That propaganda is still believed by socialism-loving but fascism-hating progressives to this day.

So it must be a little embarrassing when the Greek neo-fascist group Golden Dawn starts sounding almost indistinguishable from Syriza, the leftist party in charge of Greece—and the current darling of the left due to increasingly harsh treatment by the IMF and other international creditors.

I started worrying about Greece back in March after seeing Sarah Leonard, a Nation editor, say on a panel at the New America organization that she was impressed by how radical the organizing of Syriza was becoming and how they were toying with bold new ideas in economic organization akin to syndicalism. Well, good luck with that.

As with so much in Greek philosophy, this newfound syndicalism and seeming indifference to debt has its pluses and minuses. The left-anarchist anthropologist David Graeber, who dreams of a grand Jubilee erasing all the debt in the world, has been cheering Syriza on—and for very different and far more capitalist reasons I don’t think we should live in a world of inter-governmental debt myself.

But Greece didn’t just produce philosophers, it produced warriors. And warriors are not necessarily good with finances.

I can’t imagine that Golden Dawn, which sounds every bit as committed to solidarity, national pride, and political autonomy as its leftist counterparts in the current crisis, is just going to sit around reimagining the nature of commodification if things really hit the fan in Greece and people start getting hungry. I’d imagine they’ll start blaming immigrants and punching people, something like that. That’s what fascists tend to do.

I’m reminded that I saw the cartoonish Greek-warriors movie 300 with an angry Russian woman who admired Putin. After the Greeks were all slaughtered she surprised me by pronouncing it her favorite film of all time, but it makes perfect sense when you think about all those heroic propaganda posters back in her homeland.

There’s a thin line between the warrior ethos, fascism, and socialist solidarity. I’m guessing Syriza supporters, though pissed at Europe just like Golden Dawn members, are striving not to notice that right now.

—Todd Seavey can be found on Twitter, Blogger, and Facebook, daily on Splice, and soon on bookshelves with the volume Libertarianism for Beginners. He’ll be onstage Sat., July 18, 7pm at the PIT in Manhattan in the “Electoral Dysfunction” political comedy show.