Time’s Up for the Talbot Boys

I hoped nothing bad would happen this time. 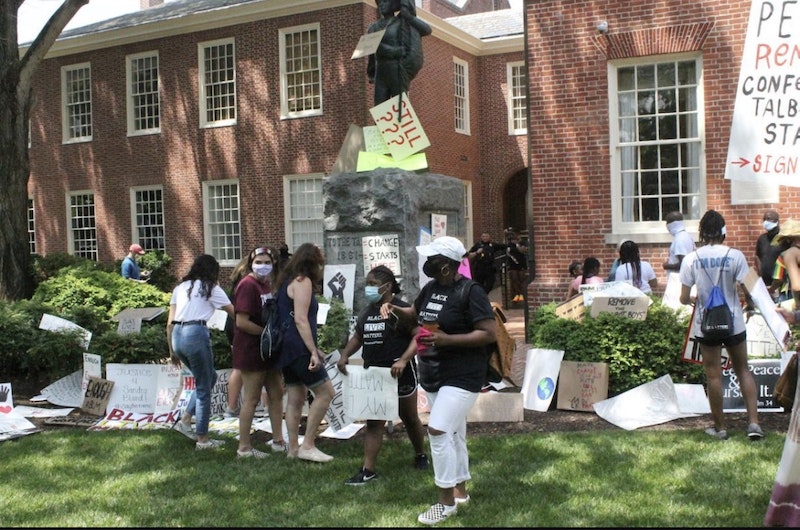 About 10 protesters were already in front of the Talbot County, MD courthouse when I arrived. We were gathered to protest the County Council’s decision last week to keep the Talbot Boys monument—honoring local soldiers who fought for the Confederacy—on the courthouse lawn despite years of requests to have it torn down. By one p.m., nearly 100 people surrounded the area. I stood in front of the monument holding a sign that read, “Time’s Up for the Talbot Boys,” while my friends Tori, Jazmine, and Heena stood a few feet away holding up a Black Lives Matter banner.

There have been at least five anti-racism protests here since George Floyd’s killing, but because of work, this was the first one I could attend. All the previous protests were peaceful; no Boogaloo Boys showed up, and the police didn’t beat up anyone. A few rednecks would drive by and yell, “Make America great again.” I hoped nothing bad would happen this time.

A white man in a cowboy hat, button-down Wranglers shirt, jeans, and cowboy boots took pictures of the monument from different angles. He also wasn’t wearing a facemask. We kept an eye on him and tried to figure out his intentions. Eventually the man asked someone from the crowd to take a picture of him standing in front of the Talbot Boys with his thumb up, and that’s when a protester confronted him.

“That monument is to honor the families who served in the war,” he screamed at the protester, obviously forgetting that they fought against the United States. It looked like a fight was about to break out between the two men, so I stepped in and held my sign in front of Cowboy Hat Man’s face. A crowd soon surrounded him and told him to leave. “I fought in Vietnam with black people,” he shouted. Finally, a policeman escorted him out while the protesters chanted, “No justice, no peace.”

Tori was the first to speak at the rally. “We are arguing over a 100-year-old statue,” she told the crowd. “What’s going to happen when we start trying to take real steps towards dismantling systemic oppression? This is the first step towards becoming a more anti-racist community.”

Other speakers included a woman who read a poem condemning the monument, a local progressive activist named Denise who mentioned the Talbot Boys is the only confederate monument still standing in Maryland, and a pre-k teacher who encouraged fellow white people to do their part in the fight against racism.

Councilman Pete Lesher—one of two County Council members who voted to remove the Talbot Boys—was one of the last speakers. He told the crowd he’ll keep fighting to have the monument torn down, and that the protesters gave him hope. “They are writing letters to the newspapers,” he said, “they are writing to the county council, they are showing up at the courthouse square and showing their displeasure with the course of action.”

Talbot County is slowly changing. The local NAACP chapter used to be the only people who called for the Talbot Boys’ removal, but now more people are speaking out. Even Council President Corey Pack—who is both the council’s only black member and Tori’s dad—has evolved over the years; he used to be neutral about the monument, but now supports its removal. Pack and Lesher are still up against the other three Council members—Chuck Callahan, Laura Price, and Frank Divilio—who represent the part of Talbot County that doesn’t like change.

Both sides of Talbot County showed up at the protest. Some of the cars that drove by honked their horns in support while other drivers yelled “Blue lives matter.” Four young white men stood around the Talbot Boys in order to protect it; one was wearing a confederate soldier’s hat. They didn’t say anything until they traded taunts with some of the protesters. I asked the boys, “Don’t you have some cousins you need to fuck?” A protester said that was uncalled for, so I apologized and left the boys alone. Note: a protest is not an appropriate place to be a smart ass.

I left wondering if this would change anything. Millions of people throughout the nation are crying out for justice right now, but is anyone listening?