Doing Nothing is Not Acceptable 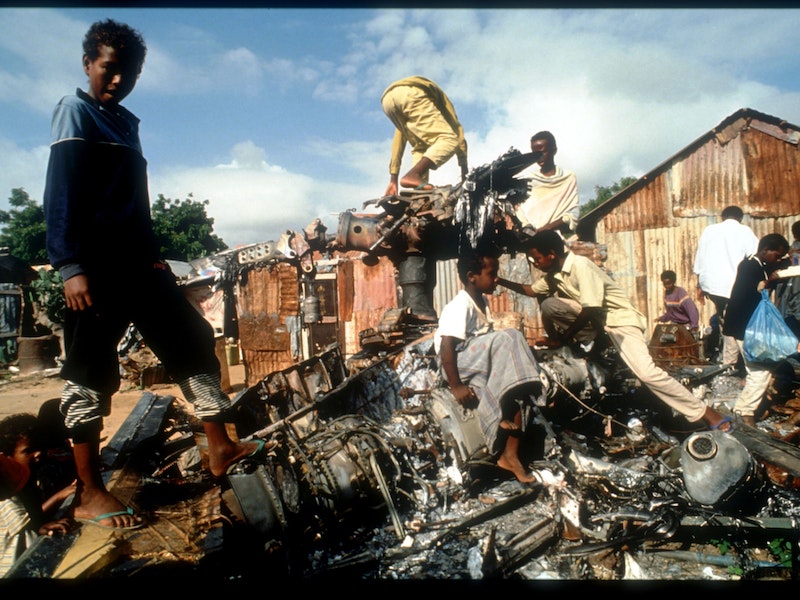 In the summer of 1992 the U.S. Army took on a non-combat role distributing essential services to survivors and refugees of The Somali Civil War. At first America’s humanitarian objectives were simple, but things got sloppy once Mogadishu’s Somali National Alliance (SNA) rose to power shortly after the mission began. The SNA was led by cunning warlord Mohammed Farrah Aidid. It was one of many loose-knit guerilla organizations vying for regional power amid the ongoing chaos that emerged after the 1991 fall of Siad Barre’s administration. The SNA gained dominance through mass murder, torture, and gang rape. Somalia’s long-standing quagmire of cultural, political, and tribal rivalries made it impossible to maintain a humanitarian effort. Experienced combat strategists accustomed to fighting for or against governments could hold no ground in the lawless country.

Turn to the autumn of ‘92 and Timonium, Maryland’s Dulaney High School. It was there that a 12th grade current events class analyzed what the army’s next move could be in Mogadishu. The class’ teacher was a perky guy named “Mr. Vee,” a propagandist who had no problem with the shameless paternalism of Uncle Sam and The War Machine. Standing before Old Glory and portraits of Founding Fathers, he’d jabber endlessly about free enterprise and how the rest of the world worshipped America’s “model” democracy. It felt more like a high-pressure sales pitch for The American Dream than any course of study.

Mr. Vee gave the class an essay assignment in which students had to defend one of three government approved strategies for Mogadishu: diplomatic sanctions, violent military action, or third party arbitration (UN-led peace talks). There was a fourth strategy which he didn’t mention: since there was no direct call for foreign assistance, America and all non-African forces could avoid taking part in the Somalian conflict. I was the only student to back that option.

I believed that nothing going on overseas deserved attention more than our bigger domestic troubles (i.e., the racial tensions and police brutality issues connected to the Rodney King Trial, the deadly AIDS epidemic was still raging, Roe v. Wade and abortion rights under attack, etc.). I couldn’t understand why America refused to focus on its own problems. What was so noble about mucking up another country overrun by political chaos and guerilla factions? Yet again, the lessons of The Vietnam War were conveniently forgotten just so the military could defend “our freedom” by playing Cops Of The World as flag-waving boot-lickers like Mr. Vee applauded every grandiose move.

Each student had to summarize their essay verbally in class. Nervous suspense welled up as my turn came: ”If a country doesn’t want our help why should we give it to them? If the Army has to be brought into any war the government better not dump our tax money into it unless they’re sure America’s help is definitely gonna be accepted. Somalia didn’t ask anyone for help, so I say the Army should just get the heck outta there and let the Somalian people handle this themselves.” Mr. Vee took a deep breath. He said, “Doing nothing is not a solution. That’s not acceptable. You’ve failed.”

No debate, no chance for other students to consider whether or not they agreed with me, no respect. Mr. Vee invited the class to openly discuss all of the essays except mine. This was one of many situations that taught me how to hate school, teachers and academia. It was the first time I’d ever failed a school assignment simply for disagreeing with an overzealous patriot.

October 1993 brought The Battle of Mogadishu, a harrowing event dramatized in the 2001 film Black Hawk Down. The melee erupted when the US dispatched an elite group of army rangers to kidnap Mohammed Farah Aidid from his headquarters. It was a failure due to the unrelenting guerilla resistance that overtook the Americans. As a consequence of the defeat, SNA fighters and their allies chained two dead rangers to a truck, doused them with gasoline and burned them beyond recognition while dragging their flaming corpses around the city in a raucous victory celebration.

Less than a month later President Bill Clinton announced that the army would abandon its Somalian objectives. Nothing was done in retaliation for the Black Hawk Down incident. Ever since The Battle of Mogadishu the U.S. has made sure to stay out of Somalia.