Popular Democracy and Its Discontents

Thomas Frank’s The People, No is a smart book on the original Populist movement and how the meaning of the word “populist” was inverted by the rich. 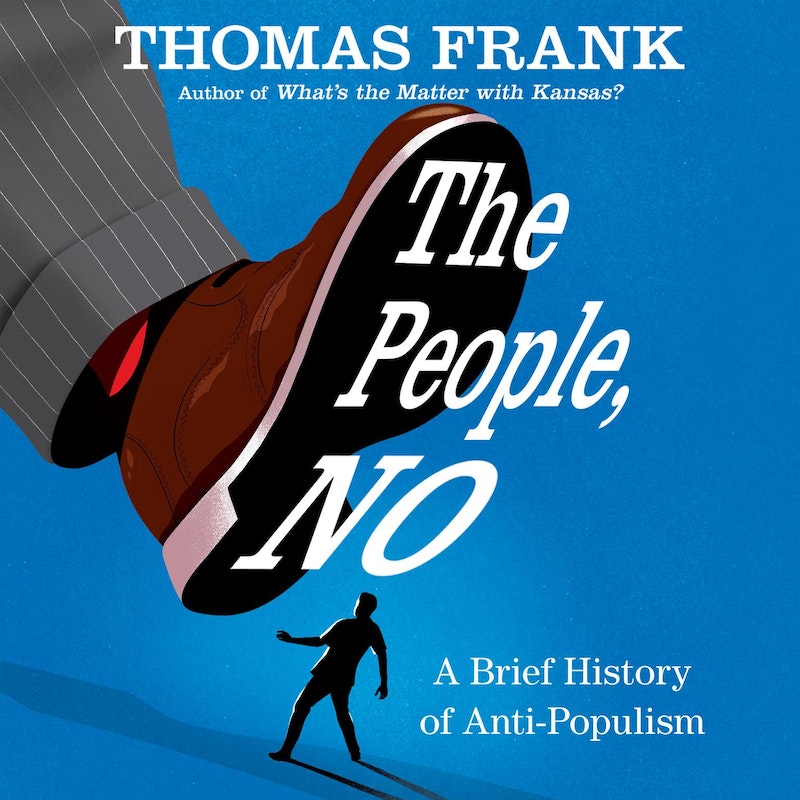 With the Democratic National Convention over, let us now mock infamous idiots of the past. Thomas Frank is one of the few great American political writers left publishing, and his new book The People, No is one of his best, if not his most urgent and pressing. “Populism,” like “fedora” or “purple hair,” is a semiotic bomb, a word invoked to describe the exact opposite qualities of the original capital-P “Populists” of the late-1800s in America. When one hears “populism” in the West, rabid mobs of ignorant savages appear before the mind’s eye. They’re luddites, racists, bigots and morons. They want nothing more than to roll around in their own shit because they’re animals, and they don’t deserve an equal part in democracy.

That’s the subtext—or post-Trump, often the text—of modern “anti-populism,” which Frank only started writing about in the process of researching the original agrarian Populists. He cites op-eds by Jamelle Bouie and Andrew Sullivan, among others, written in the wake of Trump’s election arguing against popular democracy, and that Trump voters are subhuman unforgivable traitors. A month after the election, Daily Kos ran this headline: “Be happy for coal miners losing their health insurance. They’re getting exactly what they voted for.”

The Populist movement of the late-1800s was made up of people who “forced the country to acknowledge that ordinary Americans who were just as worthy as bankers or railroad barons were being ruined by an economic system that in fact answered to no moral laws.” Jungle law of freedom. The original Populists were single-minded in their goals: get off of the gold standard and transition to a fiat currency, universal suffrage, regulated railroads, monopoly-busting, the income tax, and the direct election of senators (before 1913, senators were chosen by state legislatures). The Populists were not only the first formidable third party effort in America; they were the first movement that tamed capitalism. This scared everyone with money and power.

William Jennings Bryan was their man, but he couldn’t withstand the full court press of both parties, the business sector, and almost every newspaper in the country against him. You can see him depicted as a swarthy Mediterranean pirate murdering the Statue of Liberty in the cartoons. He’s also done up as Satan. Who knows if Trump’s reputation will soften with time—Bush 43’s inexplicably has—but not everyone can be Satan. Does the comparison mean anything if the same newspapers used it on FDR and Donald Trump?

Bryan and his supporters were “deplorables” to the elite at the time, and the lurid drawings and character assassinations of FDR are easily explained through the eyes of a tycoon: Frank relates an anecdote about a Southern gentlemen who hired an entire new staff for his house when the government offered them more money. He even had to find a new cook! “I offered them free room and board. I treated them well. And they walked out on me!” When you look at it that way, FDR and Hitler aren’t all that different.

The Populists of 1896 were a multi-racial coalition of farmers and rural workers who were sick of being screwed by the government and plutocrats. Frank writes: “Populism stood strong for human rights. Populism had prominent women leaders. Populists despised tyrants and imperialism. Populism defied the poisonous idea of white solidarity.” It was not the torch-wielding mob of Klansman conjured when one invokes “populism” today. How did this inversion happen, and is it even important? I don’t know how anyone can ask that question—the original Populists were smeared by the media, tycoons, and both political parties as being dirty, dumb, and ungrateful, demanding handouts and heads on plates. The inversion of the meaning of the word “Populist” to “populist” was a conscious act of neutralization that hit upon the movement’s real strength: its racial diversity.

The Populists understood that the struggle of labor and black Americans overlapped significantly, to the extent that the only way for either to succeed fully was to work together. Hence the immediate tarring of the Populists as racists to split them up and misrepresent them to the world. At the turn of the 20th century, universal human rights wasn’t a common belief, and neither was the need for a social safety net. There was much more an assumption adopted from febrile Britain, that one was born into one’s station, and to advance upwardly in society, well, if you couldn’t do it you just didn’t try hard enough, or you weren’t good enough.

Frank writes that today, “Just as in 1896, populism is supposed to represent the appetites and vulgar urges of the body, in revolt against the higher faculties of thought and reason.” Look no further than the dozens of op-eds listed that are in our recent memory, and put against the material published in 1896 and throughout the 1930s, the similarities are more than striking. It’s the same story, and while the capitalists’ motivations and methods make sense, it’s the media class who act as handmaidens that infuriate me. You can’t expect an octopus to keep to itself, but it’s the media’s job to stab it so real ink spills for everyone to see. But it’s impossible: the capitalists own the newspapers, and largely, these people like being “kept” and cow-licked from anything ambiguous or dangerous.

The “cranks” of yesterday become the progenitors of progress, “brave stewards” of a world that wasn’t ready for their noble ideas. FDR and the New Deal reigned in the 1930s, even with hysterical aristocrats and major newspapers comparing him to Hitler and Stalin (Carl Jung, visiting America, saw Roosevelt speak and said he had “every quality of a dictator”).

Particularly striking are the political cartoons laid out in the middle, going from the 1890s to the late-1920s and 1930s, and then right to the late-2010s. They could be all be about the same person, they all could’ve written by the same person, and they all tell the same story: there’s nothing more dangerous than an angry mass of people. Not only are they stupid, bigoted, and violent—they’re evil, too, even satanic. Bryan, Roosevelt, Trump, and all of their voters are depicted as devils and little demons in these cartoons, spanning over a century. “In a precise replay of conservative humorists of 1896, the liberal humorist of 2019 laughs off the suggestion that farmers be represented on the sophisticated body that decides U.S. monetary policy.”

This attitude hasn’t gone away. Hillary Clinton bragged in 2016 about being popular in areas of the country responsible for producing the “most gross domestic product,” and now the DNC and every major media outlet other than Fox is essentially telling people to vote for Joe Biden “or else.” Or else what? Where to begin… its scarlet letter, red scare bullshit reheated for a new era, one where the new original sin is racism. Note how none of the popular mainstream discourse in the months since May has emphasized bringing poor people together of all ethnicities over their shared cause: wealth redistribution.

Again, it’s obvious why the capitalists do what they do. It’s one thing to get fucked. It’s another thing entirely to get fucked and be told that you’re getting a massage. There’s a very simple lesson to take from the Populists and The People, No: anti-racism is used by capitalists as much as racism to divide poor people. The notion of separating class struggle from racial inequality is impossible without failing both.

As always, Thomas Frank makes his case in clear, clean prose. At 55, he’s one of the only writers of his generation left that hasn’t sold out politically or devolved into self-parody. His work, unfortunately, stands tall among some very tiny trees. The world needs more journalists like him—relatively heterodox, which sounds crazy, but I’m sure his mild indictment of “cancel culture” towards the end of the book will indeed cancel him out for a lot of young and older, immature readers. It’s their loss, but unfortunately we have to share the world with them. We need more Thomas Franks.