Half Symbol, Half Machine—All Cop

Kamala Harris and other phony narratives. 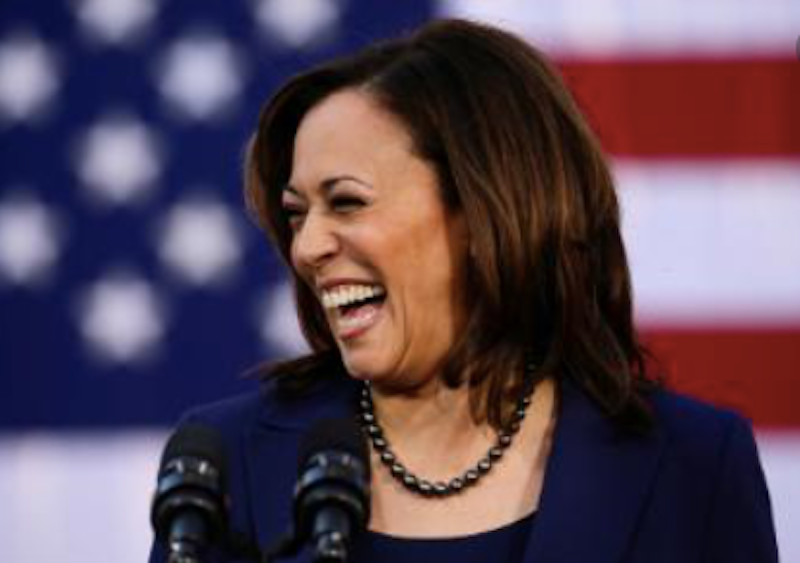 In philosophy or computer programming, you pay a terrible price for self-contradiction. In politics, you’re hailed as a hero for “squaring the circle”—because you’re really helping a vast, stupid populace overcome its cognitive dissonance, helping it pretend its conflicts can be solved by government. That’s where Kamala Harris, the Democrats’ vice presidential candidate, comes in.

Virtually every presidential or vice presidential candidate, I’ve long maintained, is in some sense a moderate. Presidents, unlike representatives from smaller districts, are supposed to appeal to the whole country (or at least half the country, or at least the half who vote, or at least a plurality of those who vote). So Harris, like her welfare-statist Clintonite pals, is in policy terms mostly an amalgamation of all the terrible but unsurprising, budget-busting but not Marxist, things her fellow establishment Democrats believe.

But like Obama before her, she’ll be propped up by an adoring and stunned media as a symbol of racial reconciliation and other Hegelian conflict-resolutions—except Obama served that function when the country was in a relatively good mood (all things considered), whereas Harris will be doing her time as half “machine” politician, half “inspiring” symbol amidst riots. And through it all, as they say: Kamala is a cop.

Luckily for her, as the Clintons understood three decades ago, “law and order,” like military spending, is a great way for a leftist to show “balance” in his or her political views without reducing the power of government at all. Why do something libertarian to prove your moderate bona fides when you could just add some right-leaning authoritarianism to your natural left-leaning authoritarianism? So, just as Al Gore liked military spending, Harris can point to her ruthless, sometimes innocents-railroading record as California’s laughing, sadistic, prisons-filling attorney general to show she’s middle-of-the-road and (ironically) “harmless.”

She’ll have to do her law-and-order signaling subtly, though, because Democrat voters sympathize (or pretend to) with the criminal hordes running amok in the streets right now, not with the cops who occasionally try stopping those hordes. Whatever contradictory signals she and her running mate send will be celebrated as brilliant and peacemaking by the media, though. No points off for contradictions: the primary liberal psychological impulse is the evasion of reality.

It‘s not just the journalists who will cheer, either. By accident or design, be it zeitgeist or algorithmic nudging, entertainment media such as various subsidiaries of AT&T (long allied with the National Security Agency) seem to have been prepping us for well over a year with imagery that happens to combine racial reconciliation, plague control, positive aspects of police surveillance, and female heroism.

Maybe it’s just our times, but HBO, for instance, plainly understood when it re-aired last year’s Watchmen mini-series on this year’s Juneteenth how that show’s mask-wearing black heroine, time-traveling in a racially-divided Tulsa, would seem to clash with that same weekend’s Trump rally (similar imagery has been cropping up in current DC Comics, HBO’s West World, and elsewhere). We’re being readied for Harris and her allies one way or another.

Social media, as we’ve come to expect, is already doing its part, with Facebook, for instance, blocking links to the site KamalaHarris.info, which merely presents true, albeit unflattering facts about Harris, with campaign-ad-like dazzle. Google last week, coincidentally or not, had to be shamed into returning results for the search “socialism and racism” instead of letting their site continue to respond, with feigned innocence, by asking users who typed in those terms whether they meant instead to search for “capitalism and racism” (and offering plenty of hits for that combo).

To the Democrats, just like in the minds of the rioters in the streets this year, every proposed symbolic blow against the market—every budget increase and new regulation—will seem magically to be a blow against racism as well and thus one illusory step closer to purging America of hate and smashed storefronts in major cities. Smash white racism and prosperity will rain down upon all, goes the implied thinking, which will preempt any coherent economics debate for at least the next few months, possibly years.

Through the whole self-deluding process, with no real end goal besides ousting Trump in November, Harris will keep doing the vapid, phony, brazenly question-evading schtick she does with such gusto. Even softball questions from comedic sympathizer Stephen Colbert brought out her rallying-speech-at-the-sales-seminar side: loud, upbeat, devoid of answers. Why did she denounce Biden as a sexual harasser during the campaign but endorse him now, asked Colbert, and with uproarious laughter, Harris just kept responding, “It was a debate! Literally it was a debate! It was called a debate!” Why, she’d never heard anything as hilarious! Laugh with her all the way to the voting booth, you fool!

Meanwhile, Twitter employs Harris’s former press secretary—one of innumerable things about the establishment that ought to give one pause these days but that don’t seem to worry establishment-adjacent experts in the slightest. Gotta get rid of Trump, after all. Twitter is the ostensibly apolitical site that temporarily suspended comedy account Babylon Bee for purported misinformation and then restricted access to anti-leftist comedy account Titania McGrath later in the same day.

As the election nears and, for one reason or another, a sense of heightening crisis inevitably builds, expect people in both private and public positions of power to become more authoritarian and censorious, not less. Once Harris is safely in the v.p. office (awaiting a faltering Biden’s eventual resignation for health reasons, no doubt), there will be time for her and her cronies in media and social media to relax a little and think of more leisurely, conventional ways to control us, without looking so panicky about it. It will be hailed as a return to politics as usual, as if that were our long-awaited salvation.