Time’s Running Out for The New Yorker

The old joke about issues piling up is now a reality. 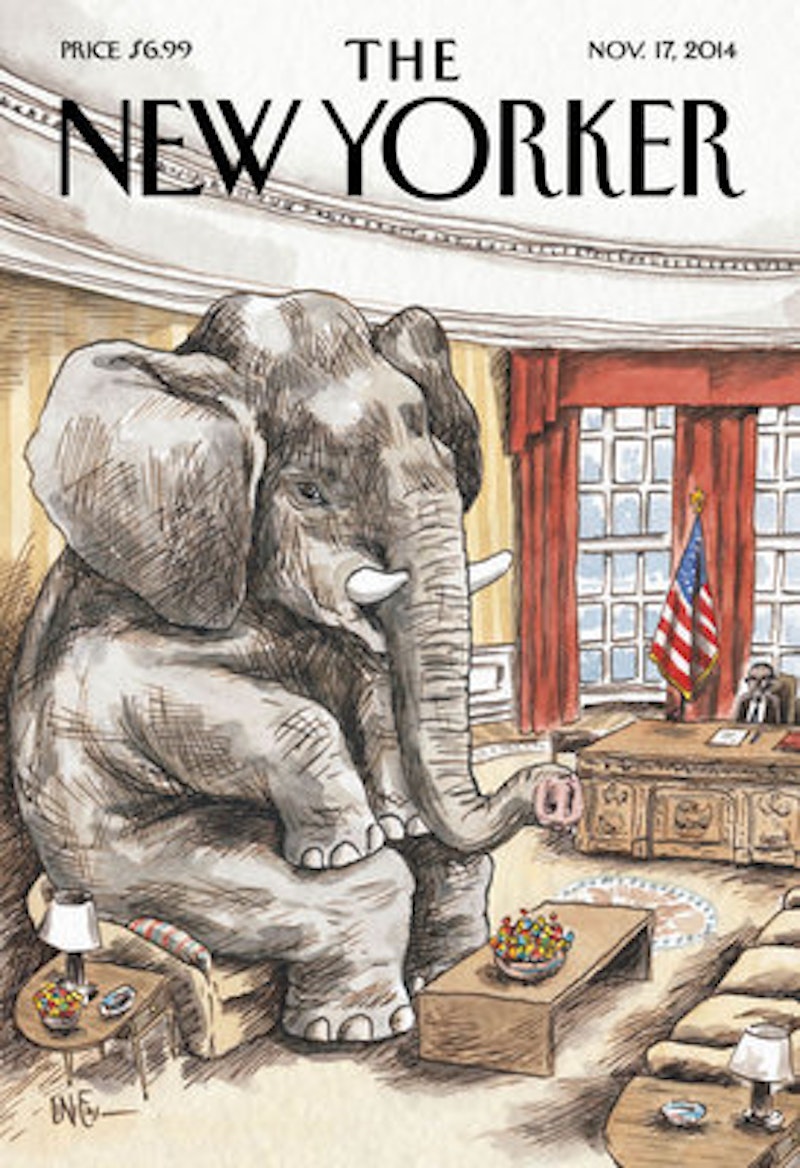 I’ve no exact idea of how the Newhouse family’s Advance Publications/Conde Nast are faring financially, but you needn’t be a media analyst to figure that it’s a bleak picture. Skip all the obligatory razzmatazz about the once powerful company’s enthusiastic embrace of digital publishing, and think instead of the enormous overhead—much of which is tied up in editorial content—that it carries to print its many titles. Yes, Vogue for example, remains stuffed with advertising, but outside the boardroom who knows what sort of discount pricing is taking place? And, honestly, when was the last time anyone you know raved about an article in Vanity Fair, which not so long ago was a must-read monthly?

Right now, I’m thinking specifically of the weekly New Yorker—which I’m betting switches to a biweekly schedule sometime in 2015—and the tsouris editor David Remnick must be feeling. The Nov. 17 issue, for example, contained a long, and typically well-reported and researched article by Ryan Lizza about Hillary Clinton’s presumed 2016 presidential campaign and the likelihood, given the Democratic Party’s history in open primary marathons, that some man or woman will emerge and at the least give the Clinton Machine temporary night frights.

It’s a mostly dispassionate assessment of the ’16 Democratic field, and Lizza did his legwork, traveling to New Hampshire, Virginia and Iowa—on his magazine’s dime—and the result was one of the best political articles of the past several months. One, I’d surmise, that relatively few people read. Yes, I’ll grant that the online version collected a reasonable number of pageviews, but, as is the case with stories that are longer than 500 words, chances are it was a skimmer, even for those invested in political commentary and reporting. Really, when there’s Politico and similar quick-read sites, how many people will invest the time—and it’s a half-hour expenditure—on a tablet, PC or, even more absurdly, mobile phone?

What’s worse, at least for Lizza and The New Yorker, is that the article was mostly written before the midterm elections, which meant the author was making certain assumptions, which appeared safe at the time, but in this case backfired. Lizza spent a lot of time with outgoing Maryland Gov. Martin O’Malley, tracking him in Iowa in October as the ambitious pol campaigned for local candidates while introducing himself to voters ahead of the Iowa caucuses for 2016. But here’s where Lizza got screwed: while O’Malley was unofficially stumping for president, back in Maryland his Lt. Gov., Anthony Brown—who ran an awful campaign in the very blue state, accentuated by his barrage of gratuitous and really mean television attack ads—was unexpectedly in a tight race with the GOP’s putative sacrificial lamb Larry Hogan. As it happened, Hogan won by five points, which was not only stunning given Maryland’s two-to-one Democratic advantage, but also put O’Malley’s plans in serious jeopardy. If the incumbent governor can’t even deliver an election to his hand-picked successor, what does that say about his political savvy? (O’Malley has balls the size of an elephant, but isn’t in the same league politically as a Bill Clinton or Mitch McConnell.)

Lizza had a few days to touch up the article before publication, eliciting O’Malley’s predictable response that he wasn’t on the ballot, so it won’t affect his plans. Sure, Marty, spin that to the donors, whether “dark” or in the sunshine, in New York. As for Lizza, all the time (and expenses picked up by his magazine) he spent with O’Malley, which comprised perhaps 20 percent of his piece, was for naught.

Aside from the ostensible peg of the story—that it’s foolhardy to coronate Hillary Clinton in 2014—Lizza did include an excellent sub-plot with former Virginia Sen. Jim Webb, the Vietnam vet who, unlike Clinton, was against the Iraq War and is far more vehement about reining in the wealthy men and women—let’s use Wall Street as a euphemism—who increasingly control elections and to whom Hillary (and her husband) is indebted to. Whether Webb pulls a Jon Huntsman and runs a half-hearted campaign—if he gets in at all—remains to be seen, but he’s a formidable “beer-track” challenger who’d appeal to centrist Democrats who voted for Obama but were left dissatisfied with his hope & change presidency.

But let’s wheel back to The New Yorker’s predicament. How can the magazine, and its owners, continue to justify spending large sums of money on editorial content that won’t be read? (A telling anecdote: time was, when your New Yorker subscription was about to lapse you got one reminder. No response, and you were cut off. But desperate times… in the past three months, I’ve received seven communiqués, by mail, about the status of my sub. Which doesn’t expire until July of next year!) I doubt, for example, that Lizza is paid minimum wage, just like the many staff writers who contribute three or four articles a year. The magazine still has a veneer of prestige—even among readers like myself who don’t agree with its unfailingly liberal politics—and obviously a storied history that sleazy websites like BuzzFeed and Salon (you name other journalistic sewer rats, I haven’t the stomach) will never realize. But that doesn’t count for much today.