Orrin Hatch Will Soon Be Third in Line for the Presidency

Some argue line of succession should be changed. 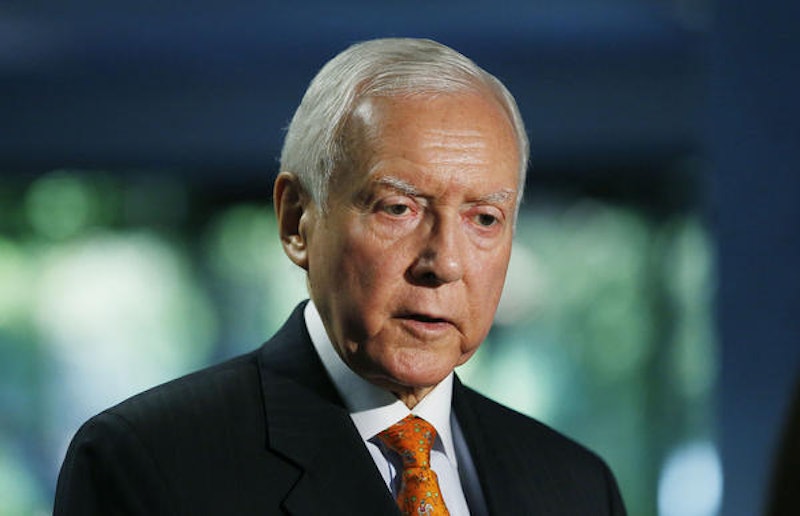 When Republicans gain the Senate majority in early January, another little-noticed shift will occur—there will be a new guy third in line for the presidency, Sen. Orrin Hatch. The Utah Republican will become president pro tempore of the Senate, a seemingly honorary position for the longest-serving member of the majority party.

But it’s a serious enough shift that he’ll get a security detail, a small staff and an office at the Capitol, reports The Salt Lake Tribune. After all, he’ll be taking over a constitutional office that puts him behind the vice president and Speaker of the House, to become president. Hatch, 80, is getting the gig because, according to custom, he’s the most senior member of the majority party. He’ll take over from Sen. Patrick Leahy, a Vermont Democrat first elected in 1974 and Hatch’s frequent sparring partner on the Senate Judiciary Committee.

The president pro tempore presides over the Senate in the absence of the vice president and is usually the most senior member of the majority party.

Hatch, lucid and eloquent at 80, makes sense for the third-to-succeed-the president position. He was first elected in 1976. He’s served as either the chairman or ranking minority member of the Senate Judiciary Committee (depending on whether the Republicans controlled the Senate) from 1993 to 2005. He previously served as chairman of the Health, Education, Labor and Pensions Committee from 1981 to 1987, among other top Senate roles.

He formed an unlikely partnership with Sen. Edward Kennedy, the late Massachusetts Democrat. “His Senate career has been shaped by impulses that are sometimes at odds with each other: a strong conservative philosophy and a sense of responsibility to pass meaningful legislation,” writes the 2014 Almanac of American Politics.

But such a (potentially) key position has been held by some real clunkers in recent decades, including past segregation enthusiasts like Sen. Strom Thurmond (R-SC) and John Stennis (D-MS). Sen. Robert Byrd held the post four times, even when in failing health—in fact he died in 2010, at 93, as the third-in-line to succeed the president.

Some argue line of succession should be changed. In a December 2012 article for The Week, Joshua Spivak lamented the “very foolish and anachronistic Senate tradition” of placing the most senior majority party senator so high on the presidential chain. That after the death of Senate president pro tempore Daniel Inouye, who had represented Hawaii in Congress since it achieved statehood in 1959. “In the not-by-any-means-inconceivable possibility of a deadly attack on the federal government that took out the president, VP, and speaker, an 88-year-old would have been president at a moment of the greatest crisis in the country's history,” wrote Spivak, a senior fellow at the Hugh L. Carey Institute for Government Reform at Wagner College.

It doesn’t have to be this way, Spivak added. “What makes this all the more surprising is that there is no Constitutional requirement that would place an enfeebled man so high up in the line of succession. The presidential succession laws can be changed by acts of Congress, and have been numerous times in the past.”