What does a Nobel-Prize winning economist write? Whatever he wants. 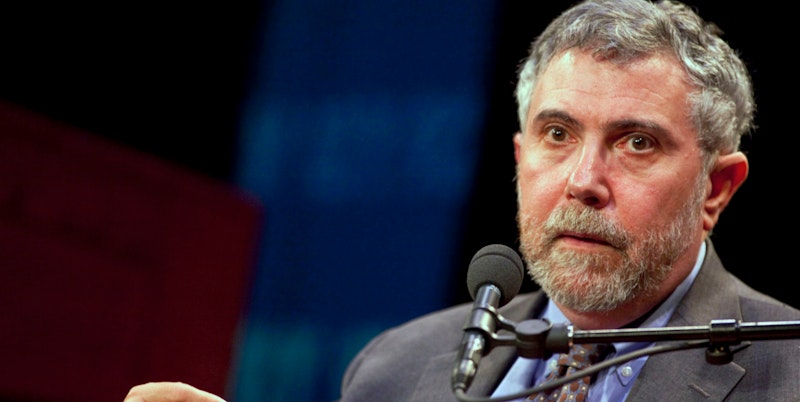 "If you saw Suzanne Vega years ago, as I did, and wondered if she's still as good in live performance, she isn't—she's better." A Facebook post by some acquaintance, you think? A tweet? A tumblr? A small blog from a semi-anonymous writer who likes to share concert-going experiences with their friends? None of the above. This is Paul Krugman, and the venue for his clichéd, pedestrian fanboy gushing about Suzanne Vega is the website of The New York Times.

I'm trying my best to restrain the contempt, because I generally like both Krugman, and Vega, and I don't think there's anything wrong with fanboy gushing. Krugman loves Suzanne Vega, and wants to share his love with the world—nothing wrong with that. Even if he wants to go on to tell us about his meal afterwards ("The food in Joe's Pub was very good…") well, that's fine. Lots of people use the Internet as a way to share the equivalent of personal letters with friends, and why shouldn't they?

But this is not a personal letter. This is a post to the website of The New York Times. Krugman labels the piece as "personal," but he's not actually sharing it with friends or family or Uncle Jimmy. He's sharing it with you, and me, and the rest of the world—this is a piece of cultural criticism on one of the most prestigious websites in the United States. And what does this cultural criticism say? Its says Suzanne Vega is awesome and she played some of my favorite songs and then I got food at Joe's Pub and hey, here's a picture of me and Suzanne Vega, eat your heart out, losers.

If there's a trace of bitterness… well, sure, I'm bitter. I'd like to write cultural criticism for the Times, too. But to do that, I have to pitch things, and have ideas, and maybe even employ paragraph transitions. But Krugman can just write a vacuous numbered list, and hey, presto, there he is on the Times, writing immortal lines like "Has there ever been another widely heard song, let alone a massive hit, written in blank verse?" Is that supposed to qualify as insight? As brain activity? Why are the editors letting him print this crap?

They're letting him print this crap because he's Paul Krugman, Nobel Prize-winning economist, liberal gadfly, enemy of Republicans, mocker of inflation hawks. Krugman is one of the NYT's most visible voices and assets; he's a hugely successful brand. People are not just interested in what he has to say about economics; they're interested in him, personally, unto the Suzanne Vega worship and what he had for dinner. Krugman is a big enough name that he can print what he wants. If he felt like running his laundry list, I suspect the Times would let him.

This isn't exactly a new phenomenon—writers from Sylvia Plath on down have long been public figures and celebrities, and people have always been interested in their lives as well as in their writing. The Internet though, with its demand for content and its ease of publishing, has made it possible for celebrity writer brands to let their fans in on the minutia of their lives in new and copious ways, whether on social media or from the platform of the Times.

These developments aren't all bad. I like the informality of the Internet, and enjoy the way that blogs can escape the tight confines of a particular pigeonhole. I don't really want to read Jonathan Bernstein's baseball posts, but I like that he's allowed to write them.

But, then, Bernstein actually works on his baseball posts; he has expertise and knowledge, and he takes time to put both in a coherent form. Krugman, on the other hand, is flaunting his frivolity. It's like he wants everyone to know that he's so big, and so important, that he can use the Times as his personal social media account. In Internet journalism, it's not what you write, but who you are—and he's Paul Krugman. Look on his laundry list, aspiring cultural journalist, and despair.