Everybody else does though. 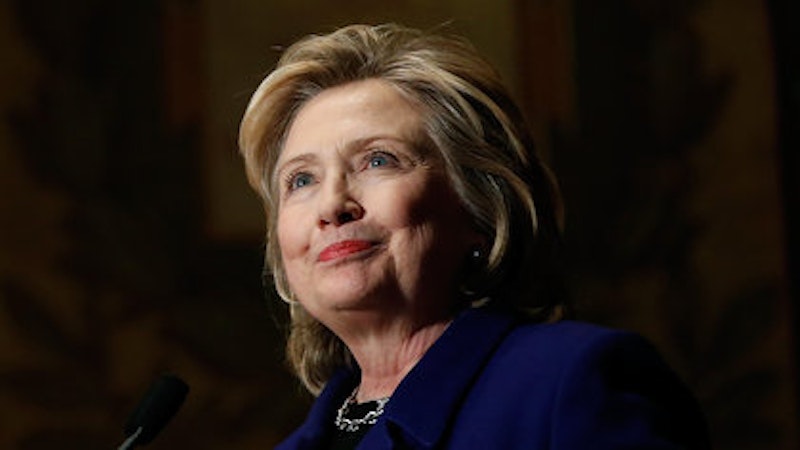 Hillary Clinton is boring, uninspiring and a relic of the 1990s. She voted for the Iraq war, too rich and too cautious. "In general, young people don’t have the same passion for Hillary that they had for Obama. Neither do African Americans. Neither do many liberals," Peter Beinart declared at the Atlantic, summing up much of conventional punditry. The chair of the RNC, Reince Priebus, even confirmed Democrat's worst fears when he declared, “If your job was to unify the party and raise a ton of money and get a ton of volunteers on the ground, I promise you, you would want no other opponent to run against than Hillary Clinton.”

I can't predict whether or not Clinton will win the 2016 Presidential election. But it's pretty clear that the hand-wringing and/or gloating about Hillary's weaknesses are misguided.

First, suggesting that Hillary can't provoke enthusiasm is a willful exercise in selective memory. Obama won the Democratic primary in 2008 with an inspired campaign that generated massive turnout among key constituencies like the young and African-American voters. But even so, Clinton was hardly crushed. Both candidates received somewhere around 18 million votes—more than any other primary candidate from either party in history. After the fact, it's always easy to blame losers for losing. But compared to just about any candidate in history who was not Obama, Clinton ran a hugely successful campaign, and was very popular with the Democratic electorate. Lots of voters turned out for her once. There's no guarantee they'll do so again, of course, but if her wealth, shilly-shallying, or association with the 90s didn't stop voters before, it's reasonable to think that it won't stop them in 2016 either.

If Clinton's popularity had cratered since 2008, or if she’d been involved in a career-threatening scandal, then you wouldn't want to look to 2008 as a precedent. But she hasn't been involved in a scandal (no Benghazi doesn't count) and her popularity has, if anything, been boosted by her tenure as Secretary of State. Her numbers have dropped a bit recently, but she still has a very respectable 54 percent favorability rating overall, and a 90 percent favorability rating among Democrats according to Gallup.

The idea that a large number of Democratic voters are put off by Hillary Clinton, or won't vote for her, is a fantasy. Democrats love Clinton. If you’re a Democrat and (like me) aren’t keen on Clinton, then you’re an outlier, and probably shouldn't use your own feelings as a gauge as to how well she's likely to do in the nomination process.

Clinton's popularity is likely to dip as Republicans attack her and everybody sorts themselves into partisan boxes for the election. But the fact is, Clinton has been in the public spotlight for decades now. Not only is she quite popular, she's relatively safe. The chances that a Jeremiah Wright will be dragged out by opposition researchers is low. The recent effort to tar her as rich, for example, is just feeble. This is Hillary Clinton. She was First Lady; she's from one of the most powerful political families in the country. Everybody knows that. Voters are going to be put off because they suddenly realize she's really wealthy and powerful? Come on. People know what they're getting when they get Clinton. And most of them—and an overwhelming number of Democrats—like her.

There’s every reason to think that Clinton will win the Democratic nomination, and that she has as good a chance as anyone of defeating the Republicans in 2016, if she has a bit of luck and the economy continues on an upward trend. Why, then, all the pundit concern-trolling?

I suspect it's nothing personal. Newspaper writers and pundits want something exciting to happen. Clinton is old news; everybody knows about her. That doesn't give writers much to work with. They'd much rather have someone new and exciting—who has to struggle to get the nomination, rather than someone who just waltzes in with no drama. Reporters and political writers have every reason to be bored with and resentful of Hillary Clinton. There's no sign that the electorate shares their biases, though.