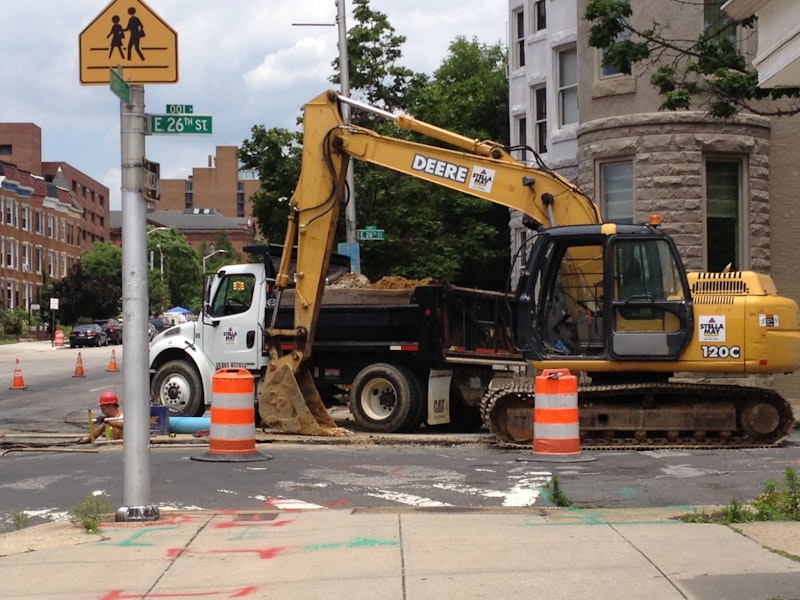 Back in 1990, my wife and I were in Hong Kong for several days, one leg of a long Christmas/New Year’s vacation. Walking around in a jet-lagged fog—the trip from Vienna to Hong Kong was brutal, length-wise, although exceedingly comfortable via Lufthansa, still in the era when flying wasn’t wrought with irritation piled upon irritation—the first thing we noticed was the weird dichotomy in the streets. Here was, in many ways, a hyper-modern city, with skyscrapers and shops full of up-to-the-minute gadgets, yet the material used for scaffolding buildings was bamboo, not metal. Similarly, workers used wheelbarrows to haul dirt and other debris. The modern crossed with the relatively ancient.

Today, 23 years later, as I look out my office window on Baltimore’s N. Charles St., or go out on an errand, a similar dynamic’s in place. Say what you will about the digital society—privacy intrusions, paying bills online, once-thriving brick & mortar stores going broke thanks to Amazon—but some humdrum projects are performed the same way as two generations ago. Right now, N. Charles St., this city’s main thoroughfare, is undergoing a painful, and interminable, renovation, creating traffic snarls and any number of attendant inconveniences, and though government officials say the work will be completed some time in 2014, no one really believes that.

Yet, once I capitulate to the motorist/pedestrian tumult—and living in Manhattan for 16 years has made me almost immune—I marvel that while looking at the hardhats, some manning the giant Deere trucks, others shirtless and sweaty, still others taking a two-hour lunch, it’s striking that taken in isolation (as pictured above) this scene knows no separate decade and is nearly identical to similar road work in, say, the 70s. I suppose the trucks have some computerized controls, but that’s beyond my sight; I just see the vehicles very slowly creeping on the streets, the same “detour” signs posted at various intersections, the forklifts shifting tiny amounts of dirt and concrete from one location to another. It all seems, in today’s hyper world, so primitive—but I guess no more cost-efficient method has been presented. Maybe it’s a union-desperately-clinging-to-waning-leverage situation, as might be indicated by the fact that if a drop of rain falls, all work stops, and it’s an early day for the employees.

Objectively, I don’t care one way or the other if the local transportation department is stuck in a time warp; really, you make your peace and figure out ways to navigate the disruption. It’s just odd that this industry hasn’t kept pace with others; you’d think that both the government and private contractors would attempt to save money and speed up completion of such undertakings, but that’s probably naïve. In Manhattan, scaffolding constantly mars the local landscape, obscuring architectural marvels, but then again the scaffolding racket—and it’s a not-so-enigmatic racket—is reputedly controlled by men whom I wouldn’t want to cross.

When the N. Charles St. renovations are completed, probably three years hence, the Mayor and Governor will preside over a ribbon-cutting ceremony that no one will pay attention to, and traffic will return to normal, with extra room on the streets. Still, the fact remains that this entire process is so glacial, it really could be 1968.