Re-visiting the wiretaps of the Johnson and Nixon administrations. 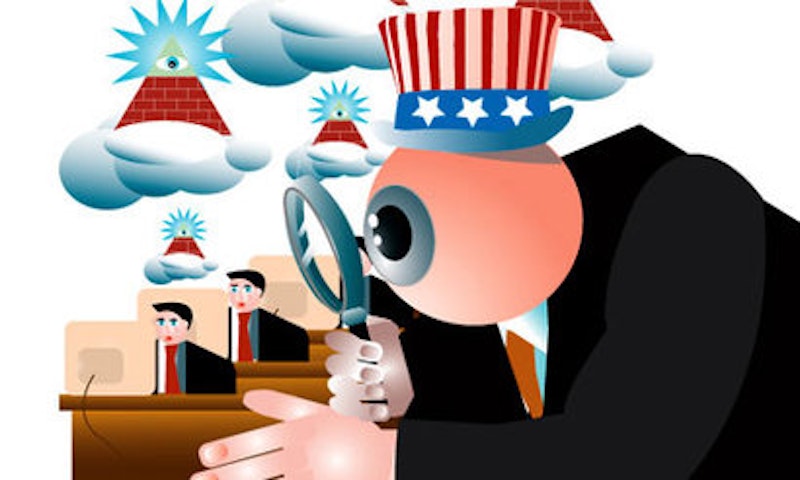 This just might be the most brazen story of government spying: The president of the United States wire-tapping the phones of the nation’s 50 governors. Or was it just Democrats?

It happened in the bad old days of Richard M. Nixon’s paranoiac presidency, a deliberate riff on the era’s popular practice of corporate espionage when stealing business secrets pre-dated today’s commonplace social science of opposition research. The methods and devices were simple and crude—you’ve seen the caper on TV hundreds of times—a disc the size of a quarter tucked into a dial-tone telephone receiver or a voice transmitter stuck behind a picture frame or under a table.

The FBI’s favorite was a device called a “pen register.” It was supposed to record the clicks when a phone was dialed and calibrate the receiving number. But any agent can verify that the pen register could also be used as a listening device. It is an early lesson learned that with the help of certain electronic enhancement devices attached to publicly regulated utilities, more than two people can listen on a telephone.

There were no drones, computers, satellites, huge dishes or programs called PRISM that could monitor millions of electronic transmissions in a given moment. The National Security Agency had not yet grown into the peeping-tom behemoth that it is today. There were no warrentless wiretaps. There was no Patriot Act. There was no FISA. Edward Snowden, the vainglorious 29-year-old high school dropout turned spy, was decades away from being born (Snowden has been formally charged with espionage). And Wikileaks was several generations from being possible. There was only the phone. And wiretaps.

Even so, electronic eavesdropping is nothing new. Shortly after the 1970 election for governor of Maryland, the Maryland State Police, assisted by an outside electronics expert, conducted a routine sweep of the governor’s private office as well as selected offices in the executive suite on the second floor of the antique State House. They were stunned by what they discovered.

What the surveillance team uncovered was not a conventional phone at all but a listening device. The red White House phone in the office of Gov. Marvin Mandel (D) was wired in reverse to act as an amplified wiretap that theoretically could monitor every conversation in the governor’s office.

This was not the first time a listening device was discovered in Mandel’s office. When he first took office in January, 1969, Mandel asked workers for the state’s Department of General Services, to unblock the formal fireplace in his office so that he and visitors could enjoy the warm glow of crackling logs and soothe the many intricate negotiations that took place.

When the blocks were removed, the workers discovered a microphone dangling from a cord in the chimney. There was no indication of how long it had been suspended there, within hearing range of the governor’s desk. Mandel was furious. As House speaker, he had sponsored legislation to regulate the use of listening devices in Maryland. And upon discovery of the offending red phone, he argued that the Nixon Administration was violating Maryland Law.

Jack Anderson, the muckraking syndicated columnist, was invited to interview Mandel in his office about the errant red telephone. When Anderson’s syndicated column appeared in hundreds of newspapers across the nation, several Democratic governors disengaged their red phones and the direct emergency lifeline from the White House. Mandel ripped his red phone from the wall. Mandel later brought up the experience at a conference of Democratic governors at Lake Huron, Ohio. Many of the governors around the conference table acknowledged having personal encounters with agencies of the Nixon Administration that bordered on harassment and investigation, mainly the IRS and the Department of Justice.

There is no direct knowledge of who installed the red phone or who reversed the wires to convert its function into a long distance eavesdropping device. Was it Nixon’s plumbers? Was the wiretap activated in the governor’s office by the Secret Service after Gov. Spiro T. Agnew was chosen as Nixon’s running-mate? Or was the bastardized red phone inherited from the administration of Lyndon Johnson, who had a perverse penchant for recording conversations to be later used as blackmail? And, of course, there’s the usual suspect, the FBI’s director, J. Edgar Hoover, who kept files on virtually every prominent elected and unelected person in America. Or was the entire red-phone network designed and installed with a single malevolent purpose in mind?

Consider this true story as related by Martin Underwood, a Johnson aide who later worked for Mandel: Johnson, during the run-up to the 1964 Democratic National Convention and the selection of a vice president, invited Robert F. Kennedy, attorney general, to the White House for a meeting. The two talked for a half hour. When Kennedy left, Johnson rushed to activate the secret Oval Office recording system. All he heard were squawks and squeals. “The sonofabitch didn’t trust me,” Johnson growled. Kennedy apparently came prepared with a scrambling device in his pocket.

There is no direct knowledge as to whether the red-phone system of direct communication between the White House and the nation’s 50 governors still exists, or if in the Internet age of instant contact the archaic system has been dismantled and abolished.

Yet there is and was no such thing as privacy even in some of the nation’s highest executive suites or even lowly row houses. A top official at NSA, only a chip shot away from the Maryland governor’s office, recently acknowledged that NSA collects “metadata” by the billions but that it doesn’t actually listen in on private conversations among the nation’s citizens. Yes, but it can. And one day maybe it will, if it doesn’t already without telling us.

Americans seem content with that ambiguity, believing that being bugged is being secure. Recent polls show that most Americans have no objections to being surveilled and surrendering a little privacy, to whatever degree, as long as they have the comfort of feeling safe from terrorist threats. Better to be bugged than bombed.

And during the recent cascade of leaks and official admissions of spying to thwart terrorist plots, privacy rights activists to the left and the right of center have been strangely silent on the intrusion issue. And even the nation’s top spy, Gen. Keith B. Alexander, the head of NSA, was praised as a patriot by liberals as well as conservatives during his testimony before the House Intelligence Committee.

President Obama, who earlier campaigned against the Bush Administration’s use of electronic surveillance, now supports data gathering as a necessary evil striving for balance somewhere between privacy and security. It has not been revealed, though, whether Obama has a red phone that connects to the nation’s 50 governors or if it’s rigged to eavesdrop on their private talks. Or take him at his word: “Trust me.” The government harvests numbers, but it doesn’t listen.

—Frank A. DeFilippo was press secretary to Gov. Marvin Mandel from 1969-77.