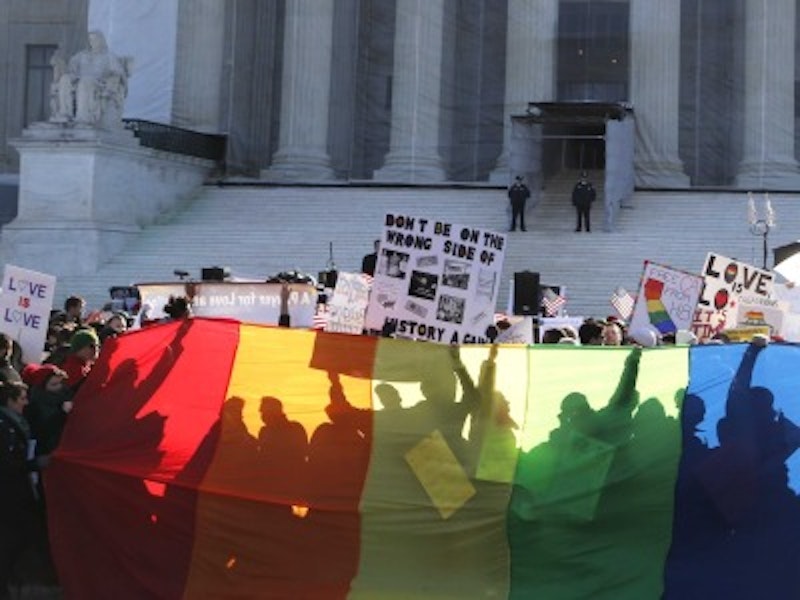 The U.S. Supreme Court has two basic functions: to interpret the Constitution and to review existing laws. But somehow the durable fable persists that the high court is above politics, yet all nine justices are political appointees chosen for their partisan views as much as their legal skills. The ability to win Senate confirmation is a must.

Some decisions imply a gift from the court instead of a statement of law and suggests judicial activism at its liveliest and most aggressive, an occupational affliction that conservatives usually attribute to liberals. Last week the reverse was true.

Very few times has the tilt of the court been more in evidence than last week. The nine justices not only made history in four separate and divisive rulings but they also revealed their inner feelings in public mockery and bitter dissents. In two rulings involving same-sex marriage, the court was swept along with the currents of historic social change.

And in the case involving voting rights, the justices seemed to be playing pure politics by usurping the authority of Congress to impose its partisan will in favor of Republicans. The 15th Amendment specifically states that “The Congress shall have the power to enforce this article [the right to vote] by appropriate legislation.” Affirmative action was kept alive for now. It was kicked back to the lower courts with the admonition to apply higher and more rigorous standards in using race to achieve diversity in college admissions.

With the critical 2014 elections looming, the divided court, in a 5-4 decision, eviscerated the 1965 Voting Rights Act, one of the most significant achievements of the civil rights era and the rule book under which elections have been operating for nearly a half century.

The court tossed out the formula that determines which jurisdictions require pre-clearance for changes in voting laws because of a history of past racial discrimination, in effect suspending Title 5 until Congress produces a new set of guidelines.

But don’t hold your breath. The conservative bloc of justices seemed to know exactly what it was doing when it passed the buck to Congress. Polarized and paralyzed, Congress appears simply not up to the task of devising a new formula, thus leaving the states to their own chicanery in coming elections.

Title 5 had been reauthorized by Congress four times, most recently in 2006 when it was extended for 25 years by a Senate vote of 98-0. The House approved the extension with only eight dissenting votes out of 435. And now, five members of the court decided that 535 members of Congress are profoundly full of it. They decreed that the old formula is no longer valid because so much racial progress has been made since the VRA was enacted.

Say what? Have they not heard of George Zimmerman and Paula Deen?

Within minutes after the court’s Title 5 decision, Texas’ secretary of state announced that he would enforce a new and strict voter ID law as well as authorize a new, controversial redistricting plan that gerrymanders the state heavily in favor of Republicans. Both plans had been blocked by the Justice Department.

In the 30 states where Republicans control either the state house or one or both houses of the legislature, systematic efforts to tamp down the minority vote are routine exercises in suppression. Florida, Pennsylvania and Ohio have been blocked by the Justice Department under Title 5 from making it difficult for minorities to vote.

Sixteen states now require photo IDs for voting while 34 states have non-photo requirements. In Indiana, eight nuns were prevented from voting because they lacked photo IDs, usually drivers’ licenses. Together, during the 2012 elections, the Justice Department monitored voting activities in 20 states for irregularities.

And Congressional and legislative gerrymandering continues unabridged, contorting all black districts into ink-blot shapes so that others can be bleached, usually with the quiet connivance of blacks and the courts. The partitioning of ebony and ivory districts is a major contributor to the partisan stalemate in the Republican-held House of Representatives.

Republicans excel at winning local elections but they can’t win nationally, so impoverished are their ranks. So the court has handed Republicans a hot potato. The key question the ruling raises is whether a deeply divided Congress can work together, as it has in the past, to replace the existing formula. Until the ruling, nine states – Alaska, Arizona, Texas, Alabama, Louisiana, Mississippi, Georgia, South Carolina and Virginia – required pre-clearance.

But in a narrower sense, the court’s ruling puts the nation’s 50 state houses on the spot as well. Republicans control 30 governorships and totally dominate 26 of the 30 state houses. Texas, Virginia and North Carolina have been trying to impose strict new voting laws as a way of suppressing the black vote. So the election mischief will no doubt continue, if the past is a guidepost to the future.

Gay marriage is a simpler issue. Striking down the Defense of Marriage Act (DOMA) was clearly a matter of applying equal justice. Virtually everyone that matters agreed that DOMA was unconstitutional. The court’s decision affirms that the justices follow public opinion as well as the dictates of law books. DOMA was enacted in the emotion of an earlier era but now was caught up in one of the most dramatic shifts of public attitudes in history. President Bill Clinton has admitted that he was wrong when he signed DOMA into law in 1996.

The court’s action extended full federal recognition to legally married gay couples, giving them the same benefits that heterosexual couples receive in the 12 states and the District of Columbia where gay marriage is legal. It stopped short, however, of applying those benefits to same-sex couples in the states where they live. But an eventual national expansion of those rights seems inevitable.

The court also turned down a case involving California’s ban on gay marriage, Proposition 8, for lack of standing. A federal judge ordered an immediate resumption Friday of gay marriages in California. Kris Perry and her partner, Sandy Stier, a plaintiff in the cases, were married at San Francisco’s City Hall.

Gay marriage is without question a matter of generational style and tolerance. Polls have consistently shown that public attitudes on the subject overall have evolved to a favorability rating in the low 50s over a 10-year period. But among the all-important demographic, the age group of 18-35, the approval rating has surged to 80 percent. The court moved with the swell of the times.

In his blistering dissent from the liberal majority overturning DOMA, Justice Antonin Scalia wrote: “What has preceded that assurance [that the opinion is applicable only where same-sex marriage is legal] is a lecture on how superior the majority’s moral judgment in favor of same-sex marriage is to the Congress’s hateful moral judgment against it. I promise you this: The only thing that will ‘confine’ the court’s holding is its sense of what it can get away with.”

And Justice Samuel A. Alito Jr. reportedly rolled his eyes and grimaced painfully (probably why the court does not allow cameras) when Justice Ruth Bader Ginsberg read her dissent from the bench on the Voting Rights Act: “When confronting the most constitutionally invidious form of discrimination, and the most fundamental right in our democratic system, Congress’ power to act is at its height.”

In other words, Supreme Court justices have political sensibilities and prejudices just like the rest of us despite the robes and the grandeur of the office.