The good, the bad, and the confusing. 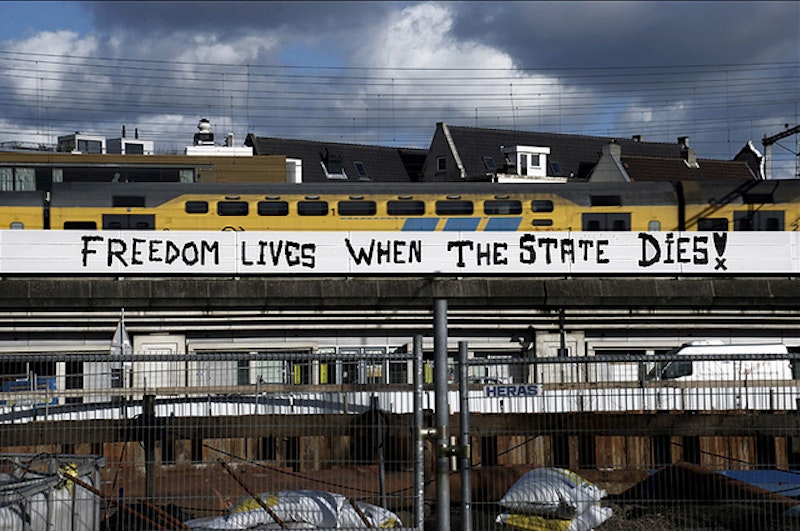 Richard Nixon declared a War on Drugs in 1971 that would eventually lead to flushing  $1 trillion in government spending down the toilet in the course of ruining countless lives. The streets never got cleaned up. The violent gang activity continued. Democrat Bill Clinton, having learned nothing from the past, spearheaded anti-drug policies that led to mass incarceration, especially among blacks. If libertarian ideas had dictated the nation's drug policy since the 1970s, all that wasted money and a lot of wrecked lives could’ve been salvaged.

You sometimes see libertarians disparaged as eccentrics—even wacky—by the type of Democrats who voted for Bill Clinton, but what could be wackier than how their president handled the nation's crack epidemic, with the support of black leaders in his own party? There was no empirical evidence his plan would ever work. The Libertarian Party’s 2016 presidential candidate, Gary Johnson, made some policy-related gaffes during his campaign that raised eyebrows, but nearly every Democratic voter and many Republicans would now be happier if he’d won. If libertarians are wacky, what does that make the major party that nominated Donald Trump, and continues to stand by him as he pollutes their own political ecosystem and compromises the party’s future.

The invasion of Iraq was perhaps the worst mistake the U.S. government has ever made, and once again we'd have been better served if the libertarians had been in charge. Democrats are too easily cowed into supporting a war by the thought that they'll appear weak on national security, but libertarians have no such qualms. It's good that there are libertarians fighting the government’s impulse to involve impose itself where it doesn't belong. Neither the Democrats nor the Republicans can be trusted with this crucial task, as they both have their particular blind spots when it comes to preserving personal liberty.

It's a good thing that Reason magazine exists, even though it's partially funded by the “evil” Koch brothers. Reason does a fine podcast with Matt Welch, Nick Gillespie, and Katherine Mangu-Ward, all of whom are witty, erudite intellectuals. Robby Soave, a writer for the magazine, has done a great job covering the disturbing results of the Obama administration’s interpretation of the Title IX law, a miscarriage of justice done out of “good intentions” that ended up denying men the most basic of legal protections. At Splice Today, resident libertarian Todd Seavey writes plenty of pieces that make all kinds of good points. Last, but not least, libertarians have good senses of humor, unlike, say, the dour Democrats.

Perhaps libertarians’ greatest contribution to society is their ability to apply rigor to logic and leave emotions out of policy decisions. They understand that well-meaning policies often have disastrous unintended consequences, and realize that often doing nothing is the best policy. Saddam Hussein was a monster to the Iraqi people, so getting rid of him must be a good idea. Drugs are harmful, so fighting them by imprisoning their users will certainly benefit society. But that’s not how things work, as intentions alone are meaningless. The only thing that counts is the ability to accomplish the stated objectives, something that's been overlooked constantly in the course of American political debate. We need libertarians. Human freedom is too easy to overlook, government has the infinite capacity to mess things up, and free markets yield massive benefits.

Where the libertarian orthodoxy becomes tricky for me is in the area of economics. Much of the thinking often seems stuck in that time when the U.S. was on a fixed-exchange rate under the gold standard. Indeed, libertarians are nostalgic for those times, as they have no use for the fiat currency, floating exchange-rate system currently in place. They're convinced that fiat currencies, having no inherent value and “printed” profligately, are destined to self-destruct. This partially explains the libertarian fondness of cryptocurrencies like Bitcoin, which exist in finite quantities, unlike the U.S. dollar.

So while it's unfortunate that libertarian ideas were ignored at certain critical points in American history, this wouldn’t pertain to the financial meltdown of 2007-8. Had the Democrats followed libertarian prescriptions and pursued the austerity path to financial recovery, the U.S. would’ve fallen into a massive depression. We’d have resembled Greece, which has suffered greatly under the EU’s imposed austerity regime. The libertarian idea of market deregulation—Alan Greenspan is a libertarian—is what led to the crash in the first place. Libertarians are convinced that if their ideas would just be tried, people would see how they work, but we're all lucky they weren’t tasked with dealing with the financial crash a decade ago as their first major test case. They're lucky too, as it would have effectively ended their movement.

Libertarians make the mistake of looking at the U.S. economy as they would a household economy. Deficit spending to them is like a couple deciding to fix their financial problems by becoming bank robbers instead of getting second jobs. But the couple is a currency user, and the U.S. government (not state and local governments) is a currency issuer, which libertarian thought doesn't account for. The federal government now collects taxes to regulate the economy and make the dollar valuable (it's needed to pay federal taxes), not to fund its spending as it did back in happier times for the free market enthusiasts. If you pay your taxes with cash, the government will shred the bills. It's money that's been removed from the economy.

Libertarians are worried that rampant inflation is coming any day now. They've been saying that for decades, but the national debt is over $20 trillion now and inflation still hasn't kicked in. That's because the U.S. has the resources to produce enough goods to keep up with the new dollars being added to the economy. When this is no longer the case, then inflation will set in, but the financial markets aren't anticipating it.

The mistake libertarians are making is thinking of the resources that keep the U.S. economy healthy as tax revenues, when the actual wealth of the nation is now measured in non-monetary things such as the skills and the size of the labor force and the technology available to produce needed goods and services. Whether or not this is the ideal system can be debated, but this is the current reality. It's also the case that the markets that libertarians lionize can sometimes be irrational and underestimate risk. For these reasons I'll continue to take the “à la carte” approach to libertarianism rather than order the prix fixe meal.