JFK to Trump: The Loss of Our Cosmic Vision

The wounding without the transformation. 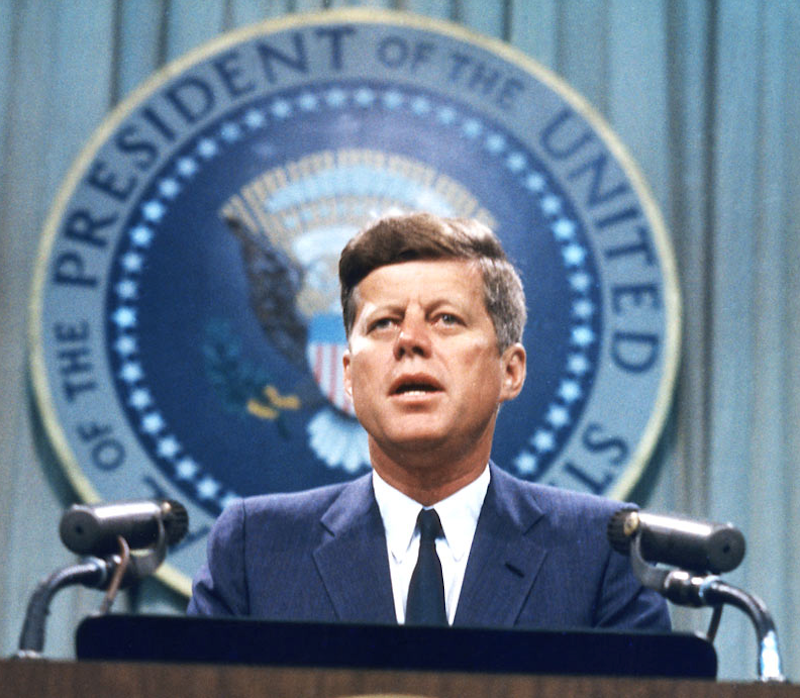 It was January 20, 2017, inauguration day, and I was sitting about 100 feet from Donald Trump, who was being sworn in as the 45th President of the United States.

Crammed into a small chair right under the west front of the Capitol, security was not going to allow me to move. I was glad to see Trump crush the Left. The liberalism that Trump had defeated had become intolerant and irritating—punitive, humorless, and fiscally irresponsible. Obsessed with race, gender, and microaggressions, it lacks a compelling vision that makes people think their lives have a greater purpose than the latest social justice cause.

Yet the conservatism that Trump represents also lacks a great vision. Swiss psychiatrist Carl Jung once noted how it’s essential for humans to feel their lives have great meaning. “That gives peace, when people feel they are living the symbolic life, that they are actors in the divine drama. That gives the only meaning to human life; everything else is banal… A career, producing of children, all are maya [illusions] compared with that one thing, that your life is meaningful.”

Trump has punched back to the bullying left and passed some good policy. But he hasn’t provided what John F. Kennedy had on the same spot more than 50 years earlier—a grand vision of man having a spiritual destiny.

In 1961, John F. Kennedy had been sworn in at the same spot. He was a more graceful man, even though revelations about his impulsive and abusive behavior towards women have damaged his image. “We dare not forget today that we are the heirs of that first revolution,” Kennedy said that day. “Let the word go forth from this time and place, to friend and foe alike, that the torch has been passed to a new generation of Americans—born in this century, tempered by war, disciplined by a hard and bitter peace, proud of our ancient heritage—and unwilling to witness or permit the slow undoing of those human rights to which this nation has always been committed, and to which we are committed today at home and around the world.”

In the absorbing book JFK and the Masculine Mystique: Sex and Power on the New Frontier, journalist Steven Watts argues that in the 1950s and '60s, Kennedy offered glamour, action, cosmic destiny, and poetry when American men were suffering from bureaucratic suffocation, bland suburban consumption, empty pop culture, and physical flabbiness. According to Watts, in the 1950s American men were feeling trapped between the suffocating bureaucracies that had sprung up after World War II and the enervating domestic drudgery of the crabgrass frontier, as well as the physical torpor brought on by the convenience of modern cars and technology.

Then appeared Kennedy, a handsome, charismatic man of bold vision and physical vigor. Kennedy had movie star looks, education, charm, and what appeared to be physical grace (although later years revealed this was a bit of a sham, as Kennedy had a bad back and was often medicated). A war hero, Kennedy was well-spoken and had appreciation of the arts.

According to psychologist James Hollis, male wounding, which until modern times was part of initiating boys into manhood all over the world, leads to humility, responsibility, and compassion, as well as a larger spiritual vision about the meaning of life, and Kennedy had been wounded in war. Women went crazy when he drove by—the media called Kennedy’s groupies “jumpers” because they jumped up and down. When Kennedy died, Watt notes, American men as well as American women felt widowed.

Trump, has none of Kennedy’s sex appeal, grace, or larger vision. Popular Internet activists like Gavin McInnes, Milo Yiannopoulos, and Mark Dice shiv the silliness of the left with verve and precision, but their attacks too often spill into the ugly and abusive. Yiannopoulos often compares feminism to cancer. Conservative scold Ben Shapiro has expressed doubts about Trump, but his cold, adenoidal delivery makes him sound like the Organization Man of the 1950s that Kennedy was the antidote to.

Unlike Trump, Kennedy had come close to death several times, including the harrowing PT-109 rescue in the Pacific during World War II, which is explored with gripping detail in JFK and the Masculine Mystique. Plagued by health issues his entire life, Kennedy had wounds that made him, as Watts puts it, “feel death constantly at his back.” These wounds gave Kennedy a grounding that transformed him into a thoughtful leader. With today’s video games, YouTube warriors, and Twitter generals, we have what Hollis calls “the wounding without the transformation.”

As the enticements of the quiet suburbs, Doris Day, and the corporate Organization Man left men wanting more in the 1950s, our modern digital gadgets, angry Twitter rants, political mud fights, and popular culture have no power to fully satisfy the male and female soul. It’s why a year after Inauguration Day, I both thank God that Trump has fortified America against the left and feel that something deeper is missing.