A recent column in The National fails to make one valid critique. 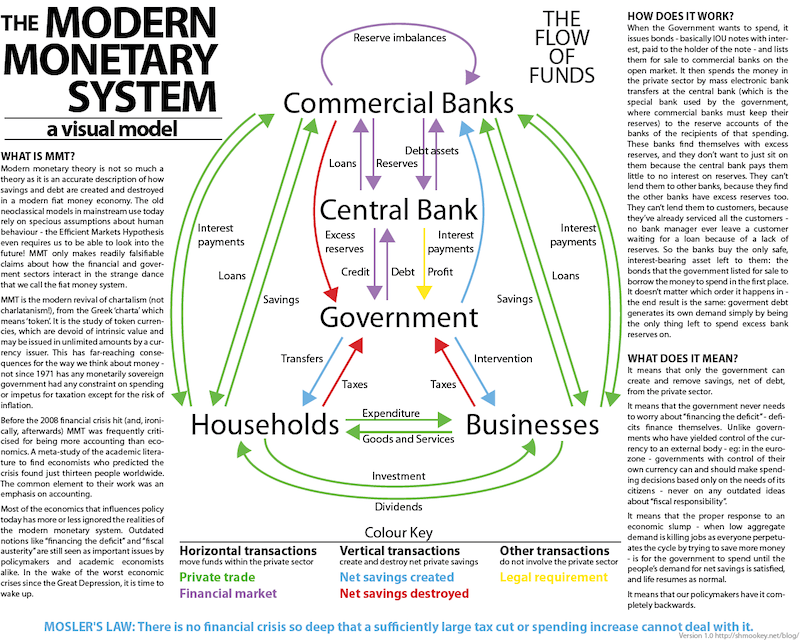 Modern Monetary Theory (MMT), which strives to explain macroeconomics in nations with sovereign, fiat currencies, represents a radical departure from conventional wisdom, making it a lightning rod for criticism. After spotting the headline in The National—“Hot new economic theory is just one piece of the puzzle”—I had some hope that Gordon MacIntyre-Kemp’s analysis would be rigorous and perhaps thought-provoking. My optimism was crushed just a couple of dozen words in, and the cringes lasted right through to the end.

MacIntyre-Kemp frames his argument: “MMT promises an end to austerity with the ability to pay for any social policy, infrastructure investment or deficit cancellation without the need to raise taxes. It sounds too good to be true—and guess what, it is.” Except that it is true. The U.S. government, which can produce dollars with a few keystrokes, doesn’t need tax revenues to pay for anything. When it taxes, it removes dollars from the economy rather than filling the coffers of the U.S. Treasury. Still, MMT people don’t say, as the author suggests, that there’s no limit on government spending, although this is the most common misunderstanding of the theory. The limit’s a function of available resources—an economy’s more than just money. An economy can only absorb so much government spending before it reaches its “speed limit,” which is inflation. Serious inflation becomes a threat when the economy approaches full capacity, meaning almost everyone has a job, factory production’s maxed out, etc., not because of the deficit. Under MMT, government deficits are seen as surpluses for the citizens. In fact, the amount of the deficit matches private savings to the penny. This doesn’t mean, however, that MMT people think deficits can’t be too high. They also believe they can be too low.

The author warns, “Firstly, if a government can spend what it wants there is no restriction on unhinged leaders spending in a way that kills the planet.” The U.S. national debt’s at around $21 trillion now, indicating that the government’s spending as much as it wants to. MacIntyre-Kemp really goes off the rails here, imagining an MMT-driven scenario where “Trump could build that wall without the need for a deeply damaging government shutdown… [but] a building project of that size would significantly increase the carbon output of the USA at a time when it needs to radically reduce it.” Apparently the writer—who’s Scottish and lives in Scotland—believes that if the government operated under the principles of MMT, Trump wouldn’t need congressional approval for the funding of his wall. MMT’s only a macroeconomic theory. It doesn’t confer special powers on national leaders.

MMT has the writer’s imagination running wild with apocalyptic visions. He speculates that a socialist populist could use it to “cut income tax but maintain business tax,” and that this could cause the economy to fail. Perhaps he’s unaware that the current system’s abused every day. What caused the 2007-8 financial failure that almost no conventional economist foresaw? George W. Bush wasted $2 trillion on the Iraq War without any MMT. Anyway, whether or not the despotic leader MacIntyre-Kemp’s concerned about could abuse MMT has no bearing on the factual nature of its claims—they’re either valid or invalid. What he’s saying is the equivalent of someone claiming that Einstein was wrong because his theories could lead to a nuclear bombing.

MacIntyre-Kemp incorrectly believes that MMT “means no limit on military spending and effectively guarantees a new global arms race.” He’s hyperventilating with the simplistic guarantee of an arms race. MMT economists don’t claim that governments with sovereign currencies have unlimited military spending ability. Let’s say a military initiative called for the major ramping up of production of an item, but that the factories producing that item are already at full capacity. That means the only way you could purchase it would be to pay more than the going rate, which is inflationary, as would be the hiring of hundreds of thousands of workers for a military project. No knowledgeable proponents of MMT would justify such spending.

Continuing his fantasy, MacIntyre-Kemp claims that if a government used MMT to replace taxation, then the value of its currency would sink. But MMT explicitly states that it’s taxation that gives the dollar much of its value by creating demand for it. People need dollars to pay their taxes. Therefore, MMT could never be used to justify replacing taxation, just as capitalism couldn’t be used to justify the government owning the means of production. You shouldn’t be writing about MMT if you don’t know this basic tenet of the theory.

This article reads like an extended fever dream from a writer who hasn’t done his homework. I’m surprised he didn’t go into the usual nonsense about how MMT would produce hyperinflation like that in Venezuela and Zimbabwe, which were supply-side driven, not products of government overspending as so many conservatives will assure you. I assume that he arrived at his conclusions based simply on other flawed critiques of MMT, because there’s no way someone who’d done actual research would blather on like this.