He’s not the presidential candidate the Democrats want or need. 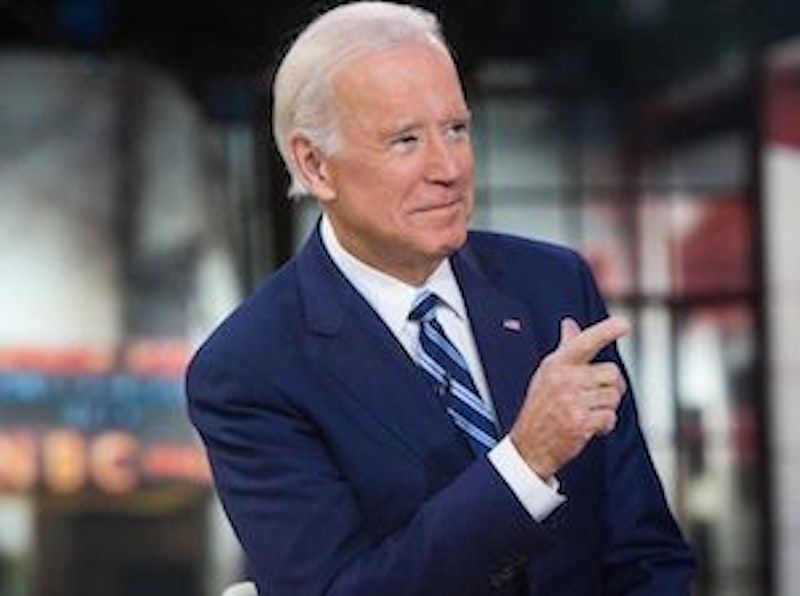 Joe Biden first ran for president in 1987. He’s run for that office ever since. The Democratic Party has rejected him again and again.

As a presidential candidate, Biden's always had trouble with the "Why this guy?" problem. His positions and experience make him a qualified mainstream Democratic contender. But he's not an inspired speaker or rhetorician—which was perhaps the root of his bizarre decision to plagiarize other's speeches, leading to a scandal that sunk his first presidential bid.

Nor has Biden ever offered visionary or groundbreaking policies. Even now, with 2020 presidential contenders jockeying for signature issues—cannabis legalization, universal basic income, a job's guarantee, the Green New Deal, taking on Wall Street—Biden's policy shop is quiet. He has good name recognition thanks to his Vice Presidential tenure, but it's hard to pin down what he stands for. He hasn't even endorsed Medicare for All, a commitment to universal health care pushed hard by Bernie Sanders and embraced by virtually every other high profile 2020 contender.

Biden also has a history of bad political and moral judgments. The plagiarism scandal speaks poorly of his character. But the real blot on his record are the Clarence Thomas nomination hearings in 1991. Biden was the Chairman of the Senate Judiciary Committee at the time. But instead of taking accusations of sexual harassment by Anita Hill against Thomas seriously, he let Republicans on the committee smear her, and then refused to call corroborating witnesses. Biden has expressed regrets for his actions, but still hasn't apologized to her personally or directly.

The main argument for Biden is that he could challenge Trump among working-class white voters. But Democratic candidates across the country were successful in 2018. The truth is that if Trump's approval is in the low 40s as it is now, virtually any qualified Democrat can beat him. Biden's polling numbers aren't that strong; they seem to reflect wide name recognition, not some sort of overwhelming electoral popularity.

Biden isn't advancing progressive policies; he doesn't understand why defending sexual harassment victims is a political necessity. He's out of step with a party that elected record numbers of women, and was nationally galvanized by dynamic young candidates like Beto O'Rourke, Stacey Abrams, and Alexandria Ocasio-Cortez.

Biden underlined how out-of-touch he was last January, when he launched into a crotchety attack on young people concerned about economic hardship and the cruel, racist Trump presidency. "The younger generation now tells me how tough things are. Give me a break. No, no, I have no empathy for it. Give me a break. Because here’s the deal guys, we decided we were gonna change the world. And we did." It's a remarkably tone-deaf line. Especially considering that one way in which the Baby Boomers changed the world was by pumping massive amounts of carbon dioxide into the atmosphere, creating a global warming crisis that will affect young people long after Biden is dead.

Biden was a good vice-president. His long service in the Senate meant that he'd be ready if needed to step into office in an emergency, and his enthusiasm, affection, and obvious rapport for a popular president resulted in much (deserved) good will. It's hard not to be moved by the video of him tearing up when Obama gave him the Presidential Medal of Freedom. Biden's response was gracious: "I don't deserve this. But I know it came from the president's heart."

Just because some Democrats (including me) have affection for Biden doesn't mean we want him to be the nominee. Biden would like to believe that his time has finally come. But it shouldn't. Democratic voters were right all along; Biden is an uninspiring candidate. Democrats have numerous better choices. It's time for Joe to hang it up.