This is the Era of the Forced Apology 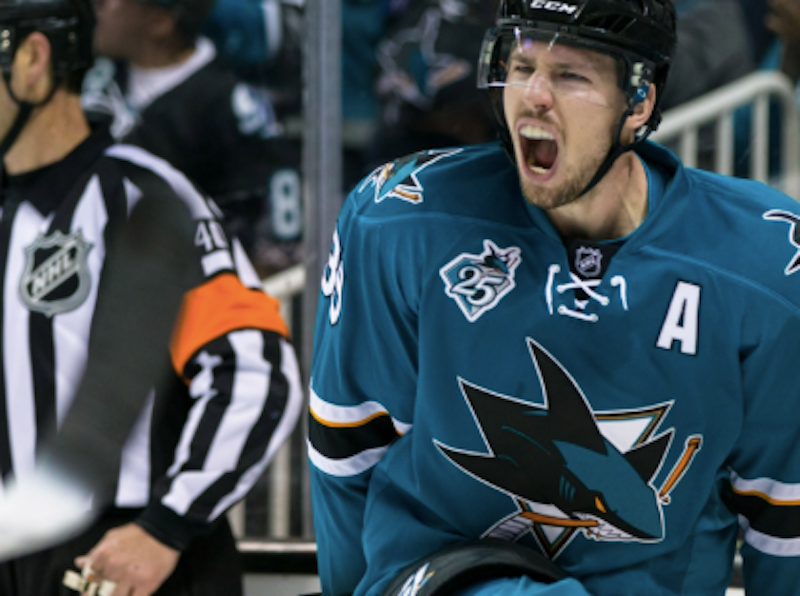 Logan Couture is the captain of the National Hockey League's San Jose Sharks. Last week, he tweeted about talking in Toronto about voting for the Republican party if he could—he's Canadian—and "mentioning Donald Trump by name.” Sharing this opinion, he claimed, got him sucker punched. "Is this what we're coming to? If you vote, you're a villain?"

Couture would soon find out exactly what we're coming to. He got himself cast as the villain for revealing his approval of Trump, even though he'd already taken a punch for it, allegedly. His inevitable apology followed, because that's how it works today. “I regret the decision to make this incident public," said Couture on Twitter, adding the standard "taken out of context" defense. "I did not do a good job of communicating my thoughts earlier today," the 11-year NHL veteran continued. In fact, he'd communicated his thoughts precisely. It's just that, as he'd discover, they were thoughts he wasn’t allowed to express.

The reaction from Adam Proteau, hockey writer for the Toronto Star, was typical. He tweeted that Couture shouldn't have been punched but if you publicly voice your support for Trump, "don't be surprised when people let you know, in stark terms, what they think of you." In other words, it was kind of okay to punch Couture for liking the elected American president.

Couture said he doesn't support Trump, even though he'd just tweeted that he did support Trump. That's quite a political turnaround in a matter of hours, but in this era of public shaming you sometimes do what you have to do to call the hounds off. Couture had failed to read the tenor of the times, and he paid the usual price—a forced apology. New Orleans Saints quarterback Drew Brees made a similar error back in June when asked for his opinion about players kneeling to protest police brutality once the NFL season begins. The conservative Christian replied that he would "never agree with anybody disrespecting the flag," and then all hell broke loose. In the aftermath of the George Floyd killing, pro athletes can’t get away with clinging to this belief. In the current hypersensitive environment, Brees' comment is sufficient to label him a "racist," an accusation that can destroy a public figure.

It should be noted that athletes taking a knee for the national anthem have no intention of disrespecting the flag or those who serve in the military, which is something that Brees, as an NFL quarterback―the team leader―with mostly black teammates, should have figured out long ago. He could’ve easily avoided this stain on his reputation.

LeBron James and Brees' teammate Michael Thomas went after the future Hall of Famer, and the situation mushroomed. There were burnings of Brees' jersey, threats to boycott the Saints for life, and photoshopped photos circulated of the football star in a KKK robe. Brees quickly offered an apology, saying that his remarks lacked "awareness and any type of compassion or empathy." But the quarterback took flack for not going far enough, so he made a second apology with a video he posted to Instagram. "I should do less talking and more listening," said Brees, adding that he wants to be an "ally." His language suggested that he'd been coached by a professional familiar with the lingo of intersectionality. For added measure, Brees' wife then added her own Instagram apology, saying, "It's our job to educate ourselves. We are sorry." When you make $25 million per year to throw a football in a majority black city that's turned against you, you apologize until most of the noise has died down; then you do a little more. Look for Brees to make an announcement soon on his new, BLM-aligned initiative.

When Halle Berry announced in July that she was thinking of playing a transgender character, it appeared that she'd never heard about already happened to Scarlett Johansson in 2018 when she’d agreed to take a similar role. While Jared Leto, Jeffrey Tambor, and Felicity Huffman had all played transgender characters by that time, Johansson soon discovered that those days were gone. While she was initially defiant, the actress eventually relented, saying that she'd been "uneducated" about how transgender actors feel about "cis" actors taking jobs away from them. Berry knew better than to fight; she apologized right away for even considering taking the part, and for using the wrong pronouns to describe the character.

"I am grateful for the guidance and critical conversation over the past few days," said Berry, "and I will continue to listen, educate and learn from this mistake." She vowed to be an "ally." Speaking about being an ally and grateful to the people who educated you is now part of the boilerplate language of the forced apology.

Early in August, actor Ryan Reynolds suddenly felt the need to apologize for his 2012 wedding to actress Blake Lively. His offense was that it was held at a former slave plantation in South Carolina. Not a great idea, but it was eight years ago. Perhaps Reynolds understood that as a celebrity he's now under the microscope and wanted to get ahead of the story. The couple released a PR-tinged statement discussing their shame about being uninformed about "deeply rooted systemic racism" and their desire to educate themselves about other people's experiences.

In 1937, John Steinbeck set the standard for the kind of apologies we're now seeing. Tortilla Flat, his novel about carefree "paisanos" in California who love to drink, dance, and loaf around, had received criticism for being an insensitive portrayal of Hispanics. A contrite Steinbeck wrote this in the introduction of the reprint of the novel: "Had I known that these stories and these people would be considered quaint, I think I never should have written them. If I have done them harm by telling a few of their stories I am sorry. It will never happen again."

Steinbeck obviously wrote that himself, and it rings true. He felt affection for the paisanos, but hadn't considered that some might feel he was stereotyping them. These current forced apologies, however, are too coached and calculated to make the same impression of sincerity. But we live in a time when you have to apologize for revealing that someone punched you for liking Trump. In such an environment, when a single misstep can get you canceled, maybe you need to get the PR people involved when you've stepped in it. Your own words may not be sufficient to get you out of the jam.