The DNC and RNC have become memorials for their true believers, refusing to acknowledge or cater to anyone else. 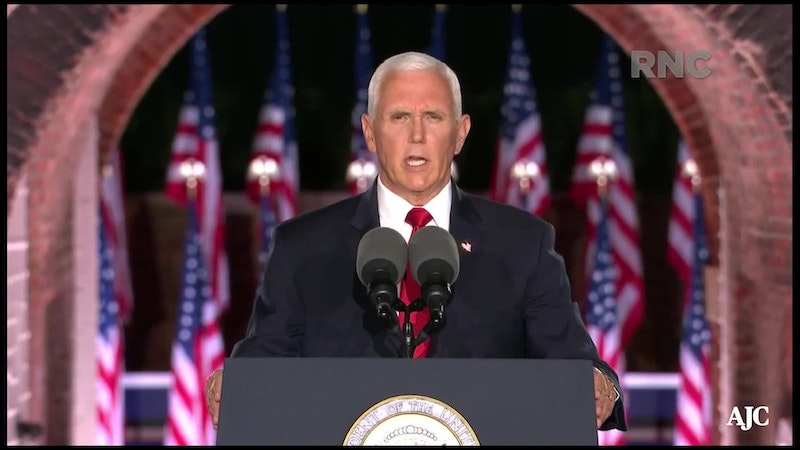 As the pandemic drags on, colored by fires, hurricanes, racial violence, unemployment, mass evictions, and political spite, certain themes now dominate American discourse. Three of the most prominent are if we simply elect Biden, we’ll be able to get back to a semblance of pre-2016 normalcy; Trump’s the only one standing between social order and pandemonium wrought by unwashed hordes trying to torch the country; and none of it matters because we’re doomed forever, since Covid has ruined everything.

All three are hyperbolic emotional distortions containing, at best, one part fact to three parts dread. We may suspect this is because such themes are defined and exacerbated by a hot-take media in love with overheated narrative at the expense of objective reportage. But anyone who reads the news or spends more than five minutes on social media knows this already.

Unfortunately, critical thinking has disappeared, leaving a vacuum for doomsaying and partisan fear-porn, which gets worse in a time of remote political conventions that play like poorly-designed advertisements. We could’ve blamed Zoom if we hadn’t dutifully sat down with a tumbler of Pepto to watch the corpse parade.

The DNC and RNC have become memorializations of what each party’s committed voters already think, far less about swing and far more about base. The smart and the cynical might say, well, that’s what national conventions have always been. But let’s have a moment of idealism. Every four years, we hope that the conventions, like the debates, show us something new, something we can believe in, something that might offer us more than the same partisan boilerplate we’ve digested since the primaries. The remote medium has revealed the true nature of the conventions: political posturing for the walking dead, nothing new, everything rotten, much of it dumb and depressing.

As the RNC shambles back into its mausoleum, we may wonder what the ritual sought to achieve. Nicholas Sandmann emphasized the irresponsibility of the menacing “war machine” media. The McCloskeys reiterated that the Eternal Suburbs are threatened by pillaging Visigoths and only Trump standeth firm. Sen. Marsha Blackburn accused Democrats of wanting to “cancel our heroes.” And the FLOTUS proved she’s capable of delivering a semi-coherent, un-plagiarized speech while dressed like Fidel Castro, her most recent accomplishment being transforming the Rose Garden into a bowling green.

The DNC was no better, not quite as well-produced, just as nauseatingly vapid, and obsessed with Why We Must Stop Donald Trump. Both conventions gave off a certain corpse stench. As Joan Walsh admits, in “Why I Can’t Watch the RNC,” “I tried to watch Tuesday night, but its cynical manipulation was even worse than Tuesday’s apocalyptic screeching… So I’m not going to watch Wednesday night, either. I can’t. I have reached some limit—my psyche can’t take in any more lies. I recoil, morally and physically.”

It’s slightly interesting that, post-DNC, Biden is “conservative,” in the strictest meaning of the word, promising Democrats a return to Obama-era confidence. Trump’s now “progressive” in the sense that, as the incumbent, he can’t argue the merits of his dysfunctional first term. Instead, he has to look forward to the “American carnage” under his opponent: “You may not like me, but you’re going to rue the day you voted for Biden when he lets the Huns through the city gates”; though, après moi, le déluge hasn’t been a compelling political statement since 1757, Nixonian rhetoric notwithstanding.

It’s fairly clear that Biden, if elected—something I earlier thought was a given but am now not so certain about—is going to inherit the blame for much of what we’re enduring now. And we won’t feel sorry for him. We’re not rewinding the clock to Obama’s false golden age, even if we’re myopic and deluded enough to believe in it. As repugnant as cancel culture and identity politics may be, especially on social media, we’re not going to revert to a state of nature from outbreaks of looting and Robin DiAngelo’s specious doctrines—no matter how many troops the President deploys. And Covid hasn’t doomed us forever. It’s put us into a position where we have to enact broad national changes—just like New York City has done, time and again, reinventing itself and bringing back talent and energy in the process.

Jerry Seinfeld’s recent harsh, yet funny, riposte, “So You Think New York Is ‘Dead’,” to James Altucher’s mournful doom-stricken eulogy for New York City resonated, to some extent, with all three of these ill-conceived themes: “Wipe your tears, wipe your butt and pull it together… You think Rome is going away too? London? Tokyo? The East Village? They’re not. They change. They mutate. They re-form. Because greatness is rare. And the true greatness that is New York City is beyond rare.” In his brief op-ed, Seinfeld delivers more punch, more substance, and surprisingly more optimism than both of the national conventions. This country is mutating too fast to accommodate the old tribal fears and the old partisan arguments.

After watching both the DNC’s and the RNC’s danses macabre, neither party’s vision of the future is useful, healthy, or persuasive. Neither party is going to make America great again, even if they deliver on their overblown convention promises. Only the American people can do that, only if they can summon the collective will to make a comeback. But first the country has to wipe its tears away, quit worshipping things already dead and buried, and embrace that which is new, emergent, and alive.