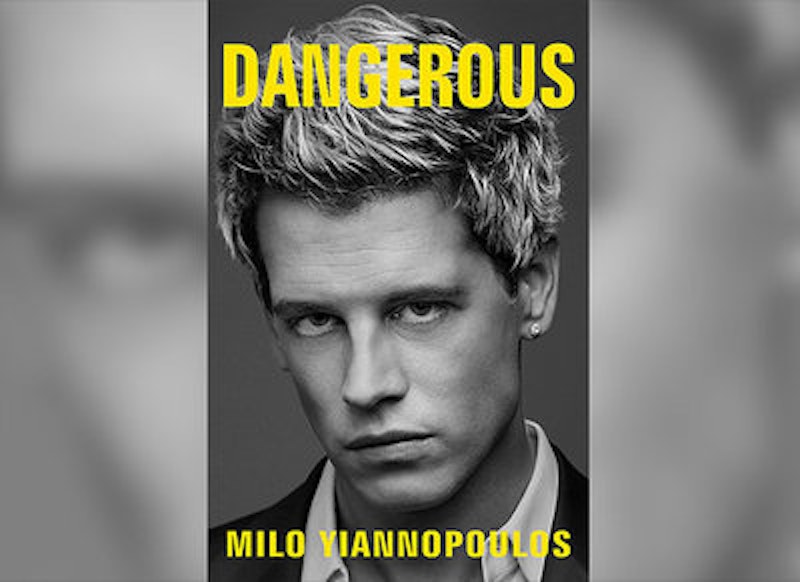 Milo Yiannopoulos lost his book deal, his job at Breitbart, and a prestigious speaking job at CPAC all within the space of 48 hours. His fall concerned statements he made on YouTube about consensual sex between 13-year-old boys and adult men and women. His statement that 13-year-old boys could consent to sex with men found him immediately denounced by the liberal, anti-fascist, anti-Trump Left (who looked for any excuse to silence him), but also, this time, by the Conservative right, and at least 12 employees of Breitbart threatened to walk unless he was fired.

He’d already been de-verified on Twitter and then banned altogether for sending abuse to Lesley Jones, the black star of the female reboot of Ghostbusters. He wrote an anti-feminist review of the film, one that “triggered” a massive reaction from many women’s groups, and then called Jones “a black dude” in a tweet. Twitter’s official reason for the lifetime ban was that Yiannopoulos was “inciting or engaging in the targeted abuse or harassment of others.” He had hundreds of thousands of followers on Twitter (which increased by tens of thousands after he was de-verified), and remains a cause celebre on Facebook and Instagram with hundreds of thousands of devoted fans, delighting in his self-styled reputation as the “most fabulous supervillain on the Internet.”

Feminist writer Laurie Penny (who had followed and reported on Yiannopoulos’ college tours and was present at the Berkeley antifa riots) wrote: “This was never, in fact, about free speech at all. It was about making it OK to say racist, sexist, transphobic, and xenophobic things, about tolerating the public expression of those views right up to the point where it becomes financially unwise to do so.”

Or, to put it more directly and in the words of anti-fascists Hart Eagleburger and Jack Rusk: “Shutting down fascists and racists is not a conflict about free speech but the means for organizing politically… Why should the far left defend freedom of speech when it is a principle so often denied to it, specifically for political reasons?”

Whether or not you agree with this statement, or these authors’ description of Yiannopoulos as a “far right extremist,” it’s obvious that the hard-left are at war with free speech, and the very existence of his autobiography Dangerous filled them with anger. Corporations like Twitter and Facebook have the right to dictate rules for speech on their platforms, but silencing “hate speech” (an ambiguous term at best) simply pushes the extreme viewpoints underground. “Hate Speech” is such an ill-defined term that it threatens to include any perspective that does not agree with the politically correct status quo. Any conservative voice, no matter how moderate, is in danger of being censored.

I’m from London, but wouldn’t have voted for Trump, and Brexit makes me uneasy, but I was a little devastated to find that Yiannopoulos’ book wouldn’t be released. I found the furor that surrounded it to be inexplicable: the Chicago Review of Books refusing to review any Simon & Schuster books for the entirety of 2017; liberal celebrities like Judd Apatow and Sarah Silverman endorsing a boycott: author Roxanne Gay withdrawing her books from Simon & Schuster; and the riots that followed. Before they pulled the book, it was comfortably sitting at number one on Amazon in pre-sales, destined to be a commercial blockbuster.

Which makes the shelving of his book that much more frustrating. As Mick Hume writes in Trigger Warning: Is the Fear of Being Offensive Killing Free Speech?, “The lesson of history is that defending free speech means standing up for the rights of heretics, no matter what we might think of them or how hard that might seem in the here and now.”

Was Yiannopoulos’ book going to be a ground-breaking masterpiece? All evidence points to the contrary. He’s an Internet star, a master of the meme and the short information burst. While he can be witty and engaging on stage, would this necessarily translate into good prose? I’ve never read anything by him that stood out as strikingly well-written, and it was his meteoric fame and his controversial status that landed him the deal in the first place. Surely the only real way to defeat a bad idea is with a good idea, and Simon & Schuster succumbing to left-wing pressure it feels very much like a pyrrhic victory. What harm would the book have done? It would’ve given left-wing writers something to debate, rebut, and critique. The notion that people are too dim-witted to make their own minds up about something, that they would be immediately brainwashed by a supposed “extremist” viewpoint is patronizing.

Yiannopoulos recently announced he’d self-publish his memoir Dangerous, and will be suing Simon & Schuster for backing out of the deal. His imprint, Dangerous Books, will be a place where “authors who can’t find a voice” can see their work in print. A source said: “Simon & Schuster has more leftist rules than Facebook and censored his book to hell, but Dangerous Books is a free speech platform.”

I’ll buy Dangerous as soon as it’s released. I doubt I’ll love it, but I believe in the age of Trump and Brexit it’ll be an important book. A far-right manifesto can be useful to the left, if only to explain to them what they are up against.