Then they came for speech. 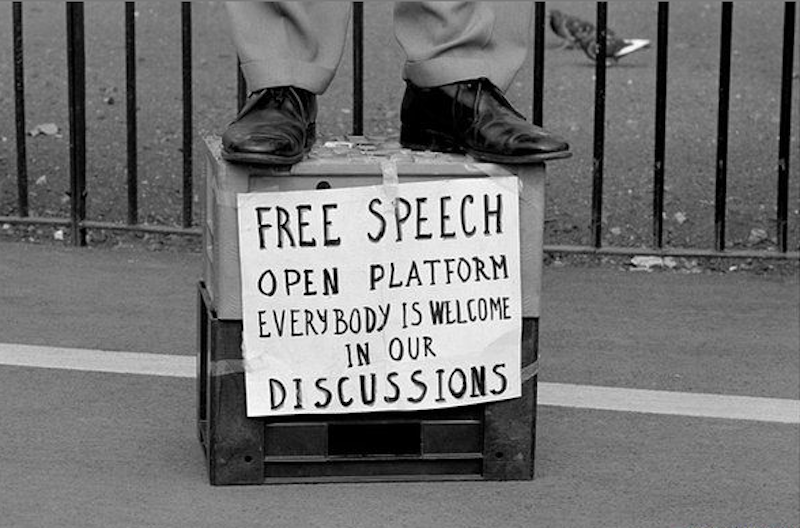 One of the most frustrating things about the recent censorious trend among sensitive politicized youth is that it renders useless my last-ditch political metaphor. I always figured if the day came that all other arguments for liberty were failing—if no one wanted to hear about free trade or gun rights or religious liberty—I could always fall back on the concept of free speech.

I don’t just mean that if you think speech should be free you logically must think all non-violent human action should be free (though I do). The free speech analogy, while it lasted, was also useful for defusing the bogus argument that “You must be in favor of X because you are willing to permit X.” People are quick to assume libertarians want people to be poor if they’re unwilling to have the government intervene against poverty, for example, and quick to assume libertarians are racists if they’d tolerate a racist business—but you used to be able to respond, “Well, I think lesbian Satanist pornography should be legal, but that doesn’t mean I’m a lesbian or a Satanist or that everyone must consume such material.” I even want anti-vaccine crazies to have their say.

But increasingly, the young folk on campus seem to think (as totalitarians do) that all the things you like should be legal and all the things you dislike should be illegal. I always sort of took it for granted that the fairly simple idea that free speech is good was one that resonated for most Americans across the political spectrum. I’m not so sure anymore. And for the ignorant young, the idea that “Someone might get offended” isn’t just a trump card—it’s also one that has powerful novelty value for them, as though no prior generations had ever stopped to think that someone’s feeling might get hurt. They thought of that, I promise you.

Some on the left are becoming so, well, reactionary they’ll throw any classically-liberal value under the bus if doing so aids a perceived outsider/other. You know darn well if you really listen to them that many prefer radical Islam to free speech, for instance, for the knee-jerk reason that radical Islam is against us at the moment. If Republicans were on a big anti-serial-killer kick, as night follows day, Salon would write a defense of serial killers, possibly even eroticize the self-sacrificial gesture of being killed by one.

Over in Glasgow, where speech is even less free, recently the cops notoriously warned people who are tempted to post offensive things online to “THINK” by asking themselves whether a post is “True, Hurtful, Illegal, Necessary, or Kind” (I assume it’s not supposed to be all of those at the same time, which would be tricky). I don’t like being a jerk just for the sake of being a jerk, but the proper response may be to urge Scots to “TROLL”: Tweak, Resist, Overthrow, Laugh, Liberate.

Tonight at nine p.m. on Fox Business Network, by the way, John Stossel hosts the second half of a debate between the three leading Libertarian Party presidential contenders, and I hope that event, at least, will be like a glimpse of a world where people still get the gist of freedom.