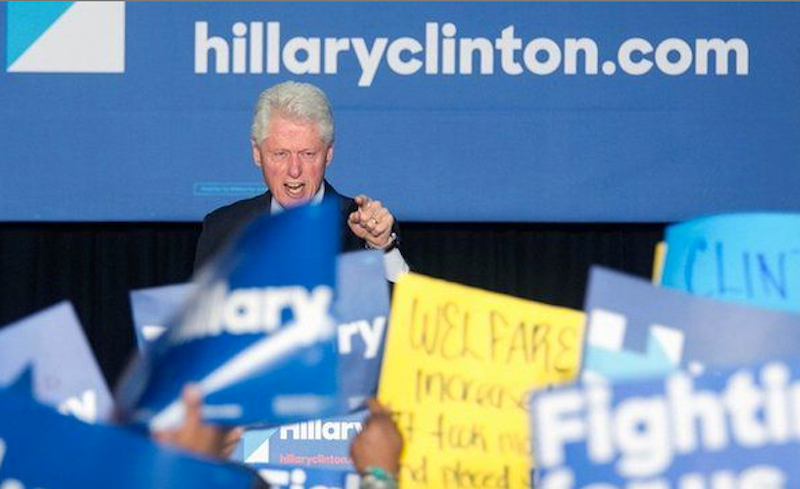 At a rally in Philadelphia Thursday, former President Bill Clinton drew national attention and derision for his response to a heckler who attacked him for crime politics during his presidency. I was there—standing right next to the protesters for the majority of the afternoon—and here’s what happened.

The event, ahead of the April 26 Pennsylvania primary, took place at a recreation center in the West Mt. Airy section of the city, which multiple politicians from the stage credited Clinton (along with themselves) for having helped build in the 1990s. Clinton arrived about 90 minutes late, and then took the stage for a roughly 30-minute speech in which he praised his own presidency, his wife, and Villanova’s basketball team, while urging the crowd to get out the vote for Hillary.

While it may have looked on TV like Clinton was fighting the whole room, there were only two protesters, a middle-aged African-American woman, identified in multiple news accounts as Erica Mines, and her male companion, identified as Rufus Farmer. I was standing near them for the entire hour-and-a-half before the ex-president arrived, and I had the sense they were planning something, since I could tell the two of them were holding signs and Mines made multiple vocal comments. At one point before the rally, when organizers tried to bring a group of children up to the front, she refused, stating that Clinton had called children super-predators so she wasn’t about to let them use some as props. (Others objected to the kids stepping up, not out of political conviction but rather because they had been waiting a long time and didn’t want to move back, and the plan was quickly abandoned.)

When Clinton arrived and the speech started, the two protesters first silently held up signs, with such messages as “Hillary is a murderer” and “Clinton Crime Bill Destroyed Our Communities.” During the silent protest, various individual staffers and security personnel asked the two to take down their signs, but they refused. Eventually, Clinton supporters tried to block those signs with Hillary signs. They may have tried to physically take the signs away—Mines said so in later TV interviews—but I didn’t see that happen.

At various times spectators, including one older white woman who was on the verge of tears, walked up to Mines in order to “reason” with her. After awhile, Mines decided to confront Clinton directly. Here’s the video of the confrontation, which went viral practically before the event was over:

Clinton’s response—in which he mostly defended his own crime bill and record and used such no-no words as “hush”—was reported as a huge gaffe for Clinton and off-message for his wife’s campaign. This may be true from a campaign standpoint, although I can say the room was probably 95 percent on Clinton’s side, and it was a majority-black crowd, albeit a self-selecting group who chose to attend a Clinton rally.

Eventually, after multiple attempts, security, staffers and at least one Philadelphia police officer formed a line and slowly nudged the two of them towards the back of the room. Then, as soon as the speech was over, almost every reporter and TV camera in the room headed straight for Mines and Farmer.

A few observations. This strikes me as an effective protest, successful civil disobedience that achieved its practical objective. Mines and Farmer showed up, made their statement, stood their ground, and as a result, we’re talking about their message and not Clinton’s. Her cause led the evening news and had a possible actual impact on the campaign—even if the room was almost entirely on Clinton’s side.

Also, Mines and Farmer were not arrested, dragged off by their hair, called racial slurs, or punched in the face, nor did the politician on stage egg on violence against them, which is more than I can say for what happens to African-American protesters at Donald Trump’s rallies.