Donald Trump’s Silent Majority Is Neither Silent, Nor a Majority.

Will the alt-right come to Trump’s rescue? 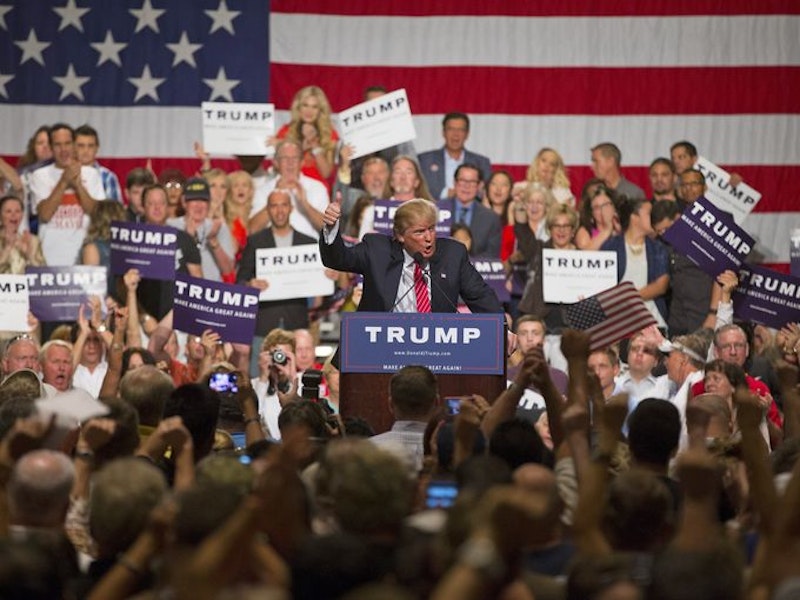 When Donald Trump, early in his run for president, referred to his supporters as the “silent majority,” it wasn’t surprising. Sure, it recalls the days of Richard Nixon, who first used it in 1969 during his first term. Yet the phrase, and the politics it represents, has periodically resurfaced in the decades since.

That Trump is obviously not a student of political history and likely isn’t aware of the Nixonian connotation—he said, “nobody remembers that” when reminded by The Washington Post’s Robert Costa last July—is relatively immaterial. Trump’s appeal, to the disaffected, struggling, the white and the male, fits that sort of rhetoric perfectly.

There’s just one problem for Trump and his presidential hopes: the “silent majority” of his base isn’t a majority, and it’s not silent, either.

It’s my experience that the sort of people who favor building a wall, deporting Muslims and insulting coddled young people aren’t silent at all—in fact, they’re loudly vocal. They never shut up. Trump’s popularity is based largely on flouting of political correctness, and people who hate political correctness aren’t quiet about doing so. There aren’t a lot of closet Trump fans—people who support him are rather loud.

The politics of the “silent majority” implies that everyone associated with it was afraid to admit how they really felt, up until just this minute. But I also heard the same argument when Pat Buchanan ran for president, when the Gingrich Republicans took over in Washington, throughout the Bush era and all the way through the Obama-era rises of Sarah Palin, the Tea Party and Glenn Beck. That’s a lot of political awakenings in a relatively short period of time.

But the “silent” part is even less true than the “majority” one. That’s because Trump’s supporters, according to just about every general election poll taken thus far in the cycle, are not a majority, or even close to one. At best, they’re a plurality of the Republican Party. And all the Republican rhetoric in the world about their constituencies representing “real Americans” won’t be enough to overcome those numbers.

Trump has a cult following—a loud and passionate base of people who love it when he calls Mexicans rapists, viciously insults his opponents, stands by his campaign manager after his goon-like grabbing of a female reporter, and all of the other things that horrify the mainstream media. But the majority of America is opposed to this stuff, if not outright disgusted.

Then there’s the demographics of the electorate, which have changed dramatically since Nixon’s time and not in a way that favors Trump. Politico concluded last month that to win a majority, Trump would need to win 70 percent of the white male vote—something not even Reagan ever pulled off.

So, will the alt-right come to Trump’s rescue?

My colleague Chris Beck told you about the alt-right earlier this week, and the laughable attempt by the Trump-shilling website Breitbart.com to pass off a bunch of not particularly bright Internet racists as brilliant and effective thinkers and pranksters.

The alt-right is a loose configuration of several of the very worst Internet subcultures, including veterans of 4chan and Gamergate, armchair eugenicists, “red pill” pick-up artists, avowed neo-Nazis, people who use the word “cuckservative” unironically, and various intersections of more than one of the above. The alt-right has three defining traits: open, virulent prejudice, with a particular hard-on for Jews; passionate support for Donald Trump; and an almost entirely online existence.

And that’s why, at least for now, I’m not too exercised about the alt-right—they’ve made very little offline impact. There’s no Congressional Alt-Right Caucus. In fact, I don’t know that any real-life elected official has declared their allegiance to the alt-right. I’m yet to see any evidence that the real-life ranks of the alt-right number any higher than the high hundreds.

I even doubt the alt-right is even that large a part of the Trump coalition. Go to a Trump rally and ask how many people there have heard of the alt-right. Hell, ask Trump himself. I see this as another example of political journalists treating Twitter as real life.

If Trump somehow finds himself elected president, it will likely involve a combination of a terrorist attack, a Hillary Clinton indictment, some third-party chicanery and possibly more than one of the above. But it won’t be because of the alt-right- or the “silent majority,” either.