The claim the scolds are warding off the real censors is absurd. 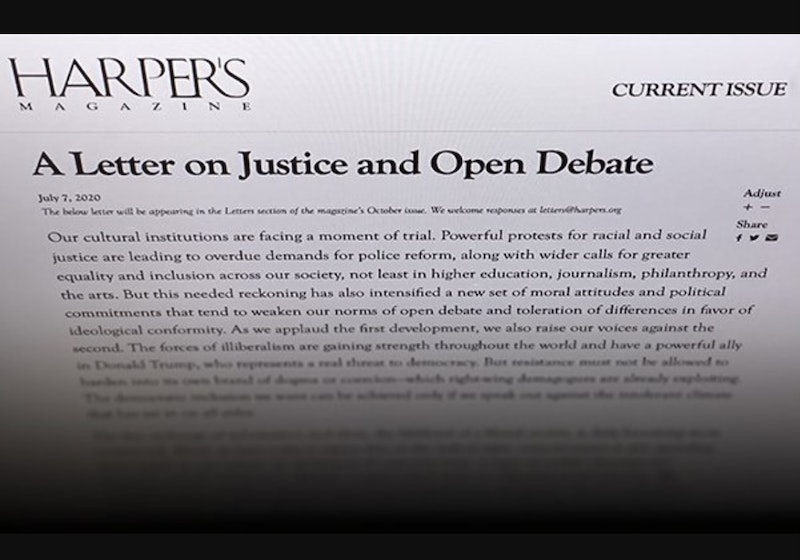 With the nation divided over abortion, it’s worth remembering we near the two-year anniversary of one of the more impressive feats of political tolerance in recent times: the July 7, 2020 letter in Harper’s urging open debate and uncensored speech, signed by over 150 intellectuals from multiple political factions. Whether you agree with their take on the dynamics of argument and its stifling or not, you have to appreciate the message sent by getting that many ideologues to put up with each other for the duration of one small project, during a plague- and riot-addled low point in recent political discourse.

How perplexing the sheer diversity of the Harper’s signatories must be to the defenders of “cancel culture” who hastened to condemn them. What nasty impulse do they reckon united, for example, Noam Chomsky, David Frum, and J.K. Rowling across the usual cultural dividing lines into a Nazi-loving axis of hate? No, really. Explain to me how these varied figures all had a simultaneous delusion, along with, say, notorious downward-puncher Salman Rushdie, that debate is good, if you contend it’s delusional.

I’ve met about a dozen of the signatories—and strongly disagreed with a few. Even one of the ones with whom I ostensibly have a great deal in common philosophically, Cathy Young, ironically, unfollowed me on Twitter in a huff a few weeks ago, just days after I decided to write this column honoring the Harper’s letter anniversary and vowing perpetual peace (after today) with its signatories to honor their achievement.

Young was upset I tweeted that you can’t blame people thinking the Uvalde massacre response was so inept it smacks of conspiracy and cover-up. However, since then we’ve learned the cops disarmed and detained one of their own who wanted to go in and attack the killer, having received a phone call pleading for help from his own shot and dying wife inside the school. One mom who managed to rescue some kids now claims Uvalde cops have been harassing her outside her home for speaking out against them. The cop in charge has ended up on the city council since the incident, while the department has gone silent after issuing contradictory timelines about the event. I’m reminded of the insurance-liability-limiting, hotel-biz-face-saving timeline revisionism from the police department in Las Vegas after the 2017 massacre there.

In any case, better that writers should conspire to keep things civil than that cops, or whoever, conspire to cover up ineptitude or abet violence. I will therefore strive to reward the admirable Harper’s participants by not picking fights with any of them, not even Chomsky. After all, much as I might disagree with, for instance, his suggestion that libertarian capitalism is little better morally than antebellum slavery, he’s in some sense of the word a fellow anarchist, and his warnings about the mass media “manufacturing consent” ought nowadays to be music even to the ears of New Right activists, with their animosity toward mainstream news.

And I sincerely hope no one pisses off Young further by tweeting questions about why the man who was the House of Representatives’ Sergeant at Arms during the January 6, 2021 Capitol riot dropped dead Monday (as if shot, rumors say), just as he was likely to get summoned to the J6 committee over new revelations about the goings-on at the Capitol. I will patiently and civilly await the facts unfolding.

I don’t even want any more conflict with Davids Brooks or Frum, who I’ve criticized for their pro-establishment slams against libertarianism and demilitarization. Neoconservatism was as much a philosophical influence in my early years as libertarianism, the skeptics movement, utilitarianism, alternative rock, or comedy, and I don’t want to forget my roots. It’s all in the family, and there should be peace here. If I can find things to admire in, say, the propaganda-criticizing and media-dissecting deconstructionist movement decades after I fought its adherents when we were undergrads, I can get along with mere Republicans.

At the same time, as the signatories presumably agree, better to be debating, even angrily, than fighting physically in the streets, as so many people lately seem itching to do. The argument from un-Harper’s-like scolds and even advocates of outright government censorship is often that we must tamp down contentious speech lest it spill over into real violence. But surely the violence tends to happen when people feel they have no other outlet.

By all means, let people keep yelling at each other and writing angry op-eds. That process, mean tweets and all, is probably what keeps most people from feeling the need to settle things with fists or guns. (It may be disappointing to hear that the Supreme Court justices aren’t getting along after the repeal of Roe v. Wade last week, but it beats hearing that they’re stabbing each other.)

The scolds would hasten to say that criticism—including campaigns to “cancel” and “deplatform” controversial speakers—is just one more layer of debate culture. Yes and no. Twitter mobs and cancel campaigns aren’t violence, aren’t government censorship, but the very intellectuals who defend such tactics should be the first to recognize that such efforts are also usually not contributions to the spirit of ongoing productive discourse. Trying to get someone fired isn’t the same as throwing him in jail, I agree, but it’s not exactly an effort to hear him out and politely weigh his arguments either, is it? That should be obvious, legal technicalities aside for a moment.

I’m reminded that 20 years ago I had some tentative discussions with the founder of the tiny leftist publishing company Soft Skull Press about writing a book for them on areas of left/right agreement. One employee of the place called me a “fascist” in an email thread about the pros and cons of collaboration. And I didn’t really mind. That feels like such a short time ago, and yet in that very different bygone era, it never would’ve crossed my mind to think that that admirably spirited Soft Skull Press employee was likely to follow up with an obsessive campaign to get me fired or banned from campuses, and I wouldn’t have contemplated doing such a thing to him.

Let everyone speak, then we’ll debate, and it’ll go on like that, forever. It has to, even on topics such as abortion that people wish they could somehow resolve once and for all in a fiery final battle.