It’s not particularly thrown into question by the abortion decision. 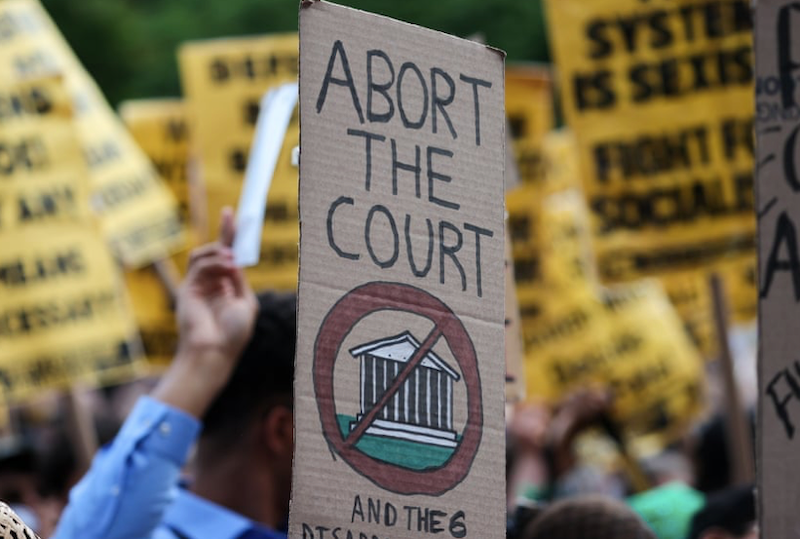 Most of the outraged commentary on the Supreme Court's abortion decision doesn’t criticize any substantial feature of it. Also, a lot of it strikes me as insincere. It attempts to generate maximum outrage without going to the trouble of trying to refute, or even summarize the decision itself. Saying over and over again that it’s “radical” or “extreme,” for example: even if I heard those terms as negatively as many I'd feel constrained to point out that it might be radical and extreme and legally required. The claim that the Court’s radical is, in turn, established by polling data, which is liable to swing month by month, and which has no bearing on the facts or the law.

Last year, anticipating both the decision and the current tone of the response, Sonia Sotomayor asked, “Will this institution survive the stench that [overturning Roe v. Wade] creates in the public perception that the Constitution and its reading are just political acts? I don’t see how it is possible… How will we survive? How will the court survive?” That’s why, I think, she leaked the draft decision, which was possibly as damaging to the Court as the decision itself. But the commentary now has gone a bit further: lots of people are saying the Court shouldn’t survive.

In the Guardian, Jill Filipovic writes, "As of 24 June 2022, the US Supreme Court should officially be understood as an illegitimate institution—a tool of minority rule over the majority, and as part of a far-right ideological and authoritarian takeover that must be snuffed out if we want American democracy to survive." Ruth Marcus in The Washington Post: "This radical conservative majority has proven itself unmoored from the rule of law, and therefore unworthy of the public esteem that can be its only source of enduring authority." Dahlia Lithwick, in Slate, quotes the Court's approval rating (apparently around 25 percent) and continues, "When the public is finally ready to give up on the court, there will be nobody to blame but the six justices who gave them nothing to believe in." Linda Greenhouse, the New York Times' Pulitzer-winning erstwhile Supreme Court correspondent, writes a "requiem" for the court and says that the justices have "finished off" its legitimacy.

It’d surprise me if Greenhouse or Lithwick, for example, were previously unaware that the Supreme Court is an undemocratic institution, in the sense that the justices are not directly elected by popular vote and serve lifetime appointments intended to insulate them from the vicissitudes of popular opinion. I wonder whether, all things considered, they think that the judicial system should be much more attuned to how it's polling, or gear its decisions more consistently to enhancing its popularity. I wonder how they think the court's polling numbers bear, in any particular case, on the facts or the law.

For example, how should polling numbers or the public reputation of the Court have been taken into account in deciding Brown v. Board of Education? If that decision was unpopular at the moment it was delivered, does that make it legally or factually wrong? For that matter, Brown v. Boardsmashed a series of precedents on which state governments and school systems had come to depend. That in itself doesn’t even begin to suggest that the case was wrongly decided, because in depending on the precedents, these governments and school systems were leaning on something that was constitutionally and morally indefensible.

All these commentators point out that the conservative majority on the Court was produced by presidents who lost the popular vote (forgetting that George W. Bush won the popular vote in 2004 and nominated Roberts and Alito after that), and that Gorsuch and Barrett were confirmed under Mitch McConnell's manipulations. But I don't think that they're also denying that Bush and Donald Trump were fairly elected by the procedures given in the Constitution, or that Gorsuch and Barrett were indeed confirmed by the Senate. If these are good arguments against the legitimacy of the Court, they’re completely independent of the abortion decision. Rather, they are attacks on the legitimacy of the American political system as a whole, on other grounds.

The pundits keep attacking the current Court for showing itself to be political. But this decision is no more political than Brown v. Boardor, for that matter, Plessy v. Ferguson. They object not to the fact that the decision is political in some sense (actually, I think probably Amy Coney Barrett, in her heart, thinks of it as spiritual), but to the fact that they disagree with the politics. Obviously, they'd be happy to have a Court of Democratic appointees reach an unpopular pro-choice decision. So, Dahlia Lithwick: try to be sincere.

I see that people like Filipovic and Marcus are trying to generate maximum outrage or panic, but they’re taking a notably irrelevant approach. They’re not really concerned with how the Court is polling, and they’re (obviously) not concerned with defending its legitimacy. I don't think they're particularly concerned with stare decisis, a principle that both the left and the right will elevate or dismiss just to the extent that a particular result reflects their antecedent commitments. These arguments are irrelevant distractions. I don't think they’re effective in forming public opinion, either.

I'd suggest to Sotomayor and Greenhouse that they take direct aim at the decision's legal reasoning and ignore the public relations. The approach they seem to be suggesting will backfire badly, because a Court that reaches decisions by polling definitely has no credibility.