No one can take motherhood away from me, but no one should foist that upon me either. It’s my choice. 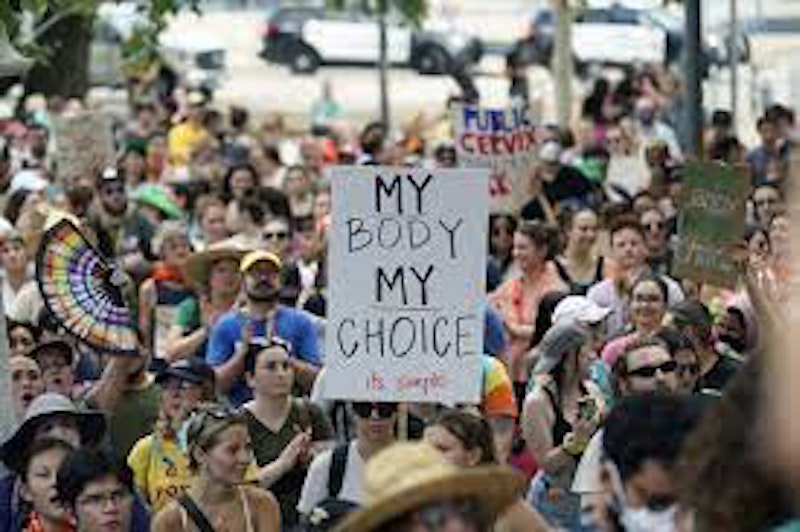 I’m pro-life. But not like the anti-abortion activists define it. On the wall of my son’s karate dojo there’s a creed. One of the 12 elements is “live life to the fullest.” That’s a statement of life. Mandating a woman carries a child to term may be forcing a woman to give up a life—her life. Pregnancy, miscarriage and abortion all involve pain and risk. I’ve had this pain more than once with varying outcomes. However each time I had the freedom of choice; and the value of support networks.

When I was in graduate school and on the cusp of defending my master’s thesis, I discovered that, despite the use of protection, I was pregnant. I wasn’t aware for several weeks, because I suffered from horrible but unpredictable periods. Sometimes it would be 45 days between cycles. A friend mentioned that I was looking very healthy and had put on some weight. This was a powerful statement since for much of pubescent life I’d suffered from an eating disorder, anorexia nervosa. And at the time I was still managing my eating disorder, anxiety, and depression. So when my friend mentioned the weight gain, it was distressing, and I mentioned that my breast hurt. She looked concerned and asked if I was pregnant.

I was, and I was well over six weeks since I had no way of tracking my periods (many women who suffer from eating disorders do not have regular periods). Although I had a therapist at the time, I called my long-time doctor, who was across the country from where I was completing my degree. He counseled me on the many options. He was also aware of my eating disorder and depression, as well as my pain menstrual cycles and cramps. He agreed that carrying the pregnancy to term could have devastating effects on my health and even my life.

Mental health professionals often comment that an eating disorder is a “soft form” of suicide. That the depression and hopelessness result in the desire to wither away. Although I was doing well with therapy and had a lot to look forward to after graduation, I was still suffering from intense anxiety resulting in cycles of healthy eating and starvation. My doctor knew that trying to carry the child to term could result in further eating disorder obsession, miscarriage or worse. Together we formulated a plan and I contacted a local doctor who could prescribe “the pill,” mifepristone. My partner at the time agreed that despite his religious objections to an abortion, this was the correct action for my health and supported me, driving me to the doctor and holding my hand throughout the appointment and the resulting pain. Both the emotional and physical pain.

The question of “the health of the mother” is an important one, and who’s to say what constitutes the health of the mother? Is it only physical, or does the emotional, financial, long-term happiness of that mother count? It’s impossible to draw a precise line. Many years later, I found my soulmate; now my husband. Since we met and married a little later in life, we decided to immediately try having children. In all likelihood, I became pregnant on our honeymoon. Within a few weeks I went in for an ultrasound, and I could see the beginning of the heartbeat. My next one was only a few weeks later—and there was no heartbeat. I’d suffered a miscarriage, and my body hadn’t expelled the fetus, so it needed to be removed. I had to schedule an appointment to go back for a D&C, dilation and curettage, essentially an abortion to remove the now non-viable fetus.

I’ve had a number of miscarriages since then; an unknown number since not all miscarriages are clinically verified, and they sometimes occur when you don’t know you’re pregnant. One was in a small hotel in Pokhara, Nepal, the night before an experience of trekking in the Himalayas. We’d sought a pregnancy test in Kathmandu as I hadn’t had my period, and I began spotting and then bleeding on the bumpy bus ride from Kathmandu. I will never forget the excruciating pain of sitting on the toilet in a third-world hotel to allow the fetus to pass.

Experiencing a miscarriage takes a toll on a woman; on one’s soul as well as the body. There’s a sense of grief that can be hard to articulate. Part of that grief is the sense that your body’s broken, that you are less than a woman because you couldn’t carry that child to term, and that you have no control. If I’d been forced to experience that pain when I was in graduate school, I’m not sure how I would have endured. I didn’t have the level of understanding and confidence back then that I did when suffering through miscarriage after miscarriage. But most importantly I didn’t have as strong a support network as with my husband by my side.

Perhaps it was that I was now what they considered “advance maternal age,” perhaps it was all the menstrual problems I had throughout my life, perhaps it was a long-term side effect from the eating disorder that was the cause of all of the miscarriages, or perhaps it was because later, after having a hysterectomy I discovered I suffered from endometriosis. When I finally did conceive my child it was a celebration.

I spent the first 13 weeks of pregnancy nauseous and actually lost weight. My past fears I’d expressed to my therapists at the height of my eating disorder, that I’d starve a child inside me, felt so plausible. Then my doctors told me it wasn’t how much I ate but the quality of what I ate that mattered. Then my husband found an article indicating that nausea was correlated with intelligence of the child. I clung to these ideas with relief until the nausea subsided and I could revel in the experience and joy of being pregnant. Only to discover during my 20-week anatomy scan that our child had part of his brain missing. There are eight parts to the vermis (which links the left and right hemispheres of the cerebellum) and our child had only four. This extremely rare abnormality, known as Dandy-Walker variant, can result in a spectrum of disorders, including heart and lung defects, problems or developmental delays with vision, hearing, speech, balance, and more. Effects can range from severe to minor or almost non-existent.

My husband and I spent a very intense two weeks learning everything we could about the syndrome including having a series of 3-D sonograms, in-utero MRI, and extensive research with a series of experts. There was no doubt in anyone’s mind that the portions of the brain were missing; but what the child’s life would be like was a big question. Our research turned up a study in which a majority of parents presented with this condition in-utero opted to terminate. Our research also confirmed that the child wouldn’t be in pain but might be in need of lifelong special-needs care.

With faith in each other, the doctors we’d chosen, and our network of family and friends supporting us, we chose life. We didn’t abort. We had faith we were prepared for a new and potentially difficult adventure. Every two weeks I had 3-D sonograms to ensure that the baby’s head was not swelling with fluid, and prepared for an in-utero shunt to be performed if that did develop. And every time things continued to look stable, we cried tears of relief.

As the delivery came near and things progressed uneventfully, we made sure we had a pediatrician who was prepared to deal with a special-needs child, and had a neurological consult scheduled for what might be just days after the birth. Our plan included not just my desire for natural delivery or who to call, but scheduling of a genetic test to look for other markers and an MRI of the baby’s brain; all made easier by the fact that the child would be placed in the NICU.

Our child is our miracle! All children are miracles but upon the birth of this beautiful baby all the scans, MRI and neurological consults identified that the remainder of the vermis had developed properly, normally, completely. All the doctors were surprised, and it even caused some questioning as to what’s really known about when this part of the brain develops in-utero. Many years on, our child remains an exceptional child, defying all kinds of norms.

You can see why I might claim to be pro-life. My husband and I had faith and trust that things would be okay, and they were. We trusted that abortion wasn’t the solution in this case and were rewarded for that trust. But—and this is a big but—we had the choice.

All along that choice was protected and validated. We had a support network. We had health insurance that covered the doctors and specialists and would continue to do so after the birth. And we had the financial means to manage and support the needs for us and our child. Everyone should be able to evaluate those resources and determine if their own situation has the necessary support for a healthy, happy, and prosperous life.

Looking at the judgment handed down by the Supreme Court and the new laws proposed by many states, one issue clearly missing is a discussion and definition of a mother’s health. Some of these laws specifically address that it’s the physical health only. But that’s inextricably linked to our emotional and even our financial health. When I made the decision many years ago to have an abortion, it was my emotional state that raised the question of my physical health.

While many will look at financial or career choices as a catalyst for a decision on abortion as frivolous or selfish, I’ve had times where I didn’t have health insurance and felt close to financial ruin. I think almost every parent has felt the burden of costs associated with raising a child; from keeping a roof over their head, to food on the table, to a good school for their future. I can only imagine having to go through the number of doctors and specialists we did without health insurance—the out-of-pocket expenses alone would be staggering, and the additional stress or trying to figure out which appointment or which scan was necessary could’ve broken anyone.

As people we like to attribute our values as global, our solutions as sacrosanct, our opinions as universal, but the reality is we can’t possibly understand the anguishing decisions facing others. One could look at my story and think she couldn’t possibly have had all those problems; yet I did. And each decision was difficult and not without guilt. And each decision made me who I am today; a strong, confident, determined woman whose greatest accomplishment (among many) is being a mother. No one can take that away from me, but no should foist that upon me either. It’s my choice.