I remember the time I knew what happiness was. 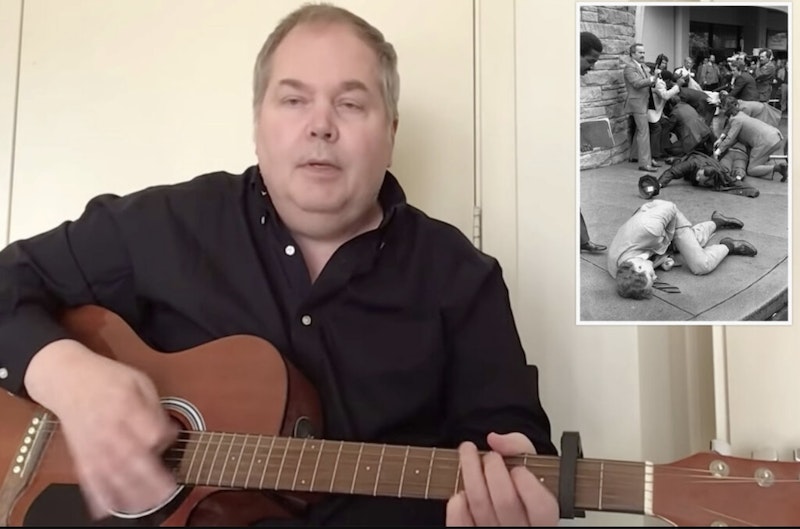 There were rumors Trump, the Cats aficionado and angry former President, might use the occasion of July 4 festivities to declare his intention to run again in 2024.

My love-hate relationship with our culture’s eccentrics and with our culture’s moderating tendencies can be summed up by my longstanding fear that the day will come when only the crazy people dare to be free—though in truth everyone should be free, even the boring and predictable people.

My utilitarian, Whig-like take on history has always been the hope (by no means the certainty) that in fits and starts, the world will gradually grow easier for sane people to navigate happily. But lately, I think one form people’s pessimism about the future takes is their conviction that you have to be as audacious as a Trump, a gangsta rapper, or at least a Kardashian to thrive. Exhausting. Amusing to behold at times, but not the easygoing and easily-achieved freedom-for-all that people have wanted for generations.

Part of the problem is that ever-growing, snippy, carping list of Do’s and Don’ts that respectable society is pushing upon the little people despite all the conflict it causes: ever-changing germ protocols, pronoun-policing stricter than any “grammar Nazi” of decades past, still-proliferating government regulations, and corporations that want all your passwords from home before you can have a desk in the office. It’s no surprise that the administrator-to-student ratio at Yale is reportedly now about 1 to 1. After all, it’s schools like that that churn out the reports saying big government is good, H.R. departments add value, and rising healthcare costs aren’t caused by regulations that encouraged the gigantic increase in managers and middle-men at hospitals over the past century.

You can understand that story, perhaps more easily than you can understand multimillionaire Green Day singer Billie Joe Armstrong, who owes so much to the music lovers of this nation, declaring that he now plans to leave America for good in a snit over the Supreme Court overturning Roe v. Wade and move to Europe (where most nations have long had stricter abortion laws than the U.S., but eccentric creative types don’t sweat the legal details).

Don’t start missing Armstrong just yet, though: The best argument for thinking his vow is unserious grandstanding is that he’s a celebrity. He can say or do whatever he wants, including changing his mind. Again, that’s the bastardized form of freedom you all get for now, lowly masses.

How dry and complicated my fondest wishes for freedom sound by comparison. I’d love it if the U.S. just got a few big-picture things right like privatizing Social Security, long mismanaged by government. (So credit to Biden for getting one small thing right: appointing Cato/American Enterprise Institute analyst Andrew Biggs to the Social Security reform commission.)

And spare me accusations of hypocrisy over my relative indifference to the possibility some states will now outlaw abortion. Unlike most people on left or right, I will steadfastly stick to my position that the issue is ambiguous and should probably be left to the states, even if the time comes when the Republicans attempt a one-size-fits-all nationwide ban at the federal level.

A raised pistol like Hinckley’s or a raised rock singer voice like Armstrong’s gets a lot of attention, and today people feel mounting pressure to reduce every political argument to a crazy-sounding slogan or crazy-sounding tweet, butI’m going to stick to nuance on most of the big issues until they pry nuance from my cold, dead hands.

I’m sure many would say I’m too radical to claim the “nuance” mantle. People have called me an extremist for decades now. But with the left spawning socialists like AOC; the right lately creating a weird, contradictory blend of theocracy, corporate subsidies, harsh policing, war, isolationism, rudeness, and xenophobia (50-plus overheated migrants don’t die in a smuggler’s truck without being pushed to that extreme by onerous laws); and the UK’s Guardian reporting that a quarter of Americans are willing to take up arms against the government (I’d guess even more are willing than admitted it, given how little people trust survey-takers to keep responses confidential), maybe the libertarian guy isn’t the nutcase here.

Maybe the libertarian understands freedom better than almost anyone, and has a very sane, non-violent philosophical model for bringing the promises of 1776 to fruition for all. Yet even in a world where a quarter of the populace is ready to rebel, to get crazy even by eccentric American standards, still I’ve had prominent libertarians—the ones who claim to be the “sane, reasonable” members of the movement—tell me hateful rhetoric against government can only backfire, that we must maintain the cautious tones of mainstream Democrats and Republicans if we wish to be taken seriously, the piecemeal legislative tactics of DC technocrats if we hope to make real gains. That advice, commonplace among libertarians for decades, may now be out of date.

I’ll think with nuance because philosophical principle usually demands it, but when it comes to rhetoric and tactics, in a nation itching more and more to get crazy, I question whether the slow, plodding, gradualist approach to liberty is leading anywhere. This July Fourth, more than most through which I’ve lived, people seem to have the anxiety-inducing sense that time is running out (financially, morally, and otherwise) and it may thus be time to try something previously thought bonkers, time to pounce—without violence, of course, but not without a bit more action.