They Say We're Going to Win, But Everything Still Looks Shitty

If Obama does make it, will anybody be able to tell? 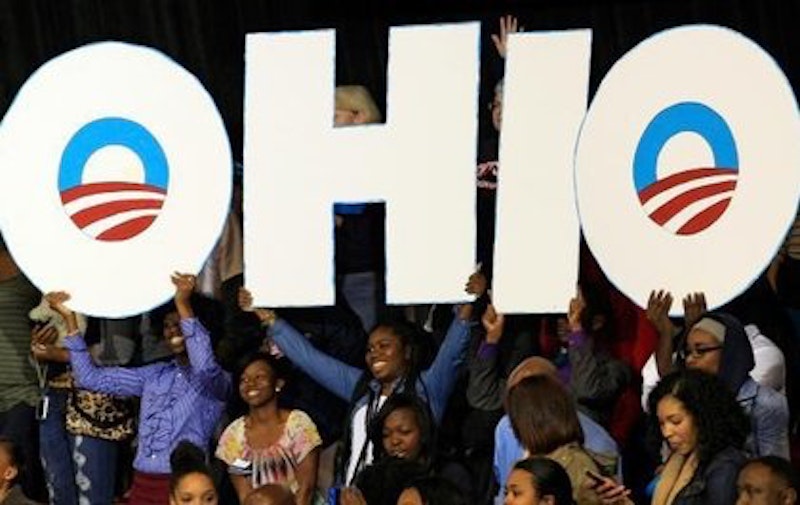 “Well, sure, George,” says David Plouffe, and his voice breaks on “sure.” George Stephanopoulos just asked if there was anything that worried him “in these final 48 hours.” Hence the voice break. Plouffe turns out to be a Jon Cryer type; I'd never seen him before. In 2008 he managed Obama and now he's a surrogate, and he explains to Stephanopoulos about volunteers and turnout and how Obama and Clinton are out campaigning. He says he is certain Obama will win.

The last hours. Liberals are confident again, sort of. They feel quite certain, almost, that their moccasins won't slip and they'll make it home before the precipice gives way. The state polls are still good, with “good” meaning edges of two points or three points or 1.5 points. Those states couldn't all turn the wrong way—could they? Look at Ohio, the key state. That has three points for the president's lead, which is almost substantial. Well, 2.7 points.

So liberals are confident, but we're also nervous. Yes, even though the President came through on Sandy, a performance acknowledged as “great” by Chris Christie, governor of New Jersey and keynote speaker at Mitt Romney's nominating convention. Greatness was at the start of the week. Now Romney has us bickering over shit. ”Voting is the best revenge” and so on. Who knows? To many people that may sound like a black power slogan, and those people may be in a better position to vote than those who don't see anything bad about the remark. People in Midwestern suburbs get scared by strange things.

Liberals' rope bridge. Even if our chain of swing states adds up, what we get is an Electoral College win, not a popular-vote majority. We just have to hope the second will come along with the first. Even if it does, it may take weeks to show up. Nate Cohn, at The New Republic: “If Obama ultimately wins the popular vote by a narrow margin, as suggested by the current average of national polls, Obama won’t lead the popular vote on Election Night and might not for weeks.” It seems like any sort of procedural delay has an undue effect on Democratic votes. That's what I take away; admittedly, I found the piece's explanation opaque. But, sure, if something can go wrong, why won't it?

In a close race, Cohn says, Mitt Romney's winning percentage could stay on TV screens a long time before the president pulls ahead. I'll add to that. Republicans will conclude that “Chicago” pulled off something dirty with the late-counted ballots. Republican voters will say it outright, and office-holders will drop cutely worded hints. The feel will be like that of the birth certificate and Muslim stuff, but the Republicans will actually press this harder. The election rip-off of 2012 will become part of GOP history, like the story about FDR selling out Eastern Europe at Yalta. People outside the party will also nod their heads at the thought. Everyone saw the phantom Romney win on their screens. To counter that, they will just have to trust in a bunch of experts who say this is how the system works with a close vote.

Ragged process, ragged outcomes. Buzzfeed says people aren't going to rallies anymore. The site adds that Romney and Obama are jumping from place to place more quickly and this makes it harder to get big crowds lined up. Even so, the site says, look at these numbers: “Romney was routinely drawing more than 10,000 in his rallies — particularly after the first presidential debate — but this week it’s been 2,800 [in] Roanoke; 4,200 in Jacksonville; 3,500 in Coral Gables; and 2,000 in Tampa. Obama, known for his reliably 50,000-person mega-rallies at this point in the campaign in 2008 was down to 2,600 in Green Bay and 4,600 in Las Vegas on Thursday.”

Billions of dollars dumped out and just a few ragged crowds to show for it. In fact, the whole process seems to have gone ragged. A few weeks ago I was hoping for a “sit down and shut up” election. I thought maybe the Democrats would pick up enough clout that they could get the Republicans to back off and allow government to proceed. Looks like no. Liberal pundits say the Republicans will keep the House, so even if filibuster reform goes through we'll still have one chamber of Congress tied up by saboteurs. Government will continue to be ragged, with ragged results like the present semi-recovery. Each time there's another election, people will have less reason to turn out. The votes don't even get counted, do they? Look what happened with Romney in 2012.

Noonan moment. Even though the nation's crumbling, I can cling to Peggy Noonan and her quiet moral example. In her latest Wall Street Journal column she is magnanimous toward Chris Christie: “If Mitt Romney loses, will Mr. Christie garner Republican criticism for his hearty embrace of President Obama just days before the election? Yes, he will. Will it hurt him in Jersey? Not a bit. Will it help Jersey? Yes. They are cold and wet and running out of food in the house. Keep your friends close and your president closer.”

The premise here is that sometimes you got to kiss the Man's ass when people's lives are at stake. The Man in this case being Obama. If Christie didn't make him look good in public, Obama might take his time about helping fellow Americans near death. Noonan doesn't argue that Obama is this way. Her trick is to act like it's a given. She drops her little implication and moves right along, like she was dropping Kleenex in the lobby of a hotel.

And after Obama busted his hump! She's beautiful that way.