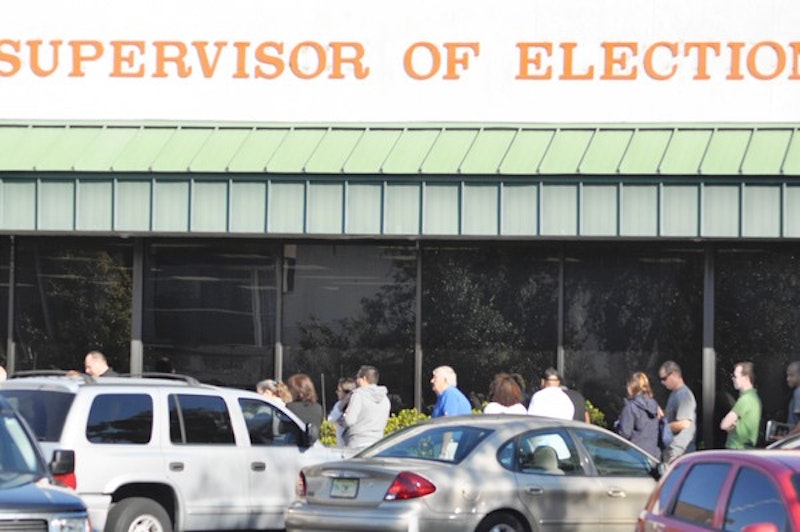 It was noon last Saturday in Florida and in the parking lot of the Dr. Phillips Public library a few hundred people stood in a line that snaked around the lot’s perimeter and into a dusty field that provided the only barrier between the celebration of the democratic process and the normal and quiet suburban town. Campaign volunteers listlessly tried to distribute buttons, fliers, signs, t-shirts, water bottles and other knick-knacks, but the primary concern of the arriving voters appeared to be a severe anxiety about how to pull their cars over the boundary of the parking lot and into the field where a preponderance of other people had somehow found a point of entry, parked, and joined the voting procession.  The campaign volunteers seemed to understand.

The logistics of the process went unstated, but everyone seemed to get the gist: park your car, preferably in the lot but in all likelihood in the field that may or may not be municipal property, and lock it up; grab some form of entertainment prior to exiting your vehicle; find the end of the line; proceed forward, and don’t get too close to the person in front of you who dreaded the idea of trying to politely chat you up in the midst of trying to determine your political leanings, so the both of you could quit the chit-chat and get right down to some partisan bitching.

It may help to know that the Florida electorate had quite a diverse crowd. It is probably best for democracy and freedom when the polls resemble a DMV. The whispers of systematic disenfranchisement by GOP Governor Rick Scott and his compliant legislature did not, at least based on crowd appearance between the hours of noon and 2:30 p.m., look to hold water. The crowd’s composition featured a number of twentysomething white hipsters; Stepford wives; families of black people complete with mom and dad and the kids who got so bored they started to play with other kids and run around, one girl who can only be described as the perfect looking young Republican girl with straight light brown hair; Pakistani grandparents; white guys who did not appear to be undercover law enforcement but chose to carry a holstered Glock 19 9mm 15RD Semi-Automatic Handguns; and just a bunch of people who looked tired and were drinking Gatorade.

A certain amount of dread is inherent to time-consuming bureaucracy, which partly explains the mood of the crowd. But the other part, the part the no one talks about or would care to admit, is the terrible cynicism latent in everyone at the Southwest Branch Public Library.

There is a difficulty in insulating yourself from feeling much but disdain when thinking about politics. Campaign finance law in the post-Citizen United era all but makes the relationship between politicians and the voters less like constituency and resembling a marriage of necessity where we know that they are having an affair with a much younger, more attractive, emotionally bankrupt floozy. We are getting sold something that we will end up paying for but whatever it is that we are buying benefits someone else.

About 40 minutes into the wait, after the weather and the “Can you believe this economy?” small talk ended, a Romney t-shirt-wearing Stepford and her mother declared that the heat was more than they could take and the Stepford grandmother had some sort of health condition that required her to hydrate and keep cool and stay off of her feet. Neither of them specifically asked any of us around them to hold their spot, but Nancy R, a 34-year-old mother of two and self identified “senior in my Master’s program” (of unspecified concentration), offered to hold their spots while they cooled off, a polite offer that the Stepfords quickly and graciously accepted. Nancy R, mom and student, confirmed her support of the incumbent POTUS, saying to no one in particular, “Fucking Republicans.”

Her hyperbolic disdain drew a stiff chuckle from the Central FL hipsters and got a bit of the Irish up in yours truly. The heat wasn’t intense, but I certainly regretted the sweatpants I sported to the polls and should’ve picked up a second Gatorade. I was irritable, and the slight concession that the Stepfords asked for pissed me off. And as an extension of that irritability and fickleness, it became clear to me why Republicans think the Dems are a collection of spineless hippies. Democrats seem to lack the ability to tell a Republican to her botoxed face that she and her obnoxious mother should either get out of line and return to the polls when the sun isn’t mercilessly beating down on everyone or buck up and stand their like the rest of us. I felt justified and righteous in my emasculating judgment of Democrats until I saw the Glockophiles staring down the Pakistani couple behind me, chuckling about the old lady’s hijab, and pointing at her husband’s like he had a suicide vest on under his windbreaker. It did not seem to matter to the Glockophiles that the couple was in their 70s, American citizens, and openly voting Romney based on the Romney/Ryan button that the husband wore on his jacket.

Here at the Southwest Branch Public Library, the cynicism came to the point where it registered with everyone, but everyone ignored it.  The split between the parties existed within the parties, and the enemies of your friends became your allies until you needed to find a reason to hate them. It did not exist as a paradox or a confusing irony but more of a necessary dissonance, because regardless of who we were about to vote for we could not stand the very thought of casting that vote. In order to cast that vote though, in order to justify waiting in a sweaty line for three hours, we all had project our frustration with politics on each other. The tragedy that exists here—the rhetorical question that it impatiently thrusts forward—is whether anyone would care to admit that this whole process is a walking hangover, a cynical hair of the dog that we all need like a Gatorade to convince ourselves that we can live with the paltry leadership we have taken to be acceptable. Stay cool.