Nothing ventured, nothing gained. 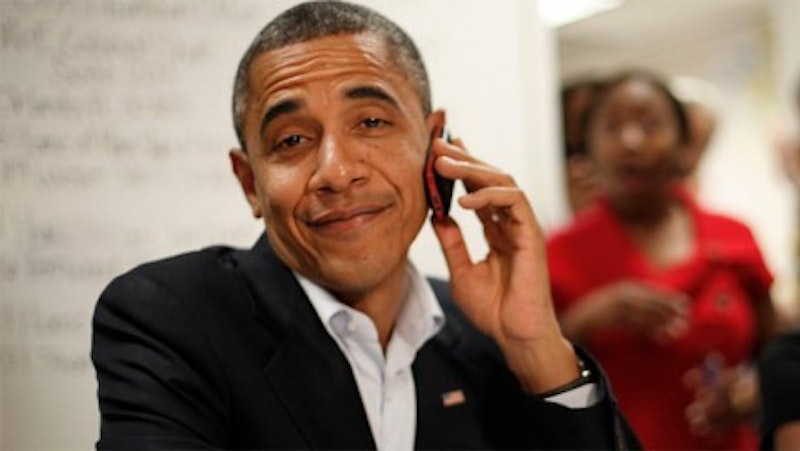 “The campaign is trying to reverse a decline in the enthusiasm that surrounded Obama four years ago. The campaign trip this week, which aides said would include the president’s calling undecided voters from Air Force One, is the latest high-profile bid to promote his candidacy. The New York Times,” 10/20/12.

Barack Obama: I don’t know, David. This feels… cheap, undignified, like a stunt.

David Axelrod: And you’re right, Mr. President, but this is politics; actually, it’s retail politics, only meta, because the act of making each of these calls magnifies your positives through a MSM megaphone. This is a smart move, and it’s foolproof. You can’t possibly lose.

Obama: Are you absolutely certain of this? Has everyone on the call list been thoroughly vetted? Are we sure we’re not moonwalking into any traps?

Axelrod: It’s on the up and up. Trust me.

Obama: So who’s the next one we’re calling?

Obama: What’s he majoring in?

Aide: Ceramics, with a Humanities minor. He won a regional title.

The phone rings for five minutes before someone answers.

Jeff Tremaine: Who… who is this?

Obama: I assure you, Jeff, this isn’t Teddy.

Tremaine: What day is it?

Obama: (chuckles) No, really, Jeff, I am the President. I wanted to talk to you for a few minutes today, about how you’re planning to cast your vote this November.

Tremaine: (the sound of a lighter, bubbling water, and a sharp exhale are heard) Whoa.

Tremaine: Teddy? Teddy, man, juice. Where is it? I need some granola, something.

Obama: Jeff, this is Barack Obama, but I know that’s kind of formal, so you can call me Barry.

Tremaine: Found the granola! Found it.

Obama: You should add milk.

Obama: Yeah. And sugar. It’s good. The difference is huge.

Tremaine: Holy shit, I’m supposed to be in Boca Raton for a black bloc protest, bro. Are you down with black bloc? We’re marching on the marshes, it’s going to be intense. Vegan crabcakes. Organic crack. Tent cities. Wait, where are you right now?

Obama: Just, um, stay away from your polling place. Please.

Aide: Sir, we’re putting you through to a Mr. Devin Mills of Winesburg, Ohio. Please stand by for Mr. Mills.

Barack Obama: I don’t know how many more of these freak shows I can handle. (coughs) Background?

Aide: Retired welder, donated to Nader in ’00 but never officially registered to vote, no known photographs of him exist.

Obama: Enigmatic. He could be a tough nut to crack.

Obama: Okay, thanks. Set it up. (crosses self)

Obama: Good evening. I wondered if I could have a few minutes of your time.

Obama: Well, I’m not selling anything, Mr. Mills. I’m the president of the United States, and this evening I’d like to talk to you about the future of America.

Mills: What you don’t understand, Mr. President, is that I’m trapped in a basement apartment full of mail-order catalogues for things that I do not need. Every day, another truckload of these damned things arrives here, which means that it’s necessary for me to catalogue them somehow, and when I’m not busy doing that, I’m fielding calls from telemarketers and political campaigns. This presents difficulties for me in terms of moving forward.

Obama: Mr. Mills, what can the government do to help improve your quality of life?

Mills: Get all these goddamned weasels out of my life. Get me out from all of these catalogues.

Obama: There are agencies that can help you with that, and I’m happy to provide you with that information. First, though, let’s talk about Medicare—

Mills: LOOK, DID YOU HEAR ME? ARE YOU REALLY LISTENING? I AM LITERALLY HALF-BURIED IN MY BASEMENT APARTMENT RIGHT NOW UNDER A TON OF MOLDERING CATALOGUES, BECAUSE I’M AN ELDERLY HOARDER WHO LIVES ALONE. NO ONE COMES TO SEE ME, SO NO ONE KNOWS I’M HERE. I’M STARVING AND DESPONDENT AND EXPERIENCING WHAT SOME MIGHT TERM “MILD HALLUCINARY INTERLUDES.”

Obama: This is not a hallucination. Sir, hang up with me and call 911 immediately.

Obama: Mr. Mills, I assure you that I am real, and this telephone call is really happening. Mr. Mills? Mr. Mills? (to aide) I think we’ve lost him. Can we get law enforcement over to his apartment somehow? This man is in a bad, bad way. (to Axelrod) People are really hurting out there, man. Really hurting.

Clarke: I hope you’re not calling about Timmy.

Clarke: My Timmy and your Duncan, this afternoon? They were meeting up over there to study for the trigonometry mid-term, though to be honest I always suspect that they expend most of their energies on those infernal video games.

Clarke: Timmy’s not making a nuisance of himself, is he? If he is, please tell me, and not Henry—Henry is at wit’s end, you know, with the petty crimes, the vandalism charge, and the Oxycontin thing, which is trumped up so I’m kind of trying to pre-screen the bad news for Henry, of which I pray there is none. Please, Barry, tell me everything’s cool, that they’re going to pass trigonometry and graduate and meet and marry nice young ladies.

Clarke: Oh! Thank goodness. I mean, Thank God. I can’t tell you the nightmares I have.

Obama: Every parent has them, Maude.

Clarke: Oh my land, I can’t get across how relieved I am. Was there a reason you called?

Obama: Just to ask what you’d like Michelle to bring to the bake sale.

Clarke: Please, as many as she can spare.

Obama: Sure thing, most definitely; I’ll pass that along. We’ll even use the fluffy vanilla frosting, the Duncan Hines. Take care of yourself, Maude. And remember to vote.

Clarke: There’s an election? When?