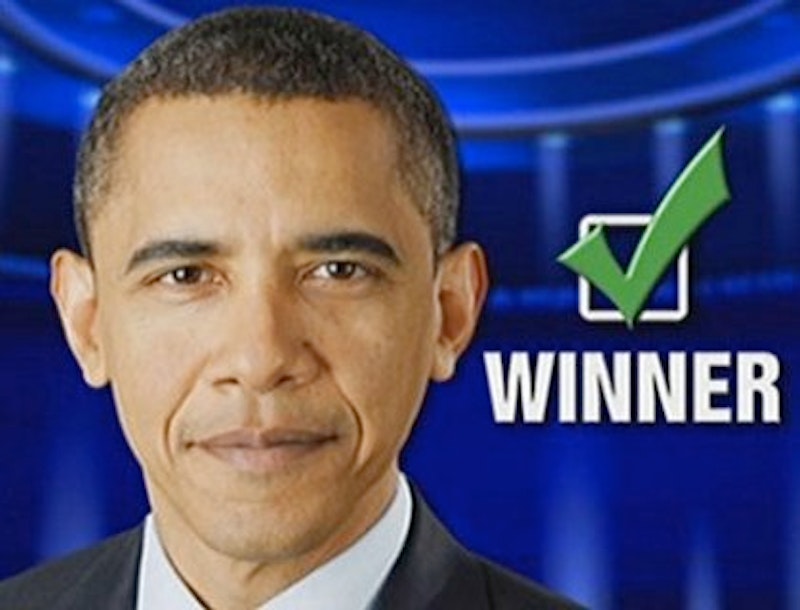 It wasn't a long night after all. Word about Ohio came a little after 11 p.m. President Obama had won his inside straight in the Electoral College. The Rust Belt and the upper Midwest had dropped into place, and next all he needed was to edge past Mitt Romney in the popular vote. Obama managed that around midnight, and now the long noise of the past 18 months is over. Pretty much. Next come postmortems and recrimination.

Obama won with unemployment at 7.9 percent. Two more tenths of a percentage and he would have been in FDR territory, a president who got reelected with a jobless rate over 8 percent. What he managed last night is still remarkable. Obama had started his four years by saying he would bring back economic good times or fail to win another term. He proved himself wrong. During his administration the economy has progressed from catastrophic to bad to feeble. That's better than going in the other direction, but a good economy is still a ways off. For a lot of people that means misery is present in their lives. Yet half the country voted to keep the president.

I like to think that some significant portion of the Obama bloc was made up of people who simply remembered what had gone before. The Romney campaign was counting on a brute reflex: The blue button didn't work, so press the red button. But a certain number of the voters being aimed at could operate by thought instead of reflex. Like mature adults with functioning brains, they took into consideration what happened the last time they pushed the red button. Or so my theory goes. For support, I point to exit polls that find most voters think the economy is the fault of George W. Bush. Those voters have got their heads screwed on right.

Another point. Mitt Romney is a no-class jerk, a trait he showcased during the campaign's final week. That “relief rally” where he bought a pile of goods from Wal-Mart and then pretended voters were bringing them—how cheesy can you get? And the ad about the jeeps being made in China. Actually the jeeps were for the Chinese market, and meanwhile jobs were being added in the United States to build more jeeps here. Romney figured that voters in Ohio would be terrified about losing their jobs. He didn't figure that the manufacturer and the unions would have an interest in getting out the truth, or that the local press would have an audience eager to get the lowdown on the little matter of their livelihoods. He thought people would be too scared and angry to think twice, but they were way ahead of him.

There's a term for doing something so small and mean that it's self-defeating. It's called being a cheap little schmuck. Of all the candidate's many qualities, schmuckiness stood out the most.

Other factors. The electorate is no longer as white-heavy as it's always been. Many non-whites stuck with the President to prove a point. Others listened to the GOP's immigration rhetoric and decided there was nothing for them with those people. (Of course, there were many others who simply favored the President's policies and recognized his ability as an administrator. But racial and ethnic politics have always played a part in America's elections, for better or worse—this time for better.)

Obama has spent years building a campaign machine, one that uses statistical data more skillfully and carefully than any other. In 2011, Obama loaned out his machine to a mayoral candidate in North Carolina. The candidate won where other Democrats had lost. Obama's people pointed to this as a sign that they could mobilize the voters they needed, and they were right.

Obama has governed well. He took the risk of bailing out the car companies and ordering a hit on Osama bin Laden. Oddly enough, at election time we discovered that autoworkers in Michigan and Ohio wanted Obama to stay in office, and that the electorate wouldn't buy the idea that he was some radical feeb.

The Republicans came up with good reasons for women to vote against them. The party was really quite resourceful about this. The ultrasound thing—imagine thinking up a bill that leaves everyone of childbearing age with the possibility that one day her government might shove an instrument up her orifice and against her will.

Finally, there was last week's superstorm. Obama stepped up and did his job, and the whole country saw him doing it. Competence and dedication in the face of a natural disaster should be minimum requirements for a president. But experience has taught us that's not the case.

Drama? No. Romney haters perked up when the networks called Ohio and Romney headquarters stayed silent. Would he hold out? Possibly he might stage an embarrassing scene, as when he sniped at embassy staff trapped by a mob and then insisted he was standing up for freedom. He's a peevish man who haggles over what's coming to him, and he built his business career by absorbing data. Maybe he saw something in the numbers that convinced him everybody else was wrong and he still had a shot. Or maybe he was just waiting to see how the popular vote turned out. But after 90 minutes or so he made it to the hall and told his supporters the news: game over.

He did it briefly and without stammering, blinking or being a pissy jerk, and then he waved with his family and running mate and left. Good.