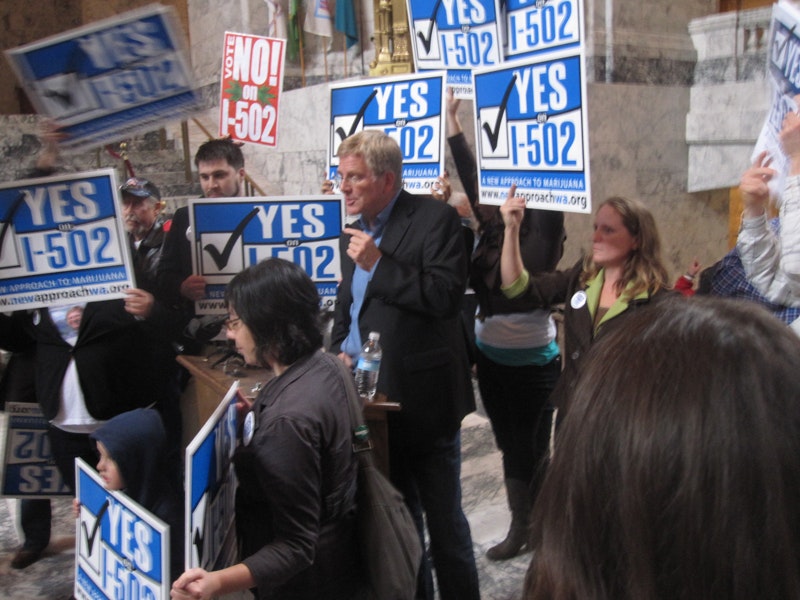 On this Election Day, supporters of Washington State’s Initiative 502, which would decriminalize and regulate marijuana, are optimistic. “In this case, the polling has stayed up there. It's almost like we're seeing a surge of support for this in the final week,” Drug Policy Alliance executive Ethan Nadelmann told Reuters. “Up there” maybe, but not way up there. The last poll had it at about 53 percent. That means turnout is going to be important. My best guess is that absent a serious youth turnout for Obama that's not going to be enough to do the job.

Pot plebiscites face unique challenges in getting people to vote for them and, no, I am not referring to the old saw about a potential majority too stoned to pull the lever. Marijuana initiatives face high hurdles in the drafting stages because of all the constraints supporters have to work around. Pot is proscribed by federal statutes, so local initiatives have to pay at least lip service to that fact. Full-on legalization is out of the question. They must instead offer voters the choice to change law enforcement priorities, reduce penalties, and carve out state-sanctioned exceptions to the federal laws—through medical exemptions, state production of cannabis and the like. Then they have to make a humbug economic case and genuflect to worries about public safety.

The drafters of Initiative 502 did all of these things well. Their diligence has only created serious problems. I know of a few local potheads who are voting against it because of the section of the initiative that establishes law enforcement benchmarks for driving under the influence of marijuana. The worry is that, at the low threshold of five nanograms per milliliter, it will only give cops an excuse to pull young people over and make their DUI quotas. Promises of the revenue potential of pot fall similarly flat. The price of marijuana is pushed up by its current legal status. Decriminalize it, come up with a decent system of production, distribution and competition. Prices will fall like a rock and projected tax revenues right along with them.

Then there are the undeniable social politics of pot. Given their general pro-market politics, Republicans ought overwhelmingly to favor decriminalization, and more. The conservative National Review famously came out in favor of complete legalization well over a decade ago with the cover headline “The War on Drugs Is Lost.” That principled argument has yet to filter down the Republican ranks.

One friend who is a Republican and a serious policy intellectual told me he voted against decriminalization when it was on the ballot in Massachusetts a few years back purely out of spite for potheads. The flip side of that is a good number of potheads who do not want government approval. One girl of my acquaintance, a habitual pot user, said that she was voting against 502 because decriminalization would rob pot of everything she liked about the experience. Politics ought to be making strange bedfellows, but good luck getting over chemistry this bad.