No matter who wins, it’s going to be a long four years. 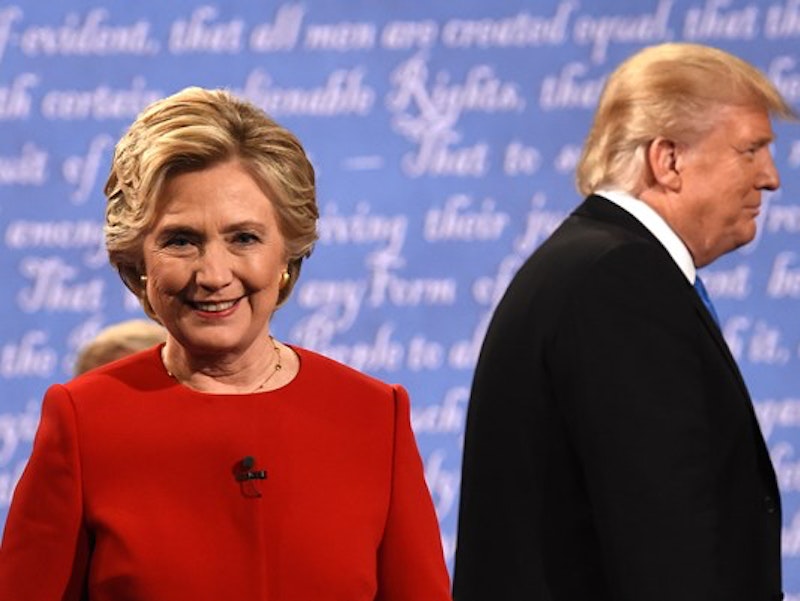 Barack Obama is a relatively non-annoying person, and yet I’m tired of his every formulation and inflection; I've heard him too much for too long. And though this 2016 election is very entertaining, the first debate made me realize that whoever wins, 2017-2021 will be a very long and exhausting era in the history of our great nation.

Though it’s against my religion to do so, I agree with the instant punditry that Trump lost. I thought he seemed gratuitously hostile, kind of overwound, a lot less loose and fun than he often is. He turned on Clinton suddenly, almost gratuitously; she remained composed. And he was very sniffly. On the other hand, though she picked up steam as she went on, she started out and always returned to mechanical word-for-word recitations of her focus-grouped phrases. Hillary's tone is always at once hectoring and machine-like; she seems entirely unconnected to her words.

So, like the rest of America, I'm less than happy with the choice for many reasons, but one of them is that, after it, either the browbeating bellower or the parrot harridan will be unavoidable, will bestride the world stage and my very television like a veritable colossus of irritation. Though Trump is capable of improvising in a way that Hillary never could, I’m already over his various catch-phrases and verbal tics ("believe me," etc). And if I have to listen to Hillary lifelessly declare that she's doing it all for the children another thousand times, any dementia that may set in by 2024 will seem a blessing.

Perhaps I should divert from the stylistic analysis for a minute to mention possible policy implications: the candidates seem to be in a competition for who values privacy least, who can keep the race war humming, who can drop more bombs, who can monitor everyone all the time and hence keep us all safe, who can most dramatically increase state intervention in the economy and in every aspect of life. Both squarely assert that when they become identical with the state, the government will nurture you, transform you, return you to a better period, fix your life.

Now, on the style side, I don't think that Trump is as incoherent as people assert. I don't think he sounds stupid, or that he can't get beyond five-word sentences. These are the terms on which the left always attacks the right, congratulating itself relentlessly on its own alleged intelligence. I'm less worried than most about the way he fact-checks, and for example whether the Clinton operation pushed birther rumors about Obama is less clear to me than it appears to The New York Times. It wouldn't surprise me if evidence emerges that he opposed the Iraq war early.

I like the loosey-goosey way he talks, and I don't think that’s liable in itself to be disastrous in a president. Listen to Putin, for example, to say nothing of Kim Jong-un ("We will drown your cities in an apocalypse of blood", etc). But Trump does wear thin. Perhaps partly because of the gender situation in this election, he’s beginning to seem like a boor, a lout, an oppressor, so full of himself that he’s heedless. Four years of that is going to seem like a very long time.

They are an exquisite contrast, these two, kind of perfect complements, a politico-gender yin yang. I'd compare them to Ali and Frazier, but that would miss out on the comedy, the mediocrity, and the suffering inflicted by the combatants, not so much on one another as on the audience. My prediction for this fight, and for the upcoming administration: pain.