How I Got Scared Into Voting For Hillary Clinton

Trump’s unfit for the presidency. 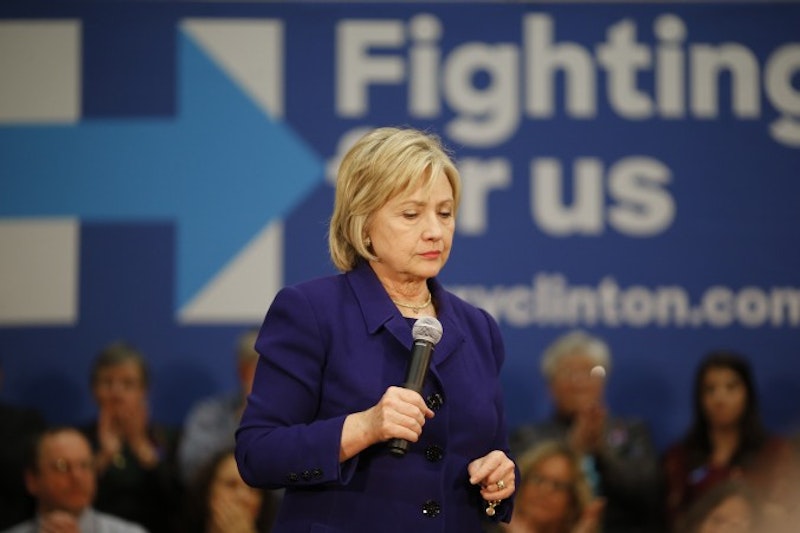 Ever since this long and depressing presidential election cycle began, I’ve steadfastly refused to support Hillary Clinton. I’ve never voted for a Republican for any office, so a Trump vote isn’t a possibility. I dislike Clinton. She's a relic of the past, beholden to too many interest groups, who should not be returning to the White House with her husband.

Trump’s the one person I’ve despised more than anyone else for years now, outside the likes of ISIS leader Abu Bakr al-Baghdadi and the Syrian President/genocidist Bashar al-Assad. My reaction to Trump is visceral. He makes my skin crawl. Just the sight of his smug, ridiculous-looking head fills me with disgust. Fortunately, I’ve had the option to ignore him in the past, but somehow it's come to pass that I’m now obliged to pay attention to the capo di tutt'i capi of all assholes on a daily basis. I’m even faced with the alarming possibility that he'll soon be the President of the United States. I can't believe this is happening.

Clinton's a hawk who favors entering foreign entanglements without thinking them through to their conclusions, and I have no confidence that she's learned from her numerous past mistakes. Instead of a vision for the future of the entire country, as Bernie Sanders had, Clinton offers piecemeal incentives to voters in the various interest groups she courts. Possessing none of her husband's innate political talents, Hillary has an otherworldly, robotic quality that's off-putting. She's so paralyzed with the fear of a miscue that she hardly bothers to take a shot any more. At her worst, as evidenced in this video, where she's asking about not being “50 points ahead,” the robot seems to be short-circuiting.

It's hard to believe her campaign actually released that video. Somehow they couldn't see that her critics on the right would feast on it, playing as it does into their vision of her as a shrill harpy. One more look at it could be all it takes to make me pull the lever for Gary Johnson or write in Bernie Sanders.

Saying Trump is the next Hitler is absurd, but his ascendancy certainly bears similarities to the German dictator’s rise to power. Like Der Führer, he bases his appeal on fear-mongering, scapegoating, and nationalistic jingoism (“Make America Great Again”). Trump, just like any successful tyrant, is asking disaffected people—”deplorables”—to place blind trust in him. He makes them feel important and tells them he’ll protect them and provide for them, just like Hitler did.

Trump doesn't talk much about policy, mainly because he’s clueless there. If there's one thing people can be certain he values, in addition to his personal wealth, it’s political strength. Over and over, he’s praised leaders who were strong enough to keep their citizens under control. I'm getting the message.

Trump can never apologize for anything, because that would humanize him. He’s the superhuman strongman who’ll smite all our enemies. Trump's practically spelling it out for everyone that he'd be an authoritarian president. The American system is supposedly strong enough to contain this type, but one decent-sized terrorist attack on his watch and the clamps would come down fast, although the best case scenario for him would be for it to happen while Obama is still in office. The fact that I have no problem imagining Trump relishing such an attack is disturbing.

Trump has less basic civics knowledge than a bright 12-year-old, and he talks like a 10-year-old. He has no respect for the Constitution, outside of the useful Second Amendment. After four years of Trump in office, top Republican leaders would have defiled themselves so badly defending his assaults on the Constitution that they'd be too deadened to pretend they even care about the founding document going forward.

If I still lived in New York, I probably wouldn't vote for Clinton, but I'm in the swing state of Virginia, where votes really count. Trump’s a freak. I sense he’s itching to use nuclear weapons to show what a badass he is. He's a born money-grubber and huckster who should stick with what he's good at. He’s a pathological liar. A criminal. He can't have his finger on “the button.” I resent having to vote for Hillary Clinton in November. It’ll be a completely defensive act.