Howard Dean Must Be a Trump Fan

Lying about a liar is still lying. 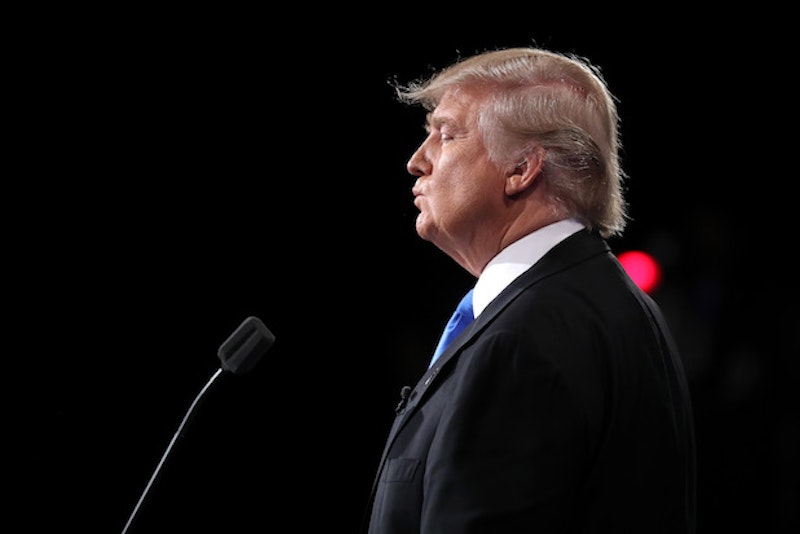 Donald Trump is a threat. He lies constantly; he normalizes racism and panders to neo-Nazis; he not very subtly encourages political violence. And he tempts his opponents to justify using the tactics against him that he uses against others.

During Monday night's debate, Trump made frequent deep sniffling noises. In response, 2004 presidential candidate Howard Dean issued the following mocking tweet: "Notice Trump sniffing all the time. Coke user?" Later, on MSNBC, Dean continued. He admitted that he couldn’t make a diagnosis, but insisted that sniffing is a symptom of cocaine use. He added that Trump's "grandiosity" was suggestive of cocaine as well.

Inevitably, partisans on social media have picked up this charge, laughingly repeating, with more or less seriousness, that, yes, maybe Trump really does use coke.

But he doesn't. Trump is a lot of things—a crook, scoundrel, bully, misogynist, racist, and a lying sack of shit. But he isn't an addict. David Cay Johnston, an investigative reporter who has tirelessly researched Trump for years, writes in his recent book The Making of Donald Trump: "Trump himself was no drug user. He didn't even drink or smoke." There is no evidence that Trump has used drugs, and those most familiar with his indiscretions testify that he won't even touch alcohol.

Dean's original tweet was, at best, ignorant and mean-spirited. His insistence on continuing to spread the imputation the next day, when he could easily have checked and found out it wasn't true, is a malicious lie. Dean is doing the same thing Trump did when he speculated that Ted Cruz's father was involved in assassinating JFK. He's promulgating a smear with no basis in truth, simply to damage a political opponent. It's repulsive.

And it's not just repulsive because it hurts Trump. Dean—as Trump often does—is deliberately linking his opponent to a stigmatized group, hoping to leverage bigotry and hatred for political gain. Drug users are one of the most despised groups in our society. Stigma against cocaine users has helped to fuel and justify decades of prison buildup; it’s also used to justify stop and frisk and punitive police buildup. Smearing Trump with cocaine use inevitably smears cocaine users with Trump—which is gross. People with drug problems, or for that matter, people who use drugs recreationally on occasion, are not responsible for Trump's fascism. It's ugly to suggest that they are, and its despicable to use a massive platform to multiply stigma against a group of people who are plenty despised already.

No doubt some Hillary Clinton backers and left partisans will argue that Trump has it coming. He has, maliciously and baselessly, made Clinton's health an issue in the campaign. His whole political career is tied to his promulgation of racist smears about Obama's birthplace. Isn't it time he got a taste of his own slime trail?

Turning Trump's weapons against him may provide some ephemeral satisfaction. It may even lead to a brief, strategic advantage. But in the long run, America's enemy is not one crooked reality television star. America's enemy is what Trump represents, which is the end of democracy, and the beginning of fascism. The idea that any tactic, lie or smear is justified by the iniquity of one's enemy: that's Trump logic. And the use of political lies and smears based on loathing of stigmatized, marginalized groups is Trump logic too. If you get rid of Trump, but institutionalize his methods, you haven't won a victory worth having. Howard Dean should be ashamed of himself. And he should apologize.