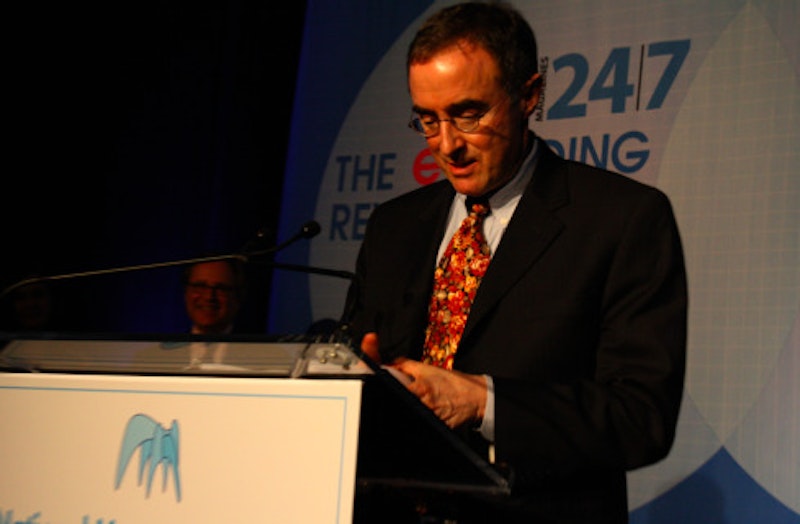 Why did Vanity Fair take on the well-traveled commentator Michael Kinsley as a columnist? Beats me, judging by his May effort, a meandering run-down on the future of the newspaper industry that adds absolutely nothing to the debate. Kinsley, 63, attempting iconoclasm, takes a cavalier, Que Sera, Sera stance about the dilemma that puzzles—justifiably so—his colleagues, concluding, “It will all work out somehow.” I suspect that Kinsley’s VF editor—if he has one—just waved a wand over the phoned-in essay, figuring “It’s Kinsley!”

Along the way, Kinsley tells readers that yes, print is essentially dead, explains the concept of aggregation—or theft, as he puts it—on horrific websites like The Huffington Post (there’s a very dumb imaginary meditation with Arianna Huffington included that’s so lacking in humor it makes Maureen Dowd look like Hugo Rifkind or James Bowman) and that it’s quite unusual today to see a passenger reading a physical book on an airplane. Now, that’s the work of an oracle! He heaps praise on Jeff Bezos (and discloses that his wife is a director at Amazon) for legitimizing electronic reading with the Kindle, which is fair enough, and then the more iffy credit for the supposed surge in consumers paying for online content. Even moldier is his contention that the future of print is actuarial, stating for those he must judge rather dim-witted that traditional newspaper/magazine readers are dying and not being replaced by youths who’ve grown up looking at a screen. This is what Vanity Fair is paying a presumably handsome fee for? (Then again, maybe the wealthy Kinsley gave the also out-of-gas monthly a break on the dough, content to add yet another title to his resume, one which includes multiple stints at The New Republic, Harper’s, The Los Angeles Times, Time, The Guardian, The Economist, The Washington Monthly, Slate, Politico, Bloomberg, and, for all I know, any number of skin or shelter mags.)

Kinsley is remarkably sanguine about the state of a profession that he once excelled at (though his mealy-mouthed, whiny tenure at Crossfire still makes me cringe, thinking of how Pat Buchanan completely overwhelmed him), and hasn’t one word to say about the plight of his many friends who’ve been downsized, fired or compromised in the past decade. Rather unsporting is my reaction, but perhaps the dwindling ranks of Kinsley disciples still hang on his every word.

He writes: “A second truth is that most newspapers aren’t very good and wouldn’t be missed by anybody who could get The New York Times or USA Today and some bloggy source of local news… A fourth truth is that rich foundations and individuals appear downright eager to jump in and supply foreign or other prestige news if newspapers won’t.” On the latter point, he mentions former Times editor Bill Keller’s work at a fledgling nonprofit dedicated to “justice” issues, and onetime Wall Street Journal managing editor Paul Steiger’s ProPublica, another nonprofit that produces “top-quality investigative journalism.”

Now, this is the very first time I’ve read an opinion that USA Today—which was prescient upon its founding in 1982, understanding America’s appetite for dumbed-down stories—is a quality newspaper. Kinsley takes for granted that The New York Times will always survive, even if digitally, as a bedrock of journalism, another head-scratching prediction, no matter how many public statements its aging management (both business and editorial) issue about the company’s robust future. And though I’m a quite conscientious reader, print and web, I’ve seen maybe one or two citations of ProPublica. Kinsley fails to grasp, at this juncture, most people, including journalists, have vastly diminished attention spans. Wasting time on BuzzFeed quizzes does have an injurious effect on the brain.

So, not much new here. Yet the most off-putting, and a bit mean-spirited, aspect to Kinsley’s column is that he doesn’t spare a word for all the under-30 journalists who can’t find satisfying work, talented men and women who just 15 years ago would be contributing more to the profession than writing public relations copy or spending long days churning out “product” for one of those “bloggy sources of local news.” Years ago, Kinsley was a mentor to such individuals (both at The New Republic and Slate) but apparently he no longer has the inclination or juice to perform a similar role.

Which is why, I guess, he’s now at the retirement home of Vanity Fair.